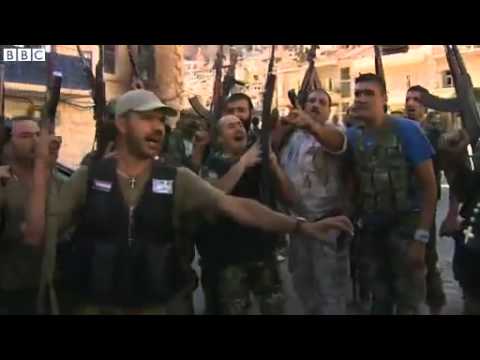 Layal Abu Rahhal reported in Arabic from Beirut for al-Sharq al-Awsat [The Middle East] on the dilemmas of Syrian Christians and their Lebanese neighbors, Dec. 13, 2013. This is my paraphrase, influenced by the translation done by BBC Monitoring:

Considering what the Christians of Syria are facing, Christians in Lebanon are raising alarums about the attacks by the Muslim takfiri (excommunicationist) groups, who say even of other Muslims that they are unbelievers. The problems and concerns of the Christians of the East have worsened in the past two years owing to the crisis in Syria . . . Christians expressed their anger and condemnation when the city of Ma’lulah was attacked and its nuns abducted, given its historic Christian symbolism and the fact that it is visited by almost all Christians of Lebanon. This last month two bishops, Yuhanna Ibrahim and Bulus al-Yaziji, brother of Yuhanna al- Yaziji, Patriarch of Antioch were kidnapped.

Arab Christians, who are among the “minorities” have always had backing from the Christians in Lebanon, who, throughout history, enjoyed privileges and the ability to play a fundamental role. However, the current division of Lebanese Christian leaders into two opposing camps, which differ in approach to Lebanese politics and to the Syrian crisis itself, has caused their influence at local and regional level to be almost nonexistent.

In this context, Syrian opposition Jamil Diyar Bakri of the Assyrian organization in Istanbul, told Al – Sharq al- Awsat that he regretted “the lack of true Christian support first for Christians in Iraq and later for Christians in Syria. ” He said that Christian leaders in Lebanon have no clear plan and do not play any role as defenders of the problems of Christians in the Middle East…

Father George Massuh, director of the Centre for Christian-Muslim Studies at the University of Balamand said . . . we look at Syria as a whole, we do not act on the basis of the targeting of Christians, because all Syria is shedding blood. He stressed that the churches of Christians are not more precious than . . the mosques of Muslims and they are worried with the pain of all the Syrian people.

Massuh stressed … that the Christians of Syria are the only group that does not have militias and has not raised an army. He said that the fortune of Christians usually lies with the state. Therefore there are no armed Christians, with the exception of those in the Syrian army. He added that bearing arms to defend icons and churches is not part of the values ​​of the Christians . Yet no Christian authority wants the shedding of the blood of one of Syria on the hands of Christian militias. . .

, especially Christians of the East in general. ..

Meanwhile , Bu – Habib said that ” targeting Christians does not happen at the hands of the Free Syrian Army, but at the hands of takfiri groups that do not accept others who differ with them, they do not even distinguish between moderate Sunnis and Sunni extremists. . .