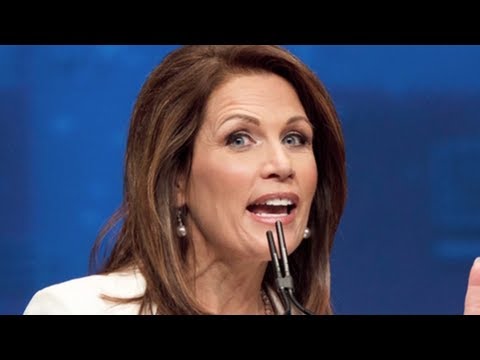 While there didn’t appear to be any public announcements about December’s trip out of Egypt, Lebanon, Libya, or Israel, according to an itinerary provided to The Huffington Post they arrived in Egypt on Saturday December 14, and met Sunday with interim Egyptian President Adly Mansour and Defense Minister Gen. Abdel Fattah al-Sisi.

On December 17 an op-ed penned by Bachmann ran in the Daily News Egypt and was republished on her House web site in which she called on the Obama administration to follow the interim Egyptian government’s decision and designate the Muslim Brotherhood a terrorist group.

“From the time of Hassan al-Banna and the ‘secret apparatus’ staging terror attacks across Egypt and the assassinations of Prime Minister Mahmoud an-Nukrashi Pasha and judge Ahmed El-Khazindar in 1948, to the ongoing attacks on Coptic Christians and churches and the terror campaign targeting the military in the Sinai and elsewhere, the Muslim Brotherhood has always kept terrorism as part of its arsenal and living up to their motto, ‘Jihad is our way,’” Bachmann wrote.

The group then went on to Beirut and then Libya, where they were joined by Rep. Robert Pittenger (R-N.C.) for an eight-hour visit, according to The Huffington Post.

Lebanon’s The Daily Star reported, according to The Washington Post, that US Ambassador David Hale met the trio at the Beirut airport. The group also met with the country’s justice minister, faith-based non-governmental groups, and Lebanese Forces Party’s political leader Samir Geagea. (The Lebanese Forces Party is the second largest party of the Christian community in Lebanon.)

The Lebanon and Libya visits were followed by a trip to Israel where the four, including Pittenger, met with Israeli Prime Minister Benjamin Netanyahu. While a spokeswoman for the Israeli Embassy in Washington confirmed the Israel visit, the details of the Libya trip was not made public. (After leaving Israel they were due to depart for Austria on Dec.19 to meet with far-right political figures, then onto Oslo, Norway before returning to the US on Dec.21 )

This is the second Mideast tour this year that these Tea Party Republicans — Bachmann, Gohmert and King — have made with the express aim of challenging the Obama Administration’s policies in the region.

Though all aspects of US Mideast policy are disturbing to these Representatives, it is Israel that seems to obsess them — and it is a particularly religious view of Israel that underlies their ‘Zeal for Zion.’

Of the three House members Michelle Bachmann has the longest and deepest affiliation with Israel, an affiliation that dates back to her youth. But her colleagues King and Gohmert are no less enthusiastic about the Jewish State.

Particularly upsetting to these three members of Congress is what they characterize as President Obama’s ‘hostile’ policy towards Israel; a policy that Rep. Gohmert has described as a ‘betrayal’ of Biblical import.

In mid-November Gohmert, using the Bible as his guide, spoke about that ‘betrayal’ on the House floor:

“Some of us believe that the Bible is accurate. Certainly, so many prophesies have been fulfilled, and if that is true, this administration, unless they can find a verse that accurately says that those who betray Israel will be blessed, then this country is being dug in a deeper hole by this administration, and its betrayals of Israel’s trust and Israel’s friendship.”

For Gohmert’s supporters, and for many other Conservative Christians, the Biblical reference was crystal clear. In Genesis 12:3 we read of God’s promise to Abraham that: “Those who bless you will be blessed, and those that curse you will be cursed.”

For American Christian Zionists this verse has become as important as John 3:16: “For God so loved the world that he gave his one and only Son, that whoever believes in him shall not perish but have eternal life.”

And in the forums of CUFI (Christians United For Israel), John Hagee’s hugely successful lobbying group, Genesis 12:3 and other biblical verses are constantly invoked. CUFI’s founders have described their group as “the Christian equivalent of AIPAC (American Israel Public Affairs Committee).”

And it was at the 2010 AIPAC conference that Bachmann made clear how deep her attachment to Israel is:

“I have been a long time supporter of Israel. The first time I went to Israel was the day I graduated from high school. I spent a summer working on Kibbutz Be’eri near Beer Sheva in 1974.”

That summer on a kibbutz seems to have made a profound impression on the young Michelle Bachmann. When she was elected to Congress she actively supported the maximalist ideas of the West Bank Settler Movement with which the Israeli government and army is often at odds.

For example, in December 2012 Bachmann proclaimed to American supporters of the Settlers that the northern Samaria town of Bet El “must remain and always will remain a part of Israel.”

As the Jewish Press reported:

“Most of the 1,000 guests at the American Friends of Bet El Yeshiva Center’s 30th annual dinner, last week at the Marriott Marquis on Broadway, continued to applaud vociferously as the Minnesota congresswoman and wannabe Republican presidential candidate expressed her robust support for Israel’s future.”

Biblical views were invoked in her remarks on a possible Hillary Clinton candidacy in 2016. According to Bachmann, Hillary Clinton could be defeated by a Republican candidate if “we repent and cry out to God.”

“On her weekly radio program, Olive Tree Ministries, evangelical radio host Jan Markell asked Bachmann, who represents Minnesota’s sixth congressional district, if she is “one of those who just assumes” that Hillary Clinton will be “coronated” as president after the 2016 race.

“I don’t at all because I look at the story of David and Goliath,” Bachmann responded. “All David needed was one smooth stone to fell the giant. It wasn’t the stone, it wasn’t David, it was the strong right arm of a Holy God.”

While there were no public events in Israel involving the trio, Bachmann, Gohmert and King’s CODEL visit last week was heralded by a Dec. 16 op-ed piece by the Minnesota congresswomen in Israel’s largest circulation English-language newspaper, the right-leaning Jerusalem Post.

In the piece, Bachmann railed against the administration’s diplomatic efforts on the Israeli-Palestinian conflict. In fact in her attack on John Kerry, Bachmann articulated a position somewhat to the right of Prime Minister Benjamin Netanyahu. In contrast to the West Bank Settlers even Netanyahu is reluctant to speak of “the entire biblical Jewish homeland.”

But Bachmann is not constrained by the realities of statecraft.

“While Secretary Kerry pressures Israel to give up its rightful land, our good friend Israel has a goal too: the maintenance of the Jewish State of Israel,” she wrote. “And the right to live peacefully in their entire biblical Jewish homeland, and the right to have Jerusalem as their undivided capital.”

He regularly votes to restrict US funding of the UN and has earned the dubious honor of being considered among the least informed congressmen on national and foreign affairs.

According to Politico, King was voted by his Democratic congressional colleagues “most clueless Republican” at a private Democratic Congressional Campaign Committee dinner.

Even by today’s low standards this is not a very distinguished ‘Mideast delegation.’ But that does not mean that its findings won’t play well in some congressional districts in Minnesota, Iowa and Texas. And perhaps beyond?

Shalom Goldman is Professor of Religion and Middle Eastern Studies at Duke University, and core faculty of the Duke Islamic Studies Center. His most recent book is Zeal for Zion: Christians, Jews, and the Idea of the Promised Land (UNC Press, January, 2010). Goldman has just returned from a month-long research sojourn in Israel.

The Young Turks report on Bachmann’s assertion that we are in the end times: