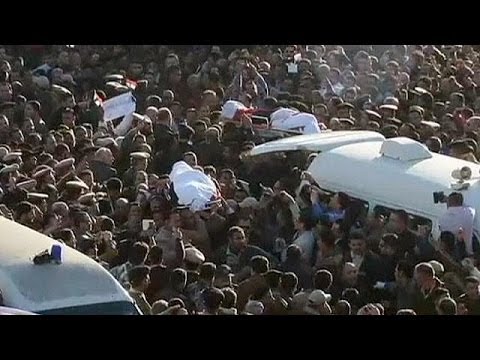 In Egypt, the interim appointed government of Prime Minister Hazem Biblawi, backed by the military junta that made the coup of July 3, on Wednesday formally categorized the Muslim Brotherhood as a terrorist organization. The decree was published by the feared Interior Ministry (kind of like US FBI but with torture) on its Facebook page.

It was a startling further turnaround in the fortunes of the Muslim Brotherhood, founded in 1928 by schoolteacher Hassan al-Banna as a form of political Islam (injecting religion into politics). After being semi-banned during the presidency of Hosni Mubarak (r. 1981-2011), the Brotherhood’s Freedom and Justice Party was recognized as legitimate. It won the parliamentary elections of late fall 2011 and in June of 2012 its standard-bearer, Muhammad Morsi, won the presidency. After a year in office, Morsi’s heavy-handed and sectarian ruling style and a shrinking economy had turned millions of Egyptians away from him. In late June massive public demonstrations demanded that he stand for a recall election. On July 3, the powerful Egyptian officer corps intervened to place Morsi under arrest and to conduct a nationalist coup against Brotherhood rule. In the aftermath, 2000 high Brotherhood officials were arrested, and major sit-ins were cleared by main force, leaving about 1,000 dead (thought that number includes some police shot dead by Brotherhood snipers).

Al-Shorouk Online reports in Arabic that Muslim Brotherhood “activity” is now prohibited as ipso facto a form of terrorism. That is, if Muslim Brotherhood women hold a coffee klatch and discuss worship, they are now engaging in terrorism. It is also terrorism to preach in favor of the organization orally or in writing or any other medium, and it is terrorism to donate funds to the organization.

Continuing to assert that you belong to the Muslim Brotherhood after today makes you a terrorist. The Egyptian government has conveyed its decision to other Arab nations that signed the 1998 anti-terrorism convention.

The armed forces and the police have been charged with with protecting universities and guaranteeing that students will not be safe from the terrorism of this group, and that public edifices are secure.

The decree justified this Draconian step with reference to the blowing up of the security directorate in the provincial city of Mansoura, which killed some 14 persons and wounded 140, some of them high-ranking police or domestic security officials. Yet the placing of the Brotherhood in the category of terrorist organization was carried out, al-Shorouk notes, before any formal inquiry into the Mansoura bombing and before there was clear evidence of Brotherhood involvement.

Muslim Brotherhood activists, undeterred, announced that they would publicly demonstrate on Friday without a permit against the decree, under the rubric of “The coup is terrorism.”

Egyptians on social media pointed out that the military government of Col. Gamal Abdel Nasser (r. 1954-1970) had attempted similarly to ban and extirpate the Muslim Brotherhood but had failed.

The core support for the Brotherhood probably stands at around 20% of the country, and obviously another 31%, not themselves adherents of political Islam, would be willing to vote for or support the Brotherhood’s civil party under the right circumstances. If the US declared 20% of Americans terrorists, that would be 60 million people and it would cause a lot of trouble to attempt to marginalize them all.

Other Egyptians on Facebook or Twitter expressed the conviction that the military government stigmatized the Brotherhood in this way so as to have a way of damning any sort of oppositional activist as a terrorist.

Dalia Ziyada of the Ibn Khaldoun Center for Human Rights asked President Adly Mansour to define more exactly what terrorism is and how the category is arrived at, and asked him to issue a list of terrorist organizations in Egypt. She vowed to continue to try to get the US and Europe also to brand the Muslim Brotherhood a terrorist organization.

Muhammad Abu Hamid, a former member of parliament, accused the April 6 Youth Organization, a secular left-of-center group, of having been a mere tool whereby the Brotherhood overthrew the Egyptian government.

This sort of accusation shows the ways in which, once one major political group in Egypt is made taboo, the taboo can be spread to other, unrelated groups merely because they oppose the military government.

The true enormity of what Egypt’s military junta did on Christmas Day, 2013, won’t become apparent immediately. But over time it will likely destabilize the country and contribute to a revival of political Islam and of Muslim terrorism.

It will also further damage the prospects of democracy in the region. Why would any group risk playing the democratic game if they thought at any moment all their electoral victories could be wiped out and they could find themselves behind bars (after having had the presidency!) and accused of terrorism.