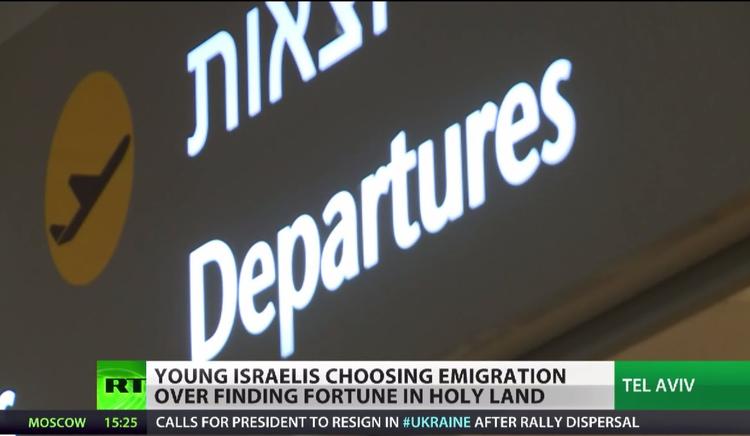 Uri Avnery discusses the issue of young Jewish Israelis leaving Israel for other countries, including Germany. Israel’s out-emigration rate was similar to other industrial countries a decade ago, but it is possible that it has increased because of the rise in rents and property values and the increased divide between poor and rich. Many young Israelis find it less expensive to live in places like Berlin, where they also often are better paid than they would be at home.

I wrote about this issue a couple of years ago:

“ [pdf] There are about 7.8 million Israelis, including 5.8 million Jewish-Israelis and 1.6 million Palestinian-Israelis (there are also three hundred thousand persons who are simply not Jewish. Within this group, there are some whose mothers were not Jewish and so are not counted officially as Jews, even though they might consider themselves Jewish and hold Israeli citizenship. Others have no claim on Jewishness at all. Neither group is being allowed to convert in any numbers by the Chief Rabbi).

Over time, the proportion of Palestinian-Israelis in the population will rise, and the number of Jews who do not strongly identify with Israel will likely do so, as well. Ian Lustick has argued that [pdf] in recent years the number of Jews who departed Israel probably equaled or exceeded the number who came in, so immigration as a method of retaining a Jewish majority is no longer viable.

Lustick [pdf] also quotes Israeli officials who estimate that up to a million Israelis live outside that country, some 600,000 in North America. Both Israel’s present and its future would look a lot different if Israel could entice these expatriates back. That was the point of the ads. Obviously, if Israeli-Americans intermarry with and assimilate into the Jewish-American community, they are unlikely to return to Israel in any numbers; indeed, if their children adopt Jewish-American ways and intermarry at high rates with non-Jews, a large proportion of their descendants wouldn’t even be eligible for full citizenship as Jews in Israel.

There are no further big Jewish communities that are likely to emigrate to Israel. Few American Jews want to live there. Some 50 percent of American Jews marry out into other communities, something that cannot even be done inside Israel. My suspicion is that more Israelis emigrate to Europe nowadays than European Jews emigrate to Israel. The Israeli Jews of European ancestry (Ashkenazim) and most of those originally from the Middle East (Mizrahim) have increasingly small families. An estimated 70-80 percent of Israeli Jews have other passports, just in case they need to jump ship, and a quarter of all Israeli academics live abroad.

The two populations in Israel with the youngest median age and the greatest likelihood of increase in numbers in the future are the Palestinian-Israelis and the Haredis or ultra-Orthodox Jews. These two groups will, through the 21st century, eclipse the Ashkenazi or European Jews, as well as the non-Haredi Eastern Jews. By 2030, 55% of Israeli school children will likely be either Palestinian-Israeli or Haredi, and they will be 47% of 15-19 year-olds, as well. (See this paper [pdf] by Richard P. Cincotta and Eric Kaufmann.) That is, by 2050 or 2060, if current growth rates continue and no dramatic changes take place in their political status, Palestinian-Israelis and Haredis will comprise a majority of voters outside the elderly.

Note that I am speaking of Israel proper, leaving aside the Palestinians of the West Bank and Gaza, which Israel is likely also to inherit, since it won’t give them a state of their own. But leave that issue aside for the moment.

The problem for Israeli nationalists is that neither Palestinian-Israelis nor Haredim are typically Zionists. The Ultra-Orthodox often reject the legitimacy of the state of Israel because they believe only the Messiah can establish a Jewish state and rule Jerusalem, and it is hubris for secular Zionists to make the attempt.

Palestinian-Israelis will probably be 30% of the Israeli population by 2030. Although they would not get along with Haredim on most issues, both communities avoid service in the Israeli army (with the exception among Palestinians of the Druze). Neither will be dutiful taxpayers. An Israel made up of a joint majority of Palestinian-Israelis and Haredis will be militarily and financially weak.”