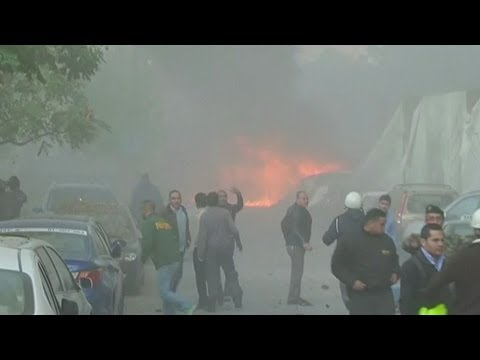 Respected Lebanese politician and former ambassador to the United States, Muhammad Shatah, was assassinated by a massive car bomb near the parliament building on Friday. He was on his way to a meeting of the Future Party. He was an adviser to former prime minister Saad Hariri of Future, whose own father (Rafiq al-Hariri) was killed in a similar bombing in 2005.

Hariri and the late Muhammad Shatah hail from the Sunni community of Lebanon. Shatah had been a vocal critic of Syrian president Bashar al-Assad. The senior Hariri had also fallen out with al-Assad and then got blown up. In fact, Friday’s bombing was only meters away from where Rafiq al-Hariri was killed.

In the aftermath, the March 14 movement was formed that successfully pushed Syrian troops out of Lebanon (they had been sent in in 1976 by an Arab League resolution in forlorn hopes of ending the Lebanese Civil War that raged 1975-1989). Although Syrian troops left, vocal critics of the Baath regime in Beirut, both on the left and on the right, were assassinated one after another in 2005-2006. Suspicion naturally fixed on the Baath secret service on on a covert unit of the Hizbullah party-militia, which is supported by Syria and by Iran.

In spring of 2013, Hizbullah sent fighters over the border into Syria to help expel Sunni rebels from town of Qusayr. At the same time, radical Salafi Sunnis from Sidon in Lebanon went to the front to support the Sunnis. So Shiite Lebanese were fighting Sunni Lebanese in Qusayr. The Shiites won, with the backing of the Syrian army, the officer corps of which is dominated by the Alawite Shiite sect. There isn’t much religious solidarity between Hizbullah and the Alawites, who hail from very different Shiite traditions (think Catholic vs. New Age Christians). But Hizbullah cannot get resupplied by Iran with rockets and other munitions without the Syrian land bridge from Shiite Iran, which might be closed if radical Sunnis take Damascus.

Shatah, a former minister of finance from the northern port of Tripoli, was an urbane moderate. leaving only radicals who could easily be marginalized and defeated as mere terrorists.

Some observers, however, are wondering if Shatah was the real target, implying that the assassins may have actually been trying to kill someone more senior, someone perhaps like Saad Hariri himself.

March 14 has been demanding greater representation on the Cabinet, and some saw the bombing as a warning to the party not to demand more.

Saudi Arabia is backing Syrian Sunni rebels against the Baath government, which is dominated by Alawite Shiites. Saudi Wahhabis typically despise Shiite Islam and some even denounce it as a form of idolatry. The elder Hariri had gone to Saudi Arabia for business and had become close to the Saudi monarchy, so that the Hariris were in part seen as Saudi Arabian allies in Lebanon. The triangle of Saudi Arabia, the Syrian Sunni rebels, and the Lebanese Sunnis represents one side of the current struggle in the Levant. On the other side, Iran, Baathist Syria, Lebanese Shiites, and many Lebanese Christians are allied against the Sunni opposition.

This fall, a bomb was set off near the Iranian embassy in Beirut Hizbullah alleged that this bombing was financed by the Saudis.

Shatah’s assassination thus continues a tit for tat underground war between Saudi Arabia and Iran, between the Sunnis and the Shiites, between anti-Assad and pro-Assad forces in Lebanon.

The moderate Sunnis of the Future Party are in no position to pursue any sort of reprisals against any suspects. But the pundits who are convinced that this situation cannot evolve into a more heated struggle between Sunnis and Shiites in Lebanon are engaging in some wishful thinking.

And here is a Future TV broadcast that was interrupted by the bombing: