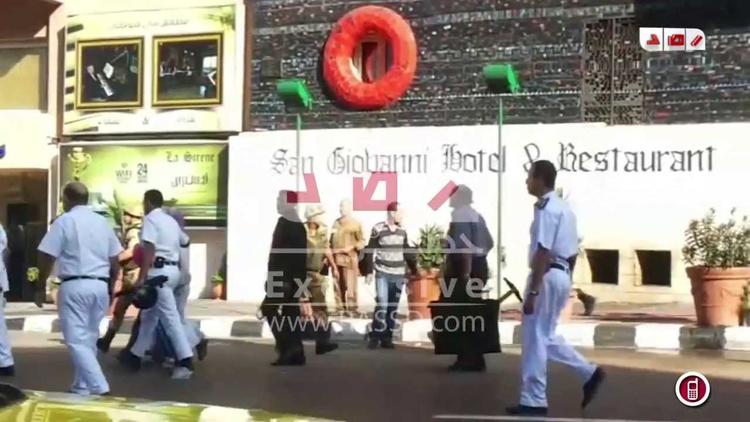 The Sidi Gaber Minor Offenses Court on December 7 commuted the sentences for the 21 female Brotherhood protestors. The 14 young women received a 1 year suspended sentence, while the 7 girls were ordered to be released subject to the three months of probation.

(New York) – The conviction on November 27, 2013, of 21 peaceful pro-Morsy female protesters violates their right to freedom of assembly. Prosecutors should immediately drop the charges and withdraw their challenge of the women’s appeal, which the Sidi Gaber Minor Offenses Court in Alexandria will hear on December 7.

The convictions come amid a nationwide crackdown on Muslim Brotherhood supporters, including mass arrests of protesters demonstrating against the army’s ouster of Mohamed Morsy, and the authorities’ refusal to hold security forces accountable for killing protesters. Human Rights Watch’s review of the court’s judgment and evidence found that the defendants’ rights to a fair trial appear to have been violated by the failure to allow any witnesses to testify in their defense. There also appeared to be no credible evidence in the court’s ruling that any of the 21 were engaged individually in the alleged crimes.

“Egypt’s courts have sent a dangerous message that they will sentence Muslim Brotherhood supporters to long prison terms if they dare to protest,” said Sarah Leah Whitson, Middle East and North Africa director. “Prosecuting these young women for participating in a demonstration, while security forces who killed hundreds of protesters roam free, should shock our collective conscience.”

The Sidi Gaber Minor Offenses Court convicted the women and girls, all but three between the ages of 15 and 19, in a single four-hour hearing. They were charged with vandalism, thuggery, and rioting; illegal public gathering; and the use of weapons during an early morning protest on October 31 against Morsy’s ouster as president.

After refusing to allow the defendants’ lawyers to call any witnesses, the court sentenced each of the 14 women over age 18 to 11 years and one month in prison. The seven younger girls were sentenced to be held in a juvenile facility until they turn 18, at which point their cases will be re-evaluated. Six men accused of calling for the protest were sentenced in absentia to 15 years in prison each.

In the early morning of October 31, about 200 activists in the “7 am movement,” closely associated with the Muslim Brotherhood, held their inaugural protest on the Alexandria waterfront, three supporters of the movement told Human Rights Watch. The movement included many students at Alexandria University and other nearby schools, who had taken minibuses from their homes to participate before class, the supporters said.

The mother of one of the convicted women, a 19-year-old student, told Human Rights Watch that her daughter and other protesters wanted to draw attention to classmates who had recently been arrested as a result of their political activism.

Demonstrators assembled in the eastern Sidi Bishr neighborhood of Alexandria and marched west, chanting against the police and military. As the procession turned onto Syria Street, past the Stanley Bridge, police dispersed protesters using teargas and water cannons. Human Rights Watch reviewed video footage that shows police chasing demonstrators after they dispersed and appearing to assault those they caught, then taking them away, apparently to detention.

Police arrested 22 people, according to the League for the Defense of Detainees in Alexandria, a group of lawyers associated with the Muslim Brotherhood formed after the military ouster of Morsy on July 3 to represent those arrested in the protests that followed. Although both men and women participated in the demonstration, 21 of those arrested were women and girls. Police released the only man among those detained the same day, the league said.

Eighteen of the women and girls are students between the ages of 15 and 19, according to the police report of the incident, which Human Rights Watch reviewed. A list protest organizers provided to Human Rights Watch indicated that two others are 22-year-olds who graduated this year, and the final detained woman is the mother of one of the 15-year-olds.

Two of the lawyers representing the convicted women and girls told Human Rights Watch that some of those convicted had not taken part in the demonstration, but had simply been in the wrong place at the wrong time. The lawyers also said that prosecutors had prevented them from meeting with their clients before their initial interrogation by the prosecutor and that the court had refused to allow them to call witnesses to the stand during the trial.

Prosecutors hastily brought the case to trial on November 27, even as hundreds of others arrested in protests across Alexandria remain in pretrial detention. In its judgment, the court relied heavily on the accounts of police and national security officials to establish that there had been thuggery and rioting, but provided no direct evidence that any of the women and girls had themselves engaged in these acts. The accounts from the officials alleged that protesters had disrupted traffic and blocked roads based on instructions from the Brotherhood Guidance Council to cause chaos in the days before Morsy’s trial.

The court also charged the women and girls with violating Egypt’s draconian 1923 Public Assembly Law. The law infringes on freedom of association by enacting criminal penalties solely for participating in unannounced or unapproved demonstrations, Human Rights Watch said. Freedom of association is guaranteed by the International Covenant on Civil and Political Rights, which Egypt signed in 1982.

The judgment identified a single weapon it claims protesters carried: rocks. However, it provided no evidence that the accused women had themselves carried or thrown rocks.

To support the vandalism charge, the judgment identified a single damaged glass door and the testimony of three doormen about damages to other local shops and cars, although it did not provide any evidence or allege that any of the convicted women caused any of this damage.

“Putting aside the blatantly political nature of this prosecution, the authorities failed to meet even the most basic standards of evidence to prove these women and girls engaged in violence or thuggery,” Whitson said. “The lack of any evidence tying these women and girls to a crime only strengthens the impression that this was a sham prosecution.”

The harsh sentence starkly contrasts with the failure of judicial authorities to hold security officers responsible for killing protesters. In spite of the killings of more than 1,300 protesters in the past five months, security forces have only opened an investigation into a single incident – the deaths of 37 detainees en route to Abu Zaabel prison on August 18 – and have yet to establish a fact-finding committee to account for the killings of protesters.

Over the past three years, courts have convicted only a few police officers of crimes in connection with the killings of more than 2,000protesters by security forces. The police officers’ sentences have been comparatively lighter than sentences for protesters. The only officer charged in relation to the November 2011 protests on Mohammad Mahmoud Street that resulted in 45 protester deaths received a three-year sentence, even though video footage captured him shooting a protester in the eye.

The authorities have rounded up thousands of Muslim Brotherhood supporters after dispersing protests over the last four months. Many are still in pretrial detention facing charges similar the ones brought against the Alexandria women and girls. In one of the few other cases that has gone to trial, aCairo court on November 13 handed down 17-year sentences and 65,000 LE (US$9,440) fines to 12 students from al-Azhar University for charges stemming from involvement in protests and clashes on the campus.

In recent weeks, Egypt has further cracked down on the right of assembly, using a highly restrictive new protest law to violently dispersepeaceful demonstrations, including by college students,and to arrest high-profile activists.

“This prosecution fits into Egypt’s new normal – clamping down on protests, and criminalizing dissent,” Whitson said.

Mirrored from Human Rights Watch under their Creative Commons License.

Euronews reports on Egyptians’ reaction to the country’s new protest law under which the women discussed above were charged: