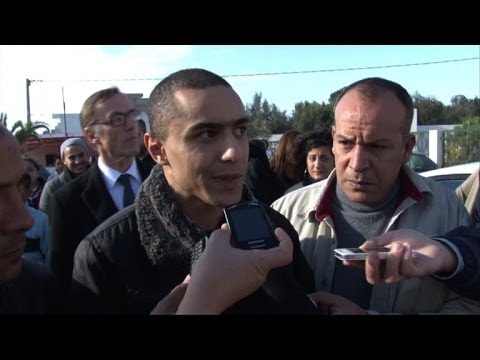 “Rapper Ala Yaacoubi, known by his stage name Weld el 15, turned himself in to a court in Hammamet today, where his 21-month prison sentence was reduced to four months.”

He was sentenced for public indecency (because of his rap lyrics) and for insulting officers of the state (his most famous rap song is “The Police are Dogs.”)

Police in Tunisia felt unfairly blamed for the excesses of former dictator Zine El Abdin Ben Ali in the aftermath of the 2011 revolution, and elements in the bureaucracy originally appointed by the Ben Ali government, who are still in office, have pushed back against revolutionary youth culture. Some of the officials have been replaced by or now have as their superiors supporters of the Muslim religious party, al-Nahda or Renaissance. Many secularists suspect al-Nahda of influencing the tone of such prosecutions, and of trying to make Tunisia a conservative Muslim state.

AFP reports the rapper as saying,

Nawaat.org argues that Weld el 15 should not be politicized because his song, “The Police are Dogs,” is about their harassment of drug users, not about human rights.

That Tunisia is stepping back from the new freedom of expression gained in 2011, however, is certainly clear. Weld el 15 is not the only rapper to be charged and is the second to be jailed on similar charges.