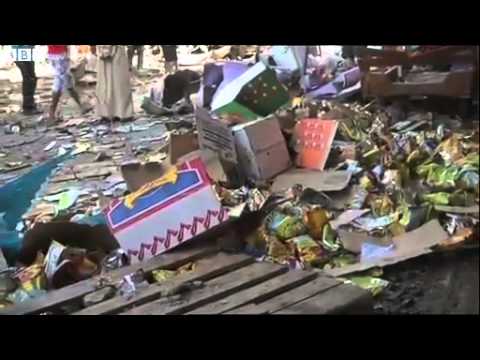 It is estimated that around 250 car bombs exploded in Baghdad last year. This year the numbers are climbing and bombers’ skills are improving. This is taking a heavy toll on ordinary Iraqis. More locals are suffering from stress disorders and living in fear. Hospital morgues are crowded and some families have run out of room to bury their dead.

Every morning Baghdad woman, Nahida al-Allusi, says goodbye to her three children – they are all grown up, one is a student and the other two have jobs. And as they leave she only hopes desperately that they will return home again.

“Baghdad has become unbearable,” she says. “Car bombs are continuously exploding and I am just so afraid that my children will be near one, when it goes off. Every day I ask God to keep them safe and every day I call them several times to make sure they are still alive.”

Al-Allusi is not alone in her anxiety. This is the situation for many Baghdadis today.

According to figures from the Iraqi Ministry of the Interior, 500 car bombs exploded in 2013 and around half of them exploded in Baghdad. The bombs haven’t spared anyone – cars loaded with explosives have been parked near schools, mosques, markets, hospitals and government buildings. And the bombers target everyone equally – it doesn’t matter whether one is Shiite Muslim, Sunni Muslim, Christian or Kurdish – all are under threat from car bombs. Everyone and everywhere is a target.

Recently though, the pace of bombings seems to have picked up and the attacks have become better coordinated. Dozens of cars explode in a day, within a short space of time, all over the city – which challenges the resources of local security forces.

Over the past week there have been around 25 car bombs exploded in Baghdad – a city of around 7 million now lives in continuous fear that they will be the next to stand by a bomb on wheels.

In a café in the affluent, central Baghdad neighbourhood of Karrada, three patrons are discussing the car bombs.

“It’s like living in a war zone,” one of them says angrily, dragging on a cigarette. “The explosions defeat the soldiers and harvest our souls.”

“We’ve just become so used to losing people to car bombs,” agreed his friend mournfully. “It feels like we’re just waiting our turn to die.”

He turned in his seat and pointed to a car parked nearby. “That car looks like it will explode,” he said, half-joking. “Now that we’ve said that, it probably will.”

There are hundreds of checkpoints all around Baghdad. Yet they don’t seem to be able to prevent the car bombers from planting explosives. Recently a terrorist apprehended by the government had his confession broadcast on television; he said that car bombers easily cross checkpoints and that they do it all the time.

In the Shaab neighbourhood, in Baghdad’s north east sector, there are five policemen standing at one of these checkpoints. Thousands of cars pass them every day. They don’t really have any sophisticated methods of checking the cars and trucks that go by. Sometimes sniffer dogs are used. And the bogus bomb detectors sold to the Iraqi government for millions – the seller has since been jailed in Europe – are also still used. Because of this the policemen can’t stop every car. So they pick cars for inspection at random.

“We are just chasing ghosts,” the officer in charge of the checkpoint told NIQASH. “We don’t know when and how they will attack. We can’t do anything if there’s no fire fight – other than carrying out the injured and taking corpses to hospital.”

When a car bomb explodes the people of Baghdad live through the scene as if they were in some Hollywood movie. After hearing about, or actually hearing, an explosion people rush towards it or rush away; many immediately text or call friends and relatives to make sure they are still alive.

The tragedy continues after the bomb goes off. Often the badly injured die on the way to hospital because of the ensuing traffic jams.

One of the doctors in a Baghdad morgue tells NIQASH that he suspects there are more deaths as a result of car bombings at the moment, than from natural causes. “We run out of room in the refrigerated morgue,” he says, adding that the worst cases are those where the victim has lost any features that could identify them, such as their head or extremities.

The families of the dead then face additional challenges. The tradition for many Baghdadis is to bury their dead in the holy city of Najaf and often at the historic Wadi Al Salam [Valley of Peace] Cemetery, one of the largest cemeteries in the world.

“We always prepare graves for the deceased but on the days when there are car bombings we simply don’t have enough space and we always need to dig more,” says Ismail Mohammed, an undertaker at Wadi Al Salam.

This has seen some families going to Karbala, another holy city for Shiite Muslims, to bury their dead.

The fallout from car bombings continues even among those who may not have been physically injured. There seems to be more post traumatic stress in Baghdad than there used to be – victims hear noises or become obsessed with the idea of car bombs. Previously Iraqis may well have visited religious men or faith healers after a traumatic experience like a car bombing. But now they are starting to visit psychologists.

NIQASH visited a clinic in the Sadoun neighbourhood of Baghdad. There were dozens of clients in the waiting room.

“The car bomb explosions cause mental illnesses that can actually be more serious than some physical injuries,” the doctor on duty there, Mudar Mohammed, explained. “Many who come here say that they are worried because their behaviour has changed after a car bomb exploded near them, they say they are more nervous, they’re tense all the time and they’ve lost sexual function. Others cannot sleep at night without taking some sort of sedative.”

Many angry locals are criticizing local security forces because of the current increase in car bombs, saying they must find a way to stop them. However experts in the field are more critical of police performance after a bombing incident.

“The Criminal Evidence Directorate of the Interior Ministry should be inspecting the site of the bomb and collecting evidence immediately after a bomb explodes,” says Asad Yassin, a security specialist. “They should be looking for the kinds of explosives used as well as any other evidence that might help to find the culprits or those who planned the attack.”

“But what usually happens is that there’s chaos after an explosion. A huge number of people are there and victims are taken to hospital and wreckage is removed. Then the scene is usually hosed down,” Yassin told NIQASH. “Which leads to the loss of any potential evidence.”

Somewhat ironically the building used by the Criminal Evidence Directorate was damaged by a car bomb in 2010; this led to deaths of senior officers as well as the loss of many documents and evidence that had been gathered previously.”