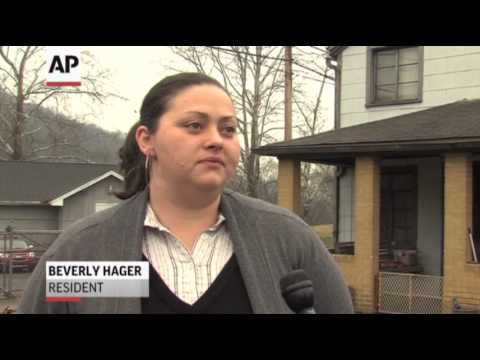 Some 300,000 West Virginians are at risk from their tap water after a company making MCHM spilled it into the river, turning it a little purple and making it smell like liquorice. MCHM can be fatal if imbibed, and otherwise it can make you vomit your guts out. It is used to wash coal of impurities.

Coal is destroying the earth. Some 40% of US carbon dioxide emissions come from burning coal. That amounts to 2 billion metric tons of CO2 annually that Americans spew into the atmosphere by burning coal. Carbon dioxide is a greenhouse gas, extra amounts of which have been building up in the atmosphere since the Industrial Revolution and it is warming the earth and the seas inexorably. Humankind only has to 2020 to avoid going beyond a temperature increase of 3.4 degrees Fahrenheit. If we go to 7, 8, 9 degrees F. increase, the whole weather system could become chaotic, threatening human life.

But apart from the threat burning coal forms in causing climate change, it is just really bad for you. Burning it releases massive amounts of mercury into the environment. Mercury is a nerve gas. It isn’t normal that you can only eat fish once or twice a week for fear of being mercury-poisoned. There is some evidence that it may be implicated in the increase in autism among children. Burning coal kills 13,000 Americans each year. That is four 9/11 attacks every year. We had a war on terror, but no president dares announce a war on coal.

And now it should be clear that some of the chemicals used in producing coal for power plants are themselves highly toxic and form a constant health threat.

It doesn’t have to be this way. Wind power is just about as inexpensive as coal, now. The American Midwest, the most highly coal-dependent region in the country, is the Saudi Arabia of wind. And, it has substantial potential for solar power generation, as well.

There are already as many American jobs in the solar power industry as there are American workers in coal mines. The workers can be retrained to install solar panels on people’s roofs.

The US and the world need to make a final push to go as green as possible as soon as possible. Coal is a drag on any such effort.

For the evils of coal see: