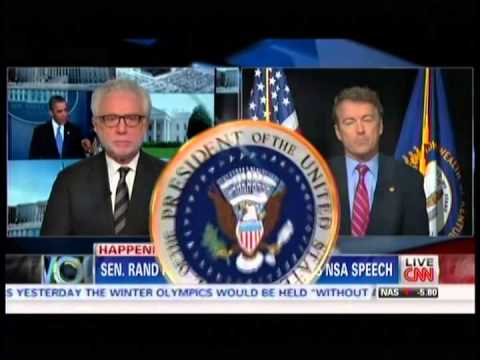 In his speech on the National Security Agency domestic surveillance program on Friday, Obama offered an explanation of its origins:

“The program grew out of a desire to address a gap identified after 9/11. One of the 9/11 hijackers – Khalid al-Mihdhar – made a phone call from San Diego to a known al Qaeda safe-house in Yemen. NSA saw that call, but could not see that it was coming from an individual already in the United States. The telephone metadata program under Section 215 was designed to map the communications of terrorists, so we can see who they may be in contact with as quickly as possible.”

This is, of course, a steaming crock of crap. The fact is that Khalid al-Mihdar was under surveillance and so was his contact in Yemen. The US even had videotape of al-Mihdar at an al-Qaeda summit in Kuala Lumpur shortly before he went to San Diego. And US intelligence knew that al-Mihdar was in the United States.

The problem? The various intelligence agencies were each looking to make their own bust and refused to properly share information with one another.

They don’t need to spy on all of our smartphone information and track 310 million people’s telephone calls and whereabouts! They need to talk with each other there in Washington! And in fact there is a joint FBI/ CIA facility in the DC area now where files can be accessed by officers with the right clearances across agencies.

Obama’s anecdote simply does not support the case for holding phone metadata, either in the government or by private telcos. And since I don’t think Obama is ignorant or lacking in smarts, I think he and whoever crafted that reference to 9/11 into his violent assault on the Fourth Amendment were doing so in a calculated and wholly dishonest fashion.

Obama was from 2007 frank that he admired Ronald Reagan. What you’re a little afraid of is that he may harbor some sneaking admiration for Tricky Dick Nixon.

“In September 2002, agents and officials from the CIA and FBI testified before a joint congressional panel about how their security agencies failed to fully share information about suspected terrorists and their activities in the months leading up to the Sept. 11 attacks.

As much as anyone working in counterterrorism, John O’Neill knew about this communication breakdown. In fact, just two months before Sept. 11, in a speech to Spanish police on interagency cooperation, he had asked his audience, “How much more successful could we all be if we really knew what our agencies really knew?” O’Neill’s last major FBI investigation — the attack on the USS Cole on Oct. 12, 2000 — was a case study of just how bad inter-agency communication had become.

-The Critical Meeting in Malaysia

The story of this intelligence failure begins with a 1999 CIA breakthrough — the interception of communications from an Al Qaeda logistics center in Yemen about a meeting of operatives that would take place in January 2000 in Kuala Lumpur, Malaysia. The names of two of the participants were mentioned: Khalid Almidhar and Nawaf Alhazmi.

The CIA tracked Almidhar on his way to Malaysia. An agent told FRONTLINE that during a passport check at a stopover, the CIA even got access to his Saudi Arabian passport and learned Almidhar had been issued a multiple-entry visa to the U.S.

Once in Kuala Lumpur, the Al Qaeda operatives were photographed — at the CIA’s request — by Malaysian authorities at a series of meetings. Reportedly, no sound recordings were made, but intelligence sources now believe the meetings were held to plan future Al Qaeda attacks. Among the men captured in the surveillance photos were:

Almidhar and Alhazmi (later hijackers of American Flight 77 which flew into the Pentagon on Sept. 11);
Ramzi bin al-Shibh (a Sept. 11 co-conspirator and Mohamed Atta’s roommate. It would not be until after Sept. 11 that bin al-Shibh would be identified in the Malaysia surveillance photos);
Tawfiq bin-Atash — AKA “Khallad” (a suspected intermediary between bin Laden and plotters of the October 2000 USS Cole attack).

The CIA maintains that it did notify the FBI by e-mail of the Malaysia meetings soon after they occurred — and that it did mention Almidhar had a U.S. visa. The FBI, however, states they have no record of this notification.

The CIA admits that it did not inform the bureau that after the Malaysia meetings ended, it tracked Almidhar and Alhazmi to Los Angeles. The CIA further admits that it failed to warn the INS or the State Department, and as a result, the men’s names were not added to a terrorist watch list. ”