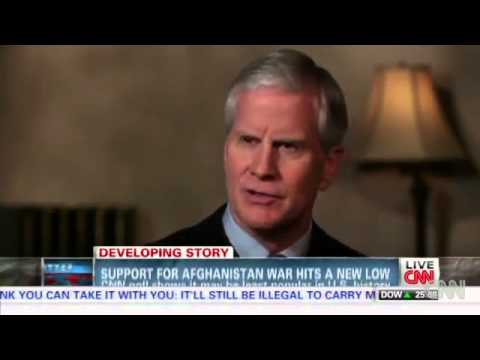 Among the charges in former Secretary of Defense Robert Gates’s memoirs against Barack Obama is that the latter did not trust his generals, did not adopt the Afghanistan War as his own, and was skeptical of the Pentagon plan for a troop escalation and a big counter-insurgency push.

It is now forgotten that Obama came into office in January of 2009 undecided about what course to pursue in Afghanistan. He had opposed the Iraq War and was clearly intent on getting out of that country (which was just as well since there was no prospect that an American troop presence would ever have resulted in social peace there). But on Afghanistan, Obama had more of an open mind. He wanted to destroy al-Qaeda, and putting resources into that fight might require a base of operations in Afghanistan.

According to Bob Woodward, Obama asked the Pentagon for three possible plans — a minimalist one, a medium one and a maximal one.

Vice President Joe Biden favored getting mostly out of Afghanistan and dealing with remaining threats through counter-terrorism tactics. I.e., Biden urged giving up on trying to secure the whole (very large and rugged) country. Where a terrorist gang popped up, they should be dealt with.

Gen. David Petraeus and others in the Pentagon, as well as Bob Gates himself, did not present Obama with the three plans. Months went by. It got to be October of 2009, and Washington began carping that the new president had no Afghanistan policy. The Pentagon in the end only gave Obama one plan, a plan for a troop escalation of 40,000 and an open-ended big war that would serve as a social engineering laboratory for David Petraeus’s theories of counter-insurgency. Petraeus, like T. E. Lawrence before him, came to believe that he was far more central to the story than he was. The Iraq “surge” of 2007 involved disarming Sunni guerrilla groups first, allowing the Shiites to ethnically cleanse them in Baghdad. The monthly death toll started coming down because the civil war in mixed neighborhoods couldn’t be pursued when the neighborhoods weren’t mixed any more. Petraeus saw the sole explanation of the falling death toll rather as the impact of his counter-insurgency principles.

Petraeus wanted an opportunity to prove that counter-insurgency would work in Afghanistan. It involved US forces *taking* territory from the Taliban. Next, they would *clear* the area of enemy fighters. Only in a cleared area could they hope to get locals to cooperate with them. Then they would *hold* the territory for months or years, so as to demonstrate to locals that they could be trusted. One obstacle to local cooperation with US troops was the locals’ realization that they had to live with the Taliban forever but the US military was there temporarily. Choosing the Americans could lead to reprisals once the foreigners departed. Counter-insurgency involved reassuring them that the US military mission was long-term and they did not have to worry about the revenge of the Taliban. Finally, they would *build* the area, increasing local governing capacity, improving infrastructure and improving policing, so as permanently to deny the Taliban any chance of coming back.

Obama did cut the troop escalation down to 30,000, and he turned the tables on the generals by boxing them in. He announced that the troops would begin being taken back out by a date certain, after which the war would wind down. Obama did not want any open-ended commitment to active war-fighting.

The officers Obama was dealing with were known to be insurbordinate and bullies. Gates admits that Petraeus once threatened the Secretary of Defense when Gates tried to pressure the general over Iraq policy. “I can make your life miserable,” he quoted Petraeus as telling him to his face.

Woodward reported that once when Petraeus felt that the White House had undercut him, he said “They’re fucking with the wrong guy.” Moreover, Petraeus and some of the others had a big PR operation and were always going on television even when they had been told by their superiors not to. Petraeus even once went on CNN from the White House briefing room. Stanley McChrystal’s contempt for the White House team was later revealed in Rolling Stone by Michael Hastings.

It is entirely understandable under these circumstances that Obama did not trust the officers who “boxed him in,” who disobeyed him when it came to self-promotion on t.v., and who went around viciously threatening people in the tones of a bad DeNiro impression. It is further understandable that Obama entertained the severest doubts about the feasibility of Petraeus’s big counter-insurgency push. At best, he was willing to give it a try.

Back in 2010 and 2011, Petreaus’s and McChrystal’s PR machine made sure we knew all about a supposedly major counter-insurgency operation in Marjah. It later became clear that Marjah was just a set of small villages. It was promised a “government in a box” from Kabul, which didn’t even have a government in a hat. The US took the scattered villages and chased away the Taliban, then brought in Afghanistan National Army troops. Marjah is Pushtun. A Hazara general came down to meet with the villagers. Pushtuns sometimes look down on Hazaras, who are Shiites and often disadvantaged, so it probably wasn’t the best optics.

Three years later, people in Marjah were still afraid to go out at night. Is that a failure of “holding”? or of “building.” Maybe of “clearing.”

Then the counter-insurgency plan went to Qandahar, a city of 1 million. It was like writing one’s name in water. The US intelligence establishment doesn’t think there have been any permanent gains in security there and fears that the Taliban will just take back over after the US leaves.

You have to conclude that Gates resents Obama for outmaneuvering him and some of the more gung ho officers. Obama didn’t intend to go on fighting and nation-building in Afghanistan forever. Indeed, US forces are no longer in the lead in military operations and soon they’ll be gone or be little more than troop trainers.

If anything, Obama could be faulted for giving the COIN (“counter-insurgency”) officers the benefit of the doubt and playing along with their completely unrealistic plans. He should have listened to Joe Biden, who has long experience in foreign policy and is most often right (unlike Gates). If Gates is right and Obama distrusted the generals pitching them and was skeptical of the strategy itself, it has to increase your estimation of Obama. Our estimation of Gates, in contrast, can only fall because of his disloyalty and his naive approach to Afghanistan.

CNN reports that only 17% of Americans support the Afghanistan War.