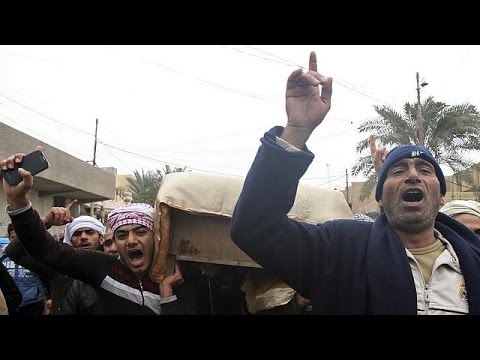 There were conflicting reports on Sunday morning about whether the Iraqi government and its allied tribal levies had regained control of the western city of Falluja, which had fallen to the Islamic State of Iraq and Syria (ISIS or ISIL) on Saturday. What was not in doubt was that some in the leadership of the GOP have a screw loose when it comes to foreign affairs.

Sens. John McCain (R-AZ) and Lindsey Graham (R-SC) tried to blame President Obama for the al-Qaeda presence in Falluja, saying that he had been wrong to withdraw all US troops from Iraq in December of 2011.

McCain and Graham decided to invade Iraq with no justification in international law, overthrow its government, dissolve its army, fire most Sunni Arabs from their jobs, and dissolve most of the state-owned industries, creating massive unemployment. What did they expect to happen? In contrast, Obama opposed the Iraq War when he was in the Illinois Senate.

McCain and Graham are wrong on this matter for the following reasons:

1. The Iraqi parliament rejected a Status of Forces Agreement with the US on George W. Bush’s watch and refused to reconsider. Without a SOFA, as Sen. McCain knows very well, US troops could not engage in combat without risking being brought to Iraqi courts and charged with war crimes.
The only way Obama could have kept troops in Iraq would have been to invade the country all over again, abolish parliament and install a puppet government that would invite the US to stay. Actually, that is exactly what Leonid Brezhnev did in Afghanistan. How did that work out for the Soviet Union? In fact, McCain pursued in the 1980s more or less allied with Muslim holy warriors against the Soviets in Afghanistan, contributing the the rise of . . . al-Qaeda. So we have seen this picture.

2. The Islamic State of Iraq and other extremist Sunni fundamentalists controlled city quarters of Falluja while the American troops were there! The US invaded Falluja twice directly in 2004 and then conducted a proxy campaign there in 2007-8 using tribal levies (the “Awakening Councils”) a third time! So the US military presence in Iraq 2003-2011 did not crush the Sunni extremists in Falluja, which they had to keep invading over and over again, as is proved by the way the extremists were back in control of the city just this past weekend. If a small contingent of US troops were in Iraq now, what would they do? Could they even tell which Iraqis in Falluja were the bad guys?

3. Sen. McCain has never comprehended that the Iraqis did not want US troops in their country. Many Iraqis who don’t even like Sunni extremists would be perfectly happy to join them in fighting US troops were they again to be on the ground in Iraq. They’re just not that into you, Lindjohn. A US troop presence in a place like Iraq is radicalizing and destabilizing, not a solution to the problems.

The two maintained that US power has declined in the Middle East in the past 5 years. But if we went back to 2007 we would find the US mired in two quagmires, in Afghanistan and Iraq, its forces over-extended and doing 3 and 4 18-month rotations. It was the bogged down US in 2007 that was weak and irrelevant. No one in the Middle East cared what W. thought.

They also wanted a direct US intervention in Syria, apparently because their Iraq adventure went so well. There is no prospect that the US could intervene effectively in Syria. Even if it could, do they want to put the Syrian rebels in power in Damascus? Do they even realize that one major rebel group in Syria is — you guessed it– the Islamic State of Iraq and Syria, the same “al-Qaeda affiliate” they want to sent troops in to fight in Falluja!