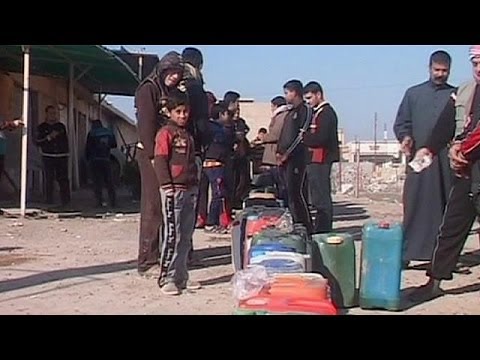 Violence in Iraq is again in the news. The biggest problem we face about what is going on in Iraq is the disinformation campaign to which we have been subjected since the 2003 invasion and occupation.

Iraq, which had its infrastructure and institutions demolished in 2003, was rebuilt on political and sectarian lines. Originally Iraq’s army had been based on a nation-wide forced conscription (in which all sects and ethnicities were represented according to their percentages in society). All that was abolished in 2003 in favor of a militia-based structure. Iraq’s current military and security forces are made of former Chalabi-led Iraq National Congress militiamen, Iran-based Badr militia, Mahdi Army militia and other sectarian based militias.

It is as though the President of the U.S. were to abolish the Armed Forces and form a new military force from recruits from extremist groups. Imagine the racial and sectarian killings that would happen here.

Thousands of Sunni families have been expelled from their homes in Diyala province by government-sanctioned militias this past year (in Miqdadiya, Baquba, other towns) with complete silence from most of the media outlets.

Additionally tens of thousands of Sunni young men have been rotting in jail for years or are being tortured and executed under provision 4 of the Terror Law. Army units like the infamous Muthana brigade march into predominantly Sunni towns and neighborhoods swearing and cursing anti-Sunni insults (using expletives against Sunni religious symbols like Aisha, the wife of the Prophet Mohammed, or Omar, the Prophet’s brother-in-law).

About two weeks ago, the Iraqi government decided to move against the peaceful protestors using military force, claiming there were “terrorists” protesting with the demonstrators.

In fact, the people of Anbar and other provinces have had enough of the sectarian repression, mass expulsion of families, mass arrests, hit squads, torture, and executions. The people of Anbar and the other provinces reacted to the attempt of the Islamic State of Iraq and Syria to take over cities like Ramadi and Fallujah by rebelling and establishing the Tribal forces.

Theses tribal forces are the same groups (Awakening councils) which fought the extremists back in 2007 and expelled them from the cities. But they don’t want the sectarian government forces either.

Supporting the Baghdad government with arms is big mistake; instead, the White House should open talks with the Tribal leaders in these provinces, with the Sunni leaders in the Parliament and pressure the Iraqi government to reform their military and security apparatus and keep the commitment to the April 2014 elections. Unfortunately the media is still playing the old movie of supporting the central government to “fight the bogeyman.”

If this failed policy continues, of blindly supporting the central government without looking beyond the headlines to see what is really going on, Iraq will boil over worse than Syria.

Peace will only come to Iraq if the institutions of power and military/security apparatus are reformed to include all segments of society, and not allowed to be monopolized by one group. Otherwise continuing this failed policy is like throwing gasoline on a burning fire; Iraq will as a result remain a bloody mess for years to come.

Mohammed Alomari, Esq. is an attorney in the greater Detroit area.

Euronews reports on the desperate situation in Fallujah