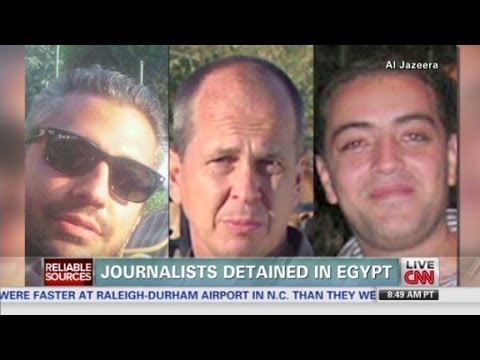 Sharif Abdel Kouddous: In a strong show of solidarity, nearly 40 correspondents and editors representing 29 international media organizations are calling for the immediate release of journalists detained in Egypt.

On December 29, Peter Greste, Mohamed Fadel Fahmy and Baher Mohamed from Al Jazeera English were arrested by Egyptian authorities and have been held arbitrarily for the last two weeks in harsh prison conditions.

According to the Committee to Protect Journalists, at least five other journalists are currently detained in Egypt (http://www.cpj.org/imprisoned/2013.php#egypt): Metin Turkan of Turkish Radio and Television Corporation, Abdullah Al-Shamy and Mohamed Badr of Al Jazeera, Mahmoud Abdel Nabi of Rassd Online News, and freelance photographer Mahmoud Abou Zeid, all of whom have been imprisoned for over five months.

The statement highlights concerns by the international press over media freedom in Egypt and the ability of journalists to do their work without fear of arrest.

The statement, below, is available online here

We, the undersigned correspondents and editors of international news organizations covering Egypt, hereby call for the immediate release of our colleagues Peter Greste, Mohamed Fadel Fahmy and Baher Mohamed, who have been arbitrarily imprisoned since December 29. We are deeply concerned to learn that our colleagues, all three of whom are well respected journalists, may face charges that include belonging to a terrorist organization and spreading false news that could endanger national security.

We also call for the release of other journalists who have been detained in Egypt, some of whom have been arbitrarily imprisoned for over five months.

The arrest of these journalists has cast a cloud over press and media freedom in Egypt. We strongly believe that upholding the rights of journalists and permitting the free flow of information is vital to bringing about greater understanding and serves the best interests of all Egyptians and the world.