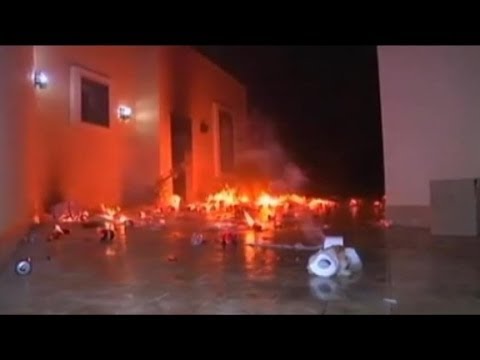 Republicans like Marco Rubio are making hay of a Senate report on the Benghazi attack on a US consulate that left 4 Americans dead, including Ambassador to Libya Chris Stevens, on Sept. 11, 2012. The report doesn’t seem to me very good. Some of its positions are contradicted by solid reporting from on the ground in Benghazi. It has been one of my disappointments in life since 2001 to discover that various organs of the US government don’t know very much about the rest of the world and aren’t very good at understanding it.

But here are some reasons that Rubio is wrong and what happened in Benghazi can’t be laid at Hillary’s doorstep.

2. Ambassador Stevens repeatedly asked that security not be increased at the Benghazi consulate. I know US diplomatic personnel posted to places like Beirut where the US embassy is a fortress and they just can’t very easily get out and mingle with Lebanese. They deeply regret the imposed isolation and feel it interferes with them doing their jobs as diplomats. But, well, security in Beirut for embassies isn’t always very good. I was in Libya in May-June 2012 and walked around without incident, and it just was not the case that the situation was Beirut-like at that time. Stevens had supported the Libyan revolution and valued his ability to move among Libyans, who loved him, and did not want to be isolated by security. The Secretary of State doesn’t micromanage these matters, an Stevens was rightly given control over this issue.

3. There was a CIA annex near the consulate, and it included former special ops guys that consular officials including Stevens saw as the “cavalry.” That group of operatives did play an important role in getting the remaining 55 consular personnel out of Benghazi but in the end could not protect Stevens. CIA safe houses are covert. The Senate report makes clear that the US military was not apprised of its existence. Very likely, Secretary Clinton was not told about it either. If she was not told the details of what security arrangements were in place, she would have had no basis for questioning them. That there was something covert about the entire US operation in Benghazi seems clear, which means that then CIA director David Petraeus was probably more involved than Hillary was, but the GOP never brings him up with regard to Benghazi.

4. The Senate report found that after the attacks “there was no cover-up.” Since the Secretary of State doesn’t actually make decisions about individual consular security arrangements, it was only after the attack that Secretary Clinton would have become intimately involved with the Libyan mission. She acted with probity in the aftermath, which is all you could ask. The senate report’s conviction that there were no demonstrations in Benghazi that day against the US based on an anti-Islam film made in the US is contradicted by eyewitnesses on the ground, including Libyans involved in them, and this talking point seems to have been some sort of concession to the Republicans on the committee by the Democrats; as often is the case, yielding to Republican weird convictions produces positions at odds with reality. If we listened to them, we’d have to give up evolution, minimum wages, separation of religion and state, and climate change, too.

5. While the Senate felt that the tragedy was “preventable,” hindsight is 20/20. There wasn’t any reason for Stevens (or Secretary Clinton) to fear that the revolutionaries whom he had aided would turn on him, and 99% did not. But a small radical group with old grievances against the US cut him no slack for his heroic role in 2011, and that could not have been foreseen. This small group was not an al-Qaeda affiliate and was not important in governing the city in 2011-2012.

AFP reported on the Senate report:

Benghazi attacks were preventable: US Senate report (via AFP)