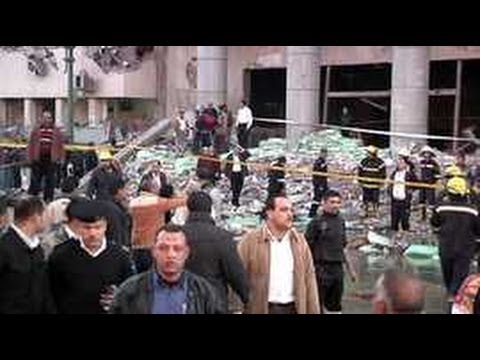 Two bombings shook the Egyptian capital, Cairo, on Friday morning. The first was apparently a car bomb detonated at 5:30 am that targeted the Directorate of Security, leaving 4 dead and 51 wounded. Car bombs have been rare in Egypt but are common in Iraq and Syria, and it is a very bad sign that they have started being deployed in Cairo.

A second bomb was set off two hours later near a metro station in Doqqi, killing 1 and wounding 15.

My twitter friends in Cairo are saying that crowds gathered after the explosions angrily blaming the Muslim Brotherhood. Likely that organization, to which deposed president Muhammad Morsi belonged, will also be blamed officially. In fact, it is far more likely that this bombing was the work of Muslim radicals much to the right of the Brotherhood.

This is the biggest act of terrorism we’ve seen in Cairo itself in some time. The Directorate of Security in the provincial Delta dept city of Mansoura was bombed in December, which led to the government declaring the Muslim Brotherhood a terrorist organization (even though no evidence was given that the Brotherhood carried out that attack).

A video report on the bombing :

Also on Friday < authorities in Port Said announced that they had broken up a plot to bomb military residences. They said that they had confiscated large amounts of expoisives, enough to level an apartment building.

Adherents of Political Islam in Egypt are disappointed by the military coup of last July 3 against the elected president of Egypt, and some may have been radicalized by these steps.