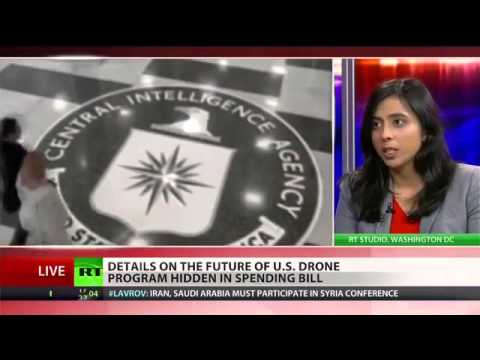 The CIA director and other intelligence chiefs were urged to increase transparency over covert drone operations by members of the House intelligence committee yesterday.

Adam Schiff, a Democratic Party congressman, called on CIA director John Brennan, to support an annual report detailing the number of alleged militants and civilians killed each year. This would enable the administration to ‘correct the record at times where there are misleading claims of civilian casualties’, he added, without providing detailed information to enemies of the US.

Brennan said this was ‘certainly a worthwhile recommendation’, but he refused to explicitly back it, insisted that the decision rested with the administration.

He added: ‘There’s a lot of debate about what is the basis for those determinations [of civilian and combatant casualties], and those numbers, so it’s something again I would defer to the administration on’.

Yesterday he emphasised his past efforts to increase transparency around the secretive campaign: ‘When I was at the White House [where he was Obama’s adviser on counter-terrorism] … I spoke repeatedly publicly about the so-called drones – remotely piloted aircraft – that had become an instrument of war and I spoke about that to the extent that I could.’

Brennan has repeatedly attacked ‘misinformation’ over civilian death tolls from drone strikes but the US administration has consistently refused to publish anything more detailed than lump-sum estimates of deaths. Where the US has published such estimates they are significantly below all independent estimates, including those assembled by the Bureau, Washington think-tank the New America Foundation, and security blog the Long War Journal.

Drones and targeted killing were a recurring theme as the heads of five US intelligence agencies faced members of the House Permanent Select Committee on Intelligence as part of a wide-ranging hearing over international threats to the US. The committee is one of two Congressional bodies charged with overseeing the activities of the intelligence community.

Schiff’s Democrat Party colleague Jan Schakowsky said that public attempts to debate the use of drones were ‘thwarted by a lack of transparency’.

She added: ‘This year both Amnesty International and Human Rights Watch have conducted serious research and raised very legitimate concerns about the consequences of the drone programme on US security yet the government has not responded.’

The hearing opened with committee chair Mike Roberts criticising Obama’s drone policy guidelines, introduced in May 2013, as an ‘utter and complete failure’. He claimed they were ‘today, right now, endangering the lives of Americans at home and our military overseas’.

The guidelines included a restriction on targeting when civilian casualties were a possibility, and an insistence that lethal action should be a last resort, taken only when capture was not possible.

A Bureau analysis of the six months following the introduction of the guidelines found that in Yemen, the number of incidents that killed civilians had actually risen.

Schakowsky asked a series of questions of Clapper and Brennan about the controversial practice of signature strikes, in which unidentified individuals are targeted by drones based on suspicious behaviour.

Clapper conceded that the US’ use of signature strikes could pose a threat to the nation if other forces developed drones of their own.

Schakowsky asked: ‘Do you believe that the signature strike model, if adopted by other countries that are developing an armed drone programme, can be a threat to the US?’

Clapper responded: ‘It could be – but I would have to comment, to the extent that is possible here, on the great care that is exercised by the US. And so I would hope in being very precise about which targets we strike, so I would hope as other countries acquire similar capabilities that they follow the model that we have for the care and precision that we exercise.’

RT on US drones from a couple of weeks ago: “CIA to stay in charge of deadly drone strikes”