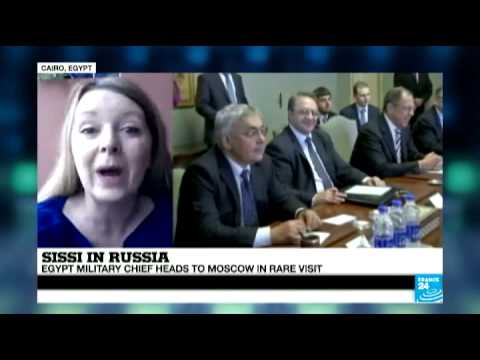 Vladimir Putin on Thursday hailed the possibility of a run for the presidency of Egypt by Gen. Abdel Fattah al-Sisi, the architect of the July 3 coup against the elected Muslim Brotherhood government. Al-Sisi flew to Moscow this week in search of such support and of arms sales. The implicit message is that he is unhappy with the criticism of his coup by American politicians and threats on Capitol Hill to delay further US arms aid (the US gives Egypt $1.3 billion a year in military aid and $200,000 a year in civilian aid; these amounts have been overshadowed in $20 billion in pledges for this year alone from Saudi Arabia, the UAE and Kuwait). Egypt is allegedly seeking $2 bn of arms from Russia, to be paid for by the United Arab Emirates, including fighter jets and helicopter gunships.

” “I know you have decided to run for president.

“This is a very responsible decision, to take upon yourself responsibility for the fate of the Egyptian people.

“I wish you luck both from myself personally and from the Russian people.”

In fact, al-Sisi has not yet announced a run for the presidency, but it is widely expected at any moment (it depends in part on permission from his fellow officers in the Supreme Council of the Armed Forces).

Al-Sisi’s bromance with Putin may be a very bad sign for Egypt’s political future, because he may want not only arms and diplomatic support from Moscow but also approval for his war on independent journalists and demonization of his political enemies. Both these tactics are reminiscent of Putin’s own.

Hopes for democratization in Russia after the fall of the Soviet Union in 1991 have foundered on a neo-authoritarianism pushed by Putin, a former KGB (Soviet intelligence) officer who sided with Boris Yeltsin and democratic reformists in the early 1990s. That decade, however, was horrible for Russia, with economic collapse, humiliation at the hands of an aggressive United States, the loss of 10 million of the Russian Federation’s 150 million to high mortality (drinking a lot of vodka causes liver failure) and low fertility (people don’t have children when they think their future is bleak). Russia also faced a concerted drive for independence in Chechnya in the Caucasus by Chechen nationalists, which was crushed by Yeltsin, and then an extremist Muslim uprising involving both Daghestan and Chechnya in the late 1990s and early zeroes, crushed by Putin.

Putinism as defined by Anne Applebaum of the London School of Economics consists of several distinct political repertoires, including:

1. Managed elections. These polls have the appearance of free political competition but in fact are constrained in ways that ensure Putin’s election and that of his party in parliament. These managed elections are more “lifelike” than the elections in pure dictatorships, where the president for life wins by 98%. The latter are just rituals of affirmation of the dictator. Managed elections provide for a lower margin of victory and a greater semblance of voter choice, without actually allowing the latter. In 2012, for instance, Putin won with about 63% of the vote and had 4 rivals (another 11 would-be candidates were disqualified). The closest rival got only 17% of the vote.

2. Managed media (helpful for the managed elections). Only small newspapers or other media are allowed to be critical of Putin. Wealthy and important media is intimidated into self-censorship through spectacular arrests (Khodorkhovsky, Pussy Riot).

4. Hydrocarbon rent-seeking (similar to Saudi Arabia), with fossil fuel companies owned by or close to the state providing a significant amount of the gross domestic product.

5. Demonization of political critics as foreign agents or terrorists and arbitrary arrests and/or sentences imposed on them.

6. Fear of citizen mass mobilization as a CIA-sponsored “color revolution;” this mobilization is combated by the steps above and by the illusion foisted on the people of supposed democratic change through the ballot box.

Putin appears to be offering al-Sisi this model, which has some appeal to a sector of the Egyptian public in the wake of the upheavals of the past 3 years.

The problem with Putinism is that it is ultimately not sustainable. It probably depends on a strong, charismatic national leader (could Putin’s successor really keep it up?) Managed elections only retain their perceived legitimacy over time if there are at least sometimes surprise victories by challengers. Otherwise, the elections come to be perceived as phony. It is also not clear that the soft dictator at the top of it can control the business classes and journalists forever. Authoritarianism seems strong to its supporters and practitioners, but it is in fact fragile and weak, and forestalls social, political and economic innovation. Putinism may have looked appealing to Russians in 2002 after the disastrous 1990s, but will it really appeal in 2020?

It is not only al-Sisi in Egypt who seems tempted by this model. Tayyip Erdogan in Turkey is adopting elements of it (although he has not so far tried to manage elections or institute a rentier economy, so his is a “lite” form of Putinism). In fact, you could argue that at the height of his power, former Italian PM Silvio Berlusconi was deploying elements of Putinism– managing the press, passing laws to protect him from corruption charges, etc.– though again, the elections were probably not fixed. Democratization theory tends to portray the process as linear and universal, but significant numbers of our contemporaries live under one or another form of Putinism.

Putinism seems to me to cry out for a fourth category in addition to Freedom House’s “Free, Partly Free and Not Free.” FH ends up classing Russia with Communist China as both “Not Free.” But there is a difference between Putin’s authoritarianism and managed elections and press and the much more robust form of authoritarianism in China. Maybe “Managed Free.”

Unfortunately the US Congress is no bar to this path. They were perfectly happy to fund Hosni Mubarak’s undisguised dictatorship. They are nakedly instrumental and just want the peace treaty with Israel to be observed.

Fortunately there are less corrupt institutions.

One problem for Egypt in adopting Putinism is that Egypt lacks the fossil fuels that allow Putin to thumb his nose at the rest of the world. At the moment, the Gulf oil monarchies are willing to inject rentier oil funds into Egypt, but such offers are notoriously mercurial.

Another problem is that the European Union is Egypt’s largest trading partner, and Europe wants the officers to go back to their barracks. Europe has a great deal of leverage over time that will allow it to at least try to combat the turn to Putinism.