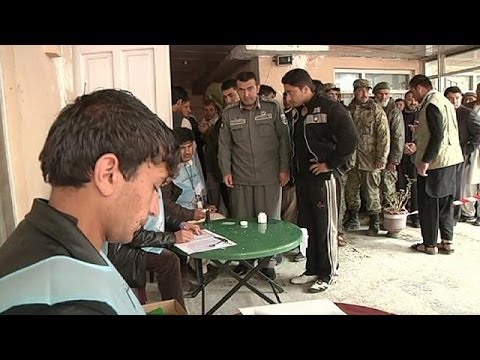 Afghanistan’s vibrant and diverse media scene is often held up as one of the few real success stories of the post-invasion years. While the Taliban notoriously banned television, strung up video cassettes from trees and only allowed one radio station, there has been an explosion in independent media since 2001.

The growing maturity and importance of the Afghan mediahas been evident over the past few months of campaigning for the 5 April presidential election. The coverage was breathless, around-the-clock and often both informative and critical. The candidates themselves were been forced to become more media savvy and open than in any previous vote. Recently, the largest private network ToloTV even hosted slick, western-style televised debates – the first ever held in the country.

But despite the many positives, there are dark clouds on the horizon for the Afghan media. Many outlets are dependent on international financing and fear what will happen if the aid money disappears. More worryingly, recent years have seen a growing pattern of government efforts to silence negative coverage. Officials have targeted critical journalists through legal harassment and attacks, and the administration has sought to tighten its control over independent media.

Since 2001, extremely lax licensing laws have meant that almost anyone with the means has been able to start an outlet. The state broadcaster Radio Television Afghanistan today competes with hundreds of radio and TV stations, print publications and online outlets, spread across the country and Afghanistan’s many languages. ToloTV is the most successful with its tens of millions of viewers, but many others, like the independent news agency Pajhwok, provide quality journalism under often very difficult conditions.

As violence has increased across Afghanistan over the past years, so have attacks against media workers. In Taliban-controlled areas, threats and beatings are facts of life for reporters, and there is little space for independent media. But it is not just insurgents targeting reporters – local officials and security forces have become more brazen in their attacks, in particular in the provinces outside the major cities.

Several emblematic cases last year highlighted the trend. In Badakshan province, policemen in April damaged the car of the owner of a local radio station after it had covered street protests against the local police. In July, a reporter with the Bokhdi news agency was allegedly badly beaten in a Kabul restaurant by a provincial governor, apparently because of an unfavourable book review. Videos of the bloodied journalist spread quickly on social media, causing widespread outrage.

The Afghan media watchdog Nai reported 56 violent incidents involving media workers in 2013, down slightly from 2012 but a significant increase from just a few years ago. According to Nai, security forces or government officials were the suspected attackers in more than half of the cases.

Equally worrying is that most of the violence has gone unpunished. Powerful individuals behind attacks are often able to pull strings to avoid prosecution in Afghanistan’s notoriously corrupt justice system. Last year, the newly-formed Afghanistan Journalists Center launched a campaign to highlight the near total impunity for attacks against media workers. Of the 23 targeted killings of journalists recorded over the past 20 years, perpetrators have only been held to account in two cases.

But Afghan authorities have also used more official channels to silence media it does not agree with. The attorney general’s office has often been called on to harass or even arrest reporters behind unfavourable coverage, in particular articles focusing on corruption. Many outlets have been reprimanded for what the current media law calls reporting “contrary to the principles of Islam”. This concept is poorly defined and open to interpretation, and often seems to be used to target critical media.

The Karzai administration has also moved to impose stricter institutional control over the media. In 2012, the government attempted to push through a new, widely criticised Mass Media Law. The law would have granted the Ministry of Information and Culture broad powers to set laws governing the media, as well as criminalise a long list of vaguely defined “media violations”. Tabled after almost no consultation with media professionals or civil society, the law caused an outcry and has yet to be enacted. Repeated calls by media rights groups for a freedom of information bill have also fallen on deaf ears.

The less tangible threat to media freedom is the self-censorship that many reporters feel is necessary to protect themselves. The risks of publishing a critical story often outweigh the rewards, in particular on issues around corruption or human rights abuses.

An example from this year’s election campaign is the lack of discussion about transitional justice. Addressing past war crimes is still very much taboo in Afghanistan, not least because so many individuals who face serious accusations of human rights violations still occupy influential government positions. Several of the candidates in this year’s elections are warlords or commanders with bloodstained pasts. Yet their backgrounds have hardly been raised by Afghan journalists, even as international outlets have covered the topic.

Last year, the Uzbek warlord and vice presidential candidate General Rashid Dostum offered an unprecedented apology “to all who have suffered on both sides of the wars” – an apparent precondition for him joining the ticket of Ashraf Ghani, one of the race’s frontrunners. This raised hopes that the door had opened for national media to ask more questions on the topic, but it does not seem to have happened – at least not yet. As the Afghanistan Analysts Network has pointed out, “soft” media coverage of the candidates’ pasts could well be part of a longer-term strategy: build up a relationship first, ask the tough questions later.

Whether or not Afghan media outlets manage to maintain their independence in the face of violence and censorship, many still face uncertain financial futures. The international aid money that much of the media is dependent on is already starting to dry up and will decrease even further after 2014.

Some networks, such as ToloTV, have managed to achieve a degree of financial independence, but there is a real risk that many others will not survive. Arguably, the Afghan media scene is already saturated and having fewer outlets is probably inevitable – the local Kabul government for example has reportedly run out of radio licenses due to a lack of available frequencies in the capital.

But as a recent BBC Media Action report noted, the outlets best placed to survive are those with wealthy, individual backers. Several of these are linked to local strongmen or politicians, and are often disparagingly referred to as “Warlord TV”. It would be a serious threat to press freedom if these outlets come to dominate at the expense of quality media like Pajhwok, which might struggle for funds and be forced to downsize.

Independent media that can challenge authority and inform the public will be crucial for Afghanistan’s fragile democracy after 2014. The past few months have shown Afghanistan’s increasingly mature media scene at its best – hopefully not for the last time.

Olof Blomqvist is a freelance writer focusing on South Asia. He spent last year in Afghanistan working on media projects in the humanitarian aid sector.