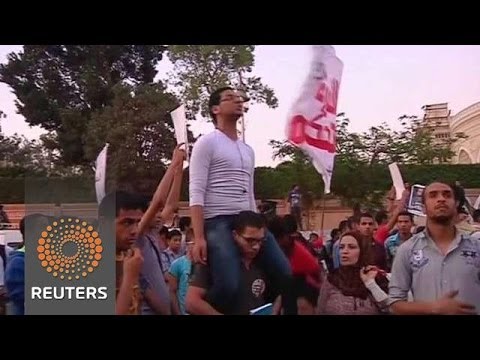 Hundreds of leftist and secular youth demonstrated on Saturday against Egypt’s Draconian law forbidding demonstrations, demanding the release of revolutionary activists jailed under it. They marched from Serai al-Qubba to the presidential palace. Activists said that they did not believe the presidential elections scheduled for late May would be on the up and up if the protest law remains in place.

The law, passed last fall by the military-appointed interim government, requires that those who plan to protest submit a request three days before to the Interior Ministry and receive approval. The law seems to me to be unconstitutional by the constitution enacted by national referendum in January, which guarantees the right of peaceable assembly. But it has not yet been struck down by a court.

Egypt has witnessed thousands of demonstrations since January 2011, when street protests began pulling down the regime of then president for life Hosni Mubarak. Another big wave of protests in July, 2011, provoked the military government finally to try Mubarak and police who fired on demonstrators the previous January. In June-July of 2013, millions of protesters brought down the government of Muslim Brotherhood leader Muhammad Morsi, after only a year in office, a provoked a military coup and harsh crackdown on the Brotherhood. (Over 1,000 Muslim Brothers have been killed and 16,000 or more have been imprisoned).

Gen. Abdel Fattah al-Sisi, who recently resigned his commission and announced his candidacy for civilian president, cynically used the youth protesters to make his coup and then sought to demobilize them in preparation for becoming an autocrat. The presidential election is to be held in about a month, and al-Sisi wanted to ensure that neither his nemesis, the Muslim Brotherhood, nor his erstwhile allies, the liberal or leftist youth, could disrupt the electoral campaign through big demonstrations.

Last fall three prominent members of the April 6 Youth Movement were arrested for protesting without a permit, including Ahmad Maher, one of the more prominent leaders of the 2011 revolution. They have been sentenced to three years hard labor and have alleged that they are routinely beaten in prison. Blogger and activist Alaa Abdel Fattah was also beaten and arrested, and faces further prosecution. Youth activists consider it shameful that these revolutionary icons should be treated this way by the al-Sisi-appointed government, given that it came to power on the backs of the youth activists.

On the other hand, many Egyptians have revolution fatigue and complain about the economic disruption caused the the youth protest culture. Al-Sisi depends on this silent majority for support in his counter-revolution.

Hamdeen Sabahi, al-Sisi’s only rival in the presidential election, pledged to abrogate the law constraining demonstrations if he wins. He also vowed to release those jailed for violating this law from imprisonment. He said that prisons are for criminals, not for social critics. He also criticized the current interim government for its attempt to repress demonstrations on university campuses, which has roiled student life. He said that not all university students are Muslim Brothers and very few are violent. Sabahi is clearly angling for the youth vote, which can be substantial in Egypt if they are mobilized. The youth is disillusioned with al-Sisi, and declined to participate for the most part in the referendum on the new constitution last January.

The police do not appear to have made arrests on Saturday, and it could be that al-Sisi gave orders that there not be a violent crackdown, lest that create images that would prove unfortunate for his presidential campaign and give Sabahi’s criticisms weight.

For background on these events, see my new book, out July 1: The New Arabs: How the Millennial Generation is Changing the Middle East . A review is here at Publisher’s Weekly

Reuters: “Opponents march against of law restricting right to protest in Egypt”