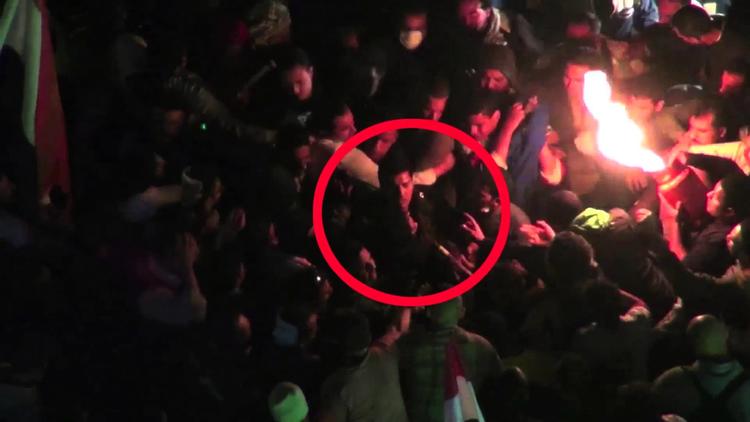 When a new website entitled Love Matters – on sexual health and education – launched its’ Arabic version a few months ago, I thought of my high school years and the amount of sexual data girls were allowed to know. How much did their parents tell them? What did they learn outside the biology book? What shouldn’t they know in order to be decent enough to date from the point of view of boys?

The question of sharing things on social media entails having a virtual personal space where one can share what one believes to be expressive of her ideas and beliefs. After this argument with my mother, I started viewing the concept of virtual space as an extension of the problematic of space in relation to gender in my society.

We are moving around in circles, from one circle to another. Full moons next to each other, entangled in a mess of womanhood: this is the space we are given.

In a society where as girls we come to understand that to be beautiful is to look like a full moon: the moon of the 14th; to have a round shaped face, and of course to be ‘white’: beauty becomes standardized in this circular shape. It is the shape that controls our lives.

The first circle limits the subject’s behavior according to her gender. They are given all the attributes of a specified gender: as girls, they need to like the colours pink and red; they should play tea party and dress the doll. This is the time when we learn to know our limits; that crossing these limits is the worst thing you can do. As a girl, your whole life is gendered so that in a house there is limited space for you to be anything else.

With the passage of years there is another circle being formed right beside this one yet inside it still, like an algebra problem with two circles overlapping leaving a shaded area in the middle. This shaded area is what we should carry around from one stage of life to another: we should please, we should not cross the borders given to us, and we should not ask questions. With each stage, girls and young women are offered information that is limited to what the society believes they need at that time. So it is only when one crosses over to the circle of privilege – marriage – that one needs to know specific biological information in order to be able to perform well in this new space given to her.

I said privilege because in our culture to not get married is to have thrown away your life; you’ve been stigmatized with failure. And so getting married becomes a struggle for your own space because the privilege is not only of knowledge, but of finally having control of the space you move in. This control is however limited again to social, economic and biological demands so that is more of an illusion of personal space. “Most women – at least of my generation – got married to leave the house. Or to get children, but basically it was to leave their parent’s houses,” my best friend’s mother explains to me. Has this changed now, this struggle for space?

Despite the slowly rising number of young women who are living independently without their families or spouses, it is still considered a social taboo to take such an action. The need for individual space is automatically taken for looseness and for indecency. Therefore personal space takes on different shapes like one’s personal space on Facebook. My argument with my mother over material I shared is not a personal issue. Most of my friends either do not communicate with their families on social media, or limit their access to their profiles, or monitor what they are posting so as not to offend anyone.

At the moments when personal space is nonexistent – because there are no private or public spaces that could be called one’s own – “personal space” is confined to the body. It becomes the body. Your body is your space.

Yet, according to my mother’s argument, if a girl never gets married (obviously alluding to her never engaging in sexual acts) she need not know the subject matter offered on Love Matters. I can conclude that this means that she is not allowed to know things about her own body because she does not have a certain social status.

When one’s body is no longer “one’s own”, then what is? If the body, the flesh, is not regarded as personal property, of whose health and condition I should be aware of, then it becomes an object.

Virginia Woolf’s declaration that “a woman must have money and a room of her own if she is to write fiction,” assumes that the woman is a subject. When placed in a space of her own, she is capable of action. What then does the object do in any given space? What do we do in the circles we are given?

Circles go round and round.

Almost two years ago, the question “What made her go there?” was hovering around a certain girl beaten by army soldiers.  This question has now become a joke but then it wasn’t. She had moved out of the assigned space she was given and therefore deserved what she got.

In a little less than a year mob attacks are on the rise. Inside a red circle added on a video there is a woman trapped, being harassed and sexually assaulted by tens of men. There is no room for her to run, to escape. I watch and I wonder which one of them was in there? There are only a few women who have come out openly about the mob assaults that have happened to them in public spaces. I remember Yasmine El Baramawy’s face as she tells the TV presenter calmly, that whenever she sees Mohammed Mahmoud St. on television her hand automatically holds her pants. The invasion of her space and her body haunts her even when she has escaped the public space.

Two weeks ago a young woman was mob attacked on Cairo University campus. Socially and culturally constructed circles seem to be tightening in times when individuals are trying their hardest to crack them open. At the time when initiatives and movements are working very hard to fight harassment in Egypt, the few safety spaces where women could walk are becoming hazard zones. While not being able to ask why she goes to university, the question was altered to why is she going to university dressed like that? This made the question rise again, in its’ same structure “What made her go there?” in an image shared on FB pointing to Egypt as ‘there’, cynically tightening the circle even more.

A few months ago, I passed by a television turned on to a morning talk show. The presenter was speaking to a psychiatrist and asking her to explain how these young women protestors supporting the Muslim Brotherhood have come to lose all characteristics of femininity and womanhood?  Are they then un-gendered? Are they perhaps men? Does leaving the algebra circles strip a woman of her gender and sex leaving her sexless?

All these examples of women acting in public space as subjects rather than objects and the reactions of the masses shows that the objectification that is practiced inside the assigned circles continues outside them. It becomes more aggressive and violent and targeted at ending this act of breaking the cycle. At most times, it is women, mothers, friends, and peers, who project this objectification on to others.

In a feminist context the cycle of the moon is celebrated as the cycle of life, of menstruation, of re-birth. Its’ ebb and tide are the changes within us as women, as human beings; the changes that bring us forth to mature and finally become who we are meant to be. If girls, young women and older women are always moving by the rules of the algebra equations that rule their lives, will they ever find the space outside the limited circles to really know who they are and what they want?

Where then does one become herself? When can she be herself if breaking the space is such a struggle?

I always thought that art brought about this tiny opening through which one can push oneself through. However, a month ago I was performing in a physical storytelling performance  where I had written two creative texts. One of them felt like a burden to tell. In the story, the woman reminds her lover of a day where she doesn’t go to a protest because she chooses to stay with him and sleep with him instead. For weeks I was worried about the effect of performing such a text. I kept thinking of my mother’s disappointment. The fight over sharing Love Matters upset me even more as it heightened my discomfort. My cast mates and friends then brought my attention to the fact that no one would hear anything I say past that sentence, and that what was around that line was what mattered.

This version was not the one I performed. I was so scared to think that I had given in to outside pressures, but now I feel I made my decision according to how to edit the text in the best manner possible.

I think of Woolf’s statement: room to create. I still believe that the struggle, the fight to break the circle is what will eventually break it. Through art, protest, motherhood, and all the brilliant things women do every single day. I don’t know the exact way this is done, but Yasmine El Baramawy is still making music and performing and this is the biggest break from it all.

Zainab Magdy was born in Giza, Egypt, and is doing an MA in Performance Theory at Cairo University where she is a teaching assistant. She has been part of writing and storytelling workshops with a gender sensitive perspective since 2009. She has been acting in theatre since 2007 and has recently taken on playwriting and is now part of a new writing and performance project: “The Odd Ducks”.

Dignity without Borders: “Why do you think women get harassed in the streets of Egypt?”