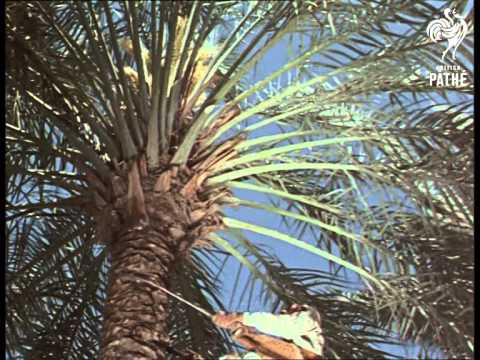 “Reel 1. Directed by Graham Wallace. Cameraman – Reg Cavender. Editor – Jocelyn Jackson. Sound – W.S. Bland and George Newberry. L/S of aeroplane flying over countryside. Various aerial shots of Iraq and its rivers. C/U of a shepherd looking up at the sky. Aerial shot of ruins. L/S of train travelling along – palm trees in foreground. Aerial shot of Mosque of Khardimain. Views from the train and shot of passengers disembarking in Baghdad – they are presumably tourists as we see travelling bags with lots of destination stickers on them. C/U of sign at the railway station – Baghdad West. L/S from high angle of the city. Various shots of Baghdad. Narrator speaks of the city’s history and of Arabian Nights. L/S of water buffalo walking into a lake with children gathered around in the foreground. Schoolgirls play volleyball in their school uniforms. L/S and C/U of one of the players. M/S of classmates applauding. L/S of an outdoor swimming pool. “The twentieth century has come to Baghdad” states the narrator. L/S of city street. Pan down to show men at an outdoor cafe. Two of the men play backgammon. Bazaar. C/Us of a man beating metal. M/S of two white tourists (the woman holds a small fan) looking at Persian rugs to buy. The husband talks to the salesman, the woman purses her lips! High angle of a row of Iraqi policemen. An officer inspects uniforms and the men march off. High angle shot of passengers getting on to a bus. C/U of a policeman directing traffic. High angle shot of busy streets. Race track – horses walk in front of the camera. C/U of spectator in traditional dress. Shots of the race. C/U of spectator seen before following the race with binoculars. Narrator mentions the fact that all thoroughbreds are descended from Arabian stock. C/U of group of men and young boy celebrating the end of the race. C/U of an elderly man wearing traditional headscarf steering a small boat. C/U of the sail. View of palm trees. Fishing boats. Men climb up palm trees to collect coconuts. L/S of mules being used to help irrigation processes. L/S of man at work on irrigation drain – sunflowers in foreground. C/U of crop. High angle shot of mountain village. M/S of family with their herd of sheep. Mother plays a kind of flute. Scenic shots of the landscape. Two Kurdish men walk across a small waterfall. They stand in bushes with their rifles. L/S of Kurdish village. L/S women collecting water. Narrator makes biblical references to Jacob and Rebecca.

Reel 1 continued. M/S of two women dressed in bright red traditional clothes doing their washing in small metal tubs. C/U of a woman carrying a small water urn over her shoulder walking up some steps. The men work in the fields – various shots of men performing agricultural work. C/U of watering channels. Man stands on a hillside and chants a prayer. L/S of shepherds with flocks. Peasants walk through meadows. High angle shot of a village. C/U of a Kurdish woman spinning fibres on a small wooden hand spindle. M/S to show that she is seated outside. Two other women roll something on flat stones – bread? M/S of their husbands sipping tea at an outside cafe. Shots of a group of children – girls – seated on the ground playing a game of catch. C/U of one of the girls throwing something small into the air and catching it whilst she sings or chants something. L/S of large number of people milling around. Then shots of men with linked arms dancing to traditional music in an outdoor setting – a Yezidi dance. Young girls sit on a wall and clap. L/S of a man carrying long branches – a large boat is approaching on the river behind him – River Shatt al Arab. L/S of harbour. The port of Basrah. A boat is punted up the river. Sinbad the Sailor is mentioned. Various shots of activity at the port. Cargoes being loaded and unloaded. The airport, various shots of planes, passengers disembarking etc. shot of the reflection of a boat in swampy water. Shots of Marsh Arabs cutting reeds. three men repair fishing nets, men pull nets through the water. Small boats are punted along the marshes. Boat approaches a village settlement. Teenager feeds a small bird.”