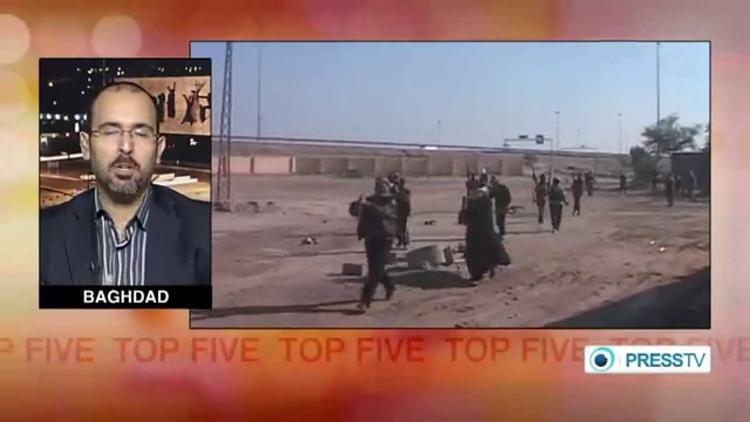 For the first time, Iraqi helicopter gunships have crossed the border to hit a target inside Syria. They destroyed 8 fuel tankers transporting gasoline to forces of the Islamic State of Iraq and Syria, an al-Qaeda affiliate that has begun holding territory both in northern Syria and in al-Anbar Province in Iraq. Brig. Gen. Saad Maan, spokesman for the Interior Ministry, said, “Army helicopters yesterday morning struck eight fuel trucks in Wadi al-Sawab at Al-Bu Kamal inside Syria, which were attempting to enter into Iraq.” He added that “eight persons were killed in this operation, i.e. the persons who were trying to transport the fuel” to the organization “the Islamic State of Iraq and Syria” in al-Anbar Province. The village of Wadi al-Sawab is near the town of Al-Bu Kamal in Syria; the latter shares a border checkpoint with the Iraqi city of al-Qa’im. Al-Bu Kamal is controlled by rebel forces in Syria.

Iraq Prime Minister Nouri al-Maliki had been hostile to the Baathist regime of Syrian president Bashar al-Assad, blaming the latter for bombings in Baghdad in the second half of the last decade. The Syrian Baath Party is a branch of the same Baath Party that had ruled Iraq 1968-2003, which in Iraq came to be headed by Saddam Hussein. Al-Maliki is a longtime leader of the Islamic Mission Party (Hizb al-Da`wa al-Islamiya), which was dedicated to overthrowing the Baath.

But by summer of 2012, al-Maliki had begun supporting al-Assad, since the best fighters on the side of the Syrian rebels were increasingly radical Sunni Muslim groups. Al-Maliki also has a feud with Saudi Arabia and its hard line anti-Shiite Wahhabi branch of Islam, which supports the Syrian rebels. Al-Maliki, despite being a religious Shiite, was not initially close to the Islamic Republic of Iran, in the past two years he has gravitated toward Tehran and its client, Damascus. This trajectory of al-Maliki, from anti-Bashar to pro-Bashar, and from lukewarm toward Tehran to pro-Iran, shows that geopolitics is not being dictated by religious identity. Al-Maliki didn’t make his alliances on the basis of Shiite Islam. He didn’t consider Bashar al-Assad a Shiite Muslim, in any case, but a secular Arab nationalist hostile to religion, who happened to be from an unorthodox branch of Shiism. And al-Maliki, despite being a Shiite, did not like the Khomeini theory that ayatollahs should rule, favoring instead “the democratic game” and rule by elected parliamentarians.

This winter, the al-Qaeda affiliates took control of the cities of Ramadi and Falluja in al-Anbar Province, a spill-over onto Iraq of the Syrian civil war, where radical Sunni fighters, some of them from Iraq, had taken territory in northern Syria.

Since the al-Qaeda affiliates in Iraq are trying to benefit from their control of oil fields and other resources in Syria for their struggle against al-Maliki, it is natural that the latter would eventually hit them in Syria itself. But this is a dangerous and epochal step. Not since WW II, when Iraq helped the British fight the Vichy French in Syria, has there been this degree of Iraqi military intervention in Syria. It could be a sign that the Syrian Civil War, which has already seen intervention from Lebanon, is becoming a regional conflagration.