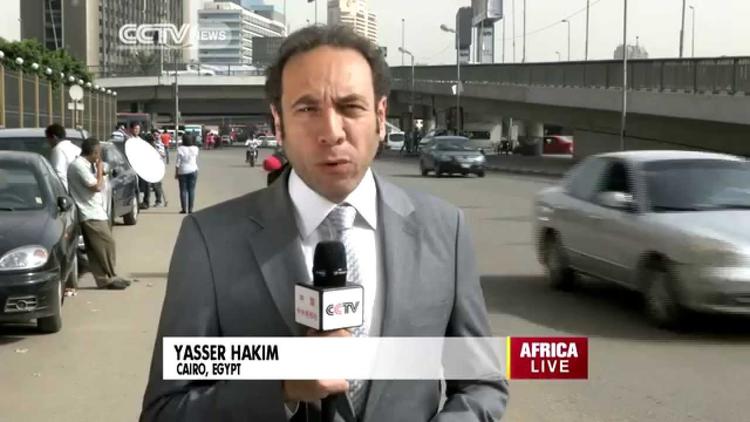 Voting was abruptly extended from two days to three in Egypt’s presidential election on Tuesday, apparently because of an unexpectedly low turnout. The contest pits Abdel Fattah al-Sisi, until recently minister of defense and a high-ranking general, against leftist warhorse Hamdeen Sabahi. None of the other eligible Egyptian frontrunners agreed to run, since they concluded that the fix is in for al-Sisi.

At the end of voting on Tuesday, the High Electoral Commission declared that turnout was 37%, but outside observers suggested it was as low as 25% in reality. On Tuesday, government workers were suddenly given the day off so as to ensure that they could vote, which may have gotten the numbers up a bit.

Al-Sisi’s camp is likely concerned that their candidate should do better than Muhammad Morsi, the elected president he overthrew on July 3 last year. Morsi recieved 13 million votes and the turnout was about 50 percent. For the electorate to be substantially less enthusiastic about al-Sisi now than it was about Morsi then is a huge embarrassment (Morsi had high negatives because the Muslim Brotherhood is viewed as cult-like by many Egyptians).

Disturbingly, there have been some attacks on Hamdeen Sabahi supporters at polling stations. Sabahi filed a suit against the extension of voting by a day, and late Tuesday withdrew his campaign’s observers from the polling stations on the grounds that they were in danger. Rumors swirled that Sabahi might withdraw from the race, but he denied them.

The voters are not uninterested in politics. Some of the low turnout comes from a rule that was implemented that they had to register to vote in their places of origin. For many Egyptians who have come to Cairo or Alexandria in search of work, that is a long and expensive train ride. One has to be suspicious of a rule that rewards long-term urban populations and discriminates against rural labor migrants. The latter are much more likely than the former to support either the banned Muslim Brotherhood or the socialist candidate, Sabahi.

About ten percent of the Egyptian electorate was disenfranchised, some 5 million voters, when the military junta banned the Muslim Brotherhood and disbanded its civil party, the Freedom and Justice Party (many of whose top leaders are in jail and some of whom have been sentenced to death). That 5 percent was specially enthusiastic about going to the polls in 2011-2012, so it is probably more like 20% of likely voters.

The “government” appointed by the junta outlawed protests unless organizers obtained prior secret police approval, and arrested several prominent leaders of the youth movements that overthrew both Hosni Mubarak and Muhammad Morsi. Ahmad Maher, a leader of the April 6 Youth, has been sentenced to 3 years hard labor. The April 6 youth group was then banned by the coup government. Mahinur al-Misri < a href="http://thecairopost.com/news/111647/news/eu-concerns-over-ecesr-raid-and-masrys-imprisonment"> Mahinoor al-Masri was just sentenced to 2 years and hit with a big fine, also for protesting.

So the engaged youth is damned if they are going to come out and vote under these circumstances.

If you take away the Brotherhood and the urban youth movements, you take away a lot of the people who voted in the first round of the presidential election held exactly two years ago. I was in Cairo then, and was struck by the political openness, pluralism and enthusiasm of the public. Everyone you talked to supported a different one of the 13 candidates. They were partisan but tolerant. One leftist told me then that if the Brotherhood won it wasn’t a complete disaster, since there would be other elections.

During my visit to Egypt in March, 2014, I found a completely different atmosphere. People had clammed up and were clearly afraid to talk politics. I started chatting about the presidential race with a waiter, and his colleague came running over and shut him up. “Leave that,” he said, “to the Egyptians!” Rumors of Interior Ministry, i.e. secret police, surveillance were rife. The newspapers were self-censoring and bland. Only al-Shuruq dared interview people in the circle of the Muslim Brotherhood and write stories about their reaction to the government’s measures. But even it ran a piece by a Syrian Baathist about how enlightened dictatorship is a good thing. NGOs were closing up, afraid of government crackdowns on them. They were right to be afraid.

At the same time, public sector unions were striking for a pay raise. When I was there, the postal workers were paralyzing the economy. The tourists stopped coming after the coup. Al-Sisi blamed their absence on the youth demonstrations. But it was his bloody crackdown on the Brotherhood and polarization of the country that scared off the foreigners. The numbers of tourists dropped this spring 2014 from what they had been under the Muslim Brotherhood the year before.

I caught revolutionary singer Muhammad Muhsin performing at the Culture Wheel in Zamalek, and there I found masses of young people full of enthusiasm. Muhsin is disliked by the coup government and was excluded this spring from performing at the Opera House.

So the absence of the youth at the polling booths comes as no surprise to me. And obviously those who think well of political Islam are also absent, with the exception perhaps of the Salafis, hard line fundamentalists who have hitched their wagon (likely on the orders of their patron, Saudi Arabia, to al-Sisi).

It is said that the voters are disproportionately middle aged and older women who are swooning for al-Sisi.

The Carter Center has expressed the gravest reservations about the legitimacy of this election. Given the ban on protests, the interference with campaign workers, the ban on so much as interviewing Brotherhood members, and generally arbitrary and Draconian restrictions, the election does not meet international standards.

So al-Sisi will likely get the presidency he coveted. But it won’t really be worth all that much, since a minority of Egypt’s 53 million eligible voters will have given him their vote. The revolutionary youth hasn’t stood with him. He is the military ogre who ordered virginity tests against protesting young women in 2011, implying that they had come in public just to find boyfriends and tents in which to make love, rather than to overthrow a dictator. In a way, al-Sisi’s coup has been a long series of similar cavity searches for the Egyptian public as a whole. And here’s the conclusion: they aren’t virgins and they aren’t naive or gullible.