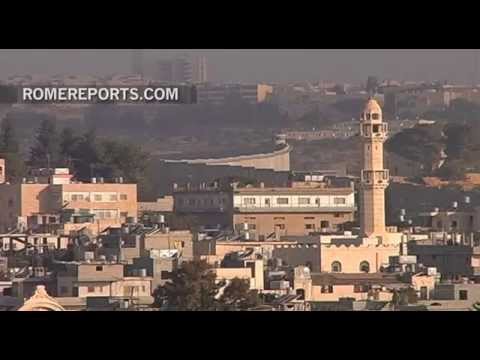 "This visit will help us in supporting our struggle to end the longest occupation in history."

On an upcoming trip to the Middle East, Pope Francis is expected to prioritize his visit with Palestinians, including a refugee camp, in a move interpreted by many as a 'recognition' of a future Palestinian state.

The papal "pilgrimage of prayer" is set to begin in Jordan next Saturday. From there, Francis is expected to take a helicopter directly to Bethlehem before heading to east Jerusalem, both recognized by the international community as part of Palestine.

According to Father Jamal Khader of the Latin patriarchate in Jerusalem, the decision to visit Palestine before Israel is "a kind of sign of recognizing Palestine."

While in Bethlehem, the Pope will meet with the leader of the Palestinian Authority, Mahmud Abbas, and then celebrate mass in front of the Church of the Nativity, before visiting a nearby refugee camp, AFP reports.

"He will have a lunch with Palestinians, with families suffering from the occupation… then he will visit Dheishe refugee camp to witness the suffering of Palestinian refugees," Ziyyad Bandak, Abbas's adviser for Christian affairs, told Voice of Palestine radio. "This visit will help us in supporting our struggle to end the longest occupation in history."

According to Shoruq, an independent Palestinian refugee rights NGO, the Dheishe refugee camp in the occupied West Bank was established as a temporary sanctuary during the expulsion of the more than 750,000 Palestinians during the 1948 Nakba (Catastrophe). Now home to the descedants of those expelled, the 13,017 refugees live on less than one square kilometer of land rented by the United Nations Relief and Work Agency for Palestine Refugees (UNRWA).

"Knowing who he is, and his sensitivity for all those who suffer, I am sure that he will say something defending all those who are suffering, including the Palestinians who live under occupation," Khader added.

While in east Jerusalem, the Pope is planning to take "brief forays" into Israel and will meet with Israeli Prime Minister Benjamin Netanyahu at the Vatican-owned Notre Dame complex, which stands on the disputed border of east and west Jerusalem.

"I know that Israeli officials are not happy with this decision," to begin his visit in Palestine and not Israel, Bandak added. "We welcome this visit and consider it as support for the Palestinian people, and confirmation from the Vatican of the need to end the occupation."