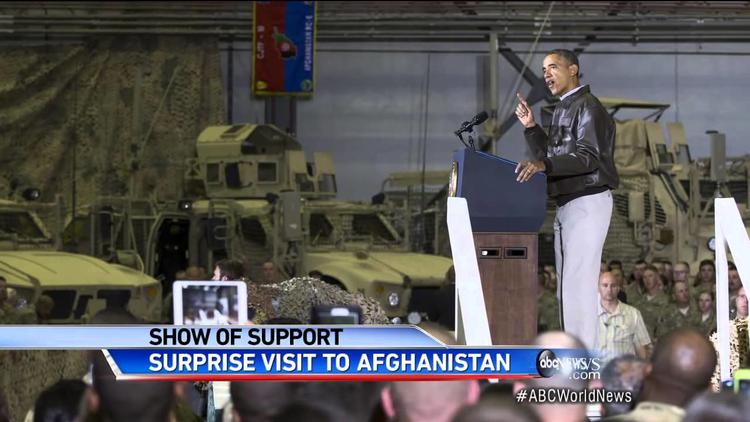 Update: President Obama on Tuesday morning announced the end of the Afghanistan War on December 31, 2016. He envisions about 10,000 US troops there through 2015, then 5,000 in 2016, then virtually none except to guard the Kabul embassy in 2017. He says that this plan, however, is dependent on the Afghan president signing the Bilateral Security Agreement, which would afford legal protections to US troops using force in another country. Apparently he made a last attempt to see Afghanistan president Karzai to nail down the security arrangements, but the latter declined to cooperate.

President Obama made a surprise trip to Afghanistan on Monday, for Memorial Day. But while the main impetus for his trip was to honor US troops for their service there, he appears to have also tried to arrange a meeting with Afghanistan President Hamid Karzai. He issued an invitation for Karzai to join him at Bagram Air Base, but Karzai declined. I haven’t been able to find any sources I trust that confirm that Karzai was offended by being summoned to Bagram.

Obama wanted to meet with Karzai because the latter refuses to sign the Bilateral Security Agreement, which would lend a legal framework to the presence of a small contingent of US troops after Dec. 31. Without the BSA, US troops engaged in fighting with the Taliban could be charged with war crimes, since the UN Security Council will cease issuing permissions for international use of force in Afghanistan.

Presidential candidate and Karzai’s likely successor, Abdallah Abdallah, has said that he will sign the BSA the minute he is sworn in.

Tolo news in Afghanistan in Dari Persian noted: “Prior to this, the US foreign secretary and the security national advisor of Obama had come to Afghanistan and held talks about the security pact. However, the talks did not apparently have the desirable results.” (h/t BBC Monitoring)

Obama and the Pentagon want the BSA signed sooner rather than later because they have to ship hundreds of thousands of pieces of equipment back out of the country, along with all the remaining US soldiers, by Dec. 31 if there will be no BSA. In the absence of confirmation, they must plan to bring it all out and everyone out. The logistics would be much easier if they knew that, e.g., there will be 5,000 US troops in the country on Jan. 1.

But if Monday’s invitation was an Obama attempt to strong-arm Karzai, it seems to have gone badly awry.

Those Afghan politicians who want a continued US troop presence, albeit a small one, are concerned to retain US strategic investments in the country and foreign aid. Member of Parliament (MP) MP Shokria Barakzai said to Tolo News, “All the foreign assistance is like a switch. If it is turned off, we will go to darkness. So, we should not forget from where we have started and which country can donate five billion dollars in assistance [to Afghanistan] every year? No country is ready to do it.”

The Afghanistan national army cannot be paid for out of the current Afghanistan budget, and therefore the country needs outside monies just to keep its military paid and fed. Were the military to fall apart, the Taliban could well take over again.

Whether there are US troops in Afghanistan matters. They could easily be ambushed and the US could be dragged back into a hot war there.

The trip was in part about the politics of the treatment of veterans back in the US, with the Obama administration under fire for deficiencies in the Veterans Administration hospital system (deficiencies that have been there since before Obama but which have been exacerbated by the Bush wars and all the wounded vets they produced).

But it was also about US foreign policy and the unsatisfactory relationship Karzai has with the US.

Afghanistan’s future and the future US involvement there deserve a national debate that they are not getting in the US. It is as though Americans are finally taking W.’s advice not to pay any mind to his wars and just go shopping very seriously.

There is likely to be renewed Indo-Pak competition for Afghanistan, now that the Hindu nationalist BJP is ensconced. Does the US want to be in the middle of that?