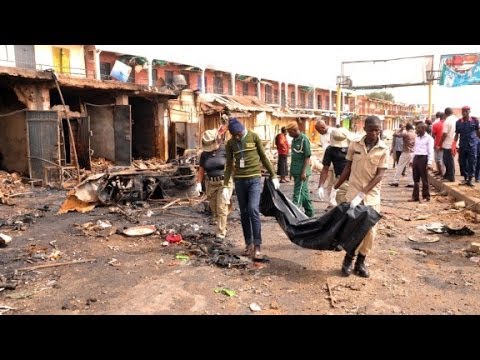 On the night of April 14-15 2014, militants from the group known as Boko Haram broke into the dormitory of a secondary school in the town of Chibok, in Borno state in northeastern Nigeria, and abducted some 300 girls who were scheduled to take exams the following morning. Some of the girls were Muslim, some were Christian, and most were from families with their roots within the region.

Three weeks later, most of them remain captives and the Nigerian government’s response to the crisis has proven stunningly ineffective. This situation has drawn a world-wide response with the US, Britain, Israel and France sending counterterrorism experts to help out, especially through contributing technical expertise. Yet technology such as drone surveillance systems will be of limited help.

Commentary in the western media focuses on whether Boko Haram has ties to Islamist movements such as al-Qa’ida in the Islamic Maghrib. They pay little attention to how the movement can be understood in the context of the region’s history, and give little consideration to other Islamic movements in Nigeria and whether they can find a basis for common ground with Nigerian Christians, and for standing up for women’s rights.

The key figure in the history of Islam in northern Nigeria is Usman Dan Fodio, who led a jihad to establish an Islamic state in what would become northern Nigeria in the early 1800s. Having conquered the territory, he faced the challenge of bringing Islam down to the grass roots of this society.

One remarkable illustration of his strategy can be seen in the work of his daughter Nana Asma`u, an Islamic scholar in her own right who worked to spread Islamic values among women. In this setting, as men had taken up Islamic practices, women maintained traditional ones, notably the bori spirit healing cult. For Nana Asma`u. it was important for women to become literate, to gain their own understanding of Islam, and to find practical, effective solutions to problems such as illness or food shortages brought on by drought, rather than believing they could be solved through magic.

By the late 1800s Dan Fodio’s successors were becoming ineffective, and Europeans were on the advance over the wider region. Both factors help to explain hope for the appearance of the Mahdi, a figure with miraculous powers. Word was spread that the Mahdii would come from the east. One of Dan Fodio’s descendants, Hayatu Bin Sa`id, was drawn to this idea. He had lost out in political competition at the center of the Caliphate. He moved east to Adamawa, an area covering part of northeast Nigeria, and the far north of Cameroon. It was an area where many people still followed traditional religion. Hopes were inspired by news that a Muslim leader in the Sudan, Muhammad Ahmad, had declared that he was the Mahdi. This project found some enthusiasts, but was rejected by Caliphate leaders. Hayatu died in 1898, on the eve the British conquest.

Hayatu’s story is relevant to the geography of recent upheavals, which are focused in the northeast of Nigeria, and in the neighboring area of northern Cameroon. The first sectarian upheaval in post-independence northern Nigeria came with the Mai Tatsine disturbances in the city of Kano in December of 1980. The leader, Muhammad Marwa, was originally from northern Cameroon. He had grown up in a family following traditional religion, then converted to Islam, and came to see himself as having prophetic powers. He was renowned for his condemnation of modern technology. He was killed, and his followers driven out of Kano. They brought about another disturbance in Maiduguri, capital of Borno state, in 1982. This is where the next major sect, Boko Haram, would emerge in the 1990s. There is no clear evidence that Boko Haram grew out of the `Yan Tatsine, but the social and political chemistries are similar, a product of the history of northeastern Nigeria. While Boko Haram has made some connections with wider Islamist movements, it is best understood as a cult with roots in a local Mahdist tradition.

It is striking that on the morning before the abduction of the girls in Chibok a heavy storm hit the sprawling city of Lagos in the south and tore off the roof of Santa Monica Catholic Church as some 500 children had assembled for morning mass. Heavy rain poured in raising the threat that children might drown. But members of the church were able to mobilize to save all the children. Shortly after the girls’ abduction, the Islamic Movement in Nigeria held an event in Kano celebrating the birth of the Prophet Muhammad’s daughter Fatima al-Zahra. A leader of the movement condemned the girls’ abduction, and he was supported by a Christian pastor.

The environmental challenge raised by the storm in Lagos is echoed by the drought that has plagued northern Nigeria, seen most graphically in the shrinking of Lake Chad, which borders Borno state. It has shrunk by some 90% over the last three decades, a result of lower rainfall and the diversion of water for agriculture. Nana Asma`u would have argued that the response to these challenges needs to be not the hope for a miracle, but bringing communities together to respond to the challenges, and searching for pragmatic, effective solutions to the underlying problems. Boko Haram’s leader, Abubakar Shekau, like Mahdists in the late nineteenth century, seems to be expecting a miracle. Like the counterterrorism experts who will search for him with drones, he thinks that technology—in his case, automatic weapons and YouTube videos–will give him miraculous power.

Western observers often assume that what the government needs is better technology. But without a good understanding of the setting and its history the help of high tech counterterrorist experts can have awkward results. What is needed is grass roots mobilization, interfaith cooperation, and a strategy for solving underlying problems. Nigeria does have the potential for this.

CNN: “Why Boko Haram has Nigeria living in fear”