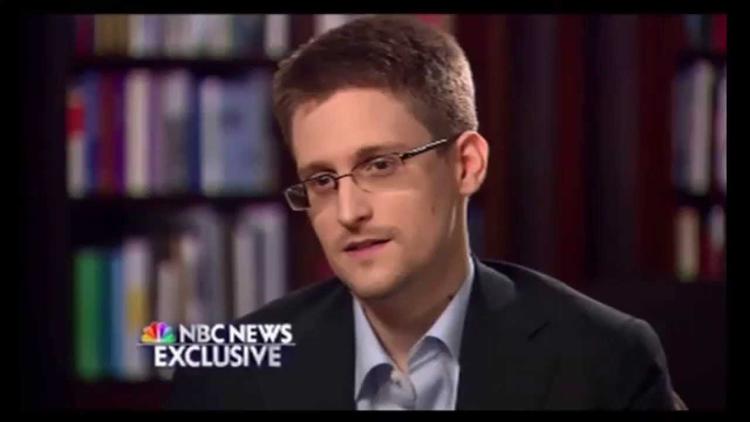 NBC News’s Brian Williams interviewed Edward Snowden in Moscow on Wednesday night. But then Mr. Williams followed it up with a panel discussion of whether Snowden is a hero or traitor. It was a cowardly and venal thing to do, and Mr. Williams should be ashamed of himself. By framing the post-interview discussion in these inflammatory and black-and-white terms, NBC nearly undid all the good journalism they accomplished with the interview. It was one more sad example of the broken ‘on the one hand, on the other hand’ model of news that dominates the US airwaves, which gave us the Iraq War (Saddam Hussein: WMD menace to the US or mere evil dictator?) and global warming denial as equal to science.

Mike McFaul, former US ambassador to Russia and now at Stanford University embarrassed himself by answering the question of whether Snowden harmed anyone by saying that he hurt German Chancellor Angela Merkel’s feelings when she found out her personal cell phone was tapped. Really, Mr. McFaul? I think we were asking whether any NOCs got their identity revealed by Snowden as Bush-Cheney outed Valerie Plame, or whether any US military personnel were endangered. Snowden didn’t hurt Angela’s feelings. The US government did.

The question Mr. Williams and his guests should have been discussing is whether Director of National Intelligence James Clapper and former National Security Agency head Keith Alexander are criminals.

What happened is fairly obvious. The US national security apparatuses took advantage of the rise of the internet and its dominance by US firms to subvert the First and Fourth Amendments of the Constitution and mountains of case law. They collected and stored the cellphone records and therefore the private lives and locations of tens of millions of innocent Americans. They inserted themselves secretly into Google’s servers and those of many other giant tech companies. They weakened encryption standards. They turned much American technology and software into spyware. They scooped up not only information about who Americans called, and when and where they were when they did it, but also used the transnational character of the internet to collect the actual texts of emails and the electronic files of telephone calls.

They used this data collection not against terrorists but in drug and other petty crime cases, sharing the illegally-gathered information with the DEA and local law enforcement agencies, who then lied to judges about how they had come to investigate these individuals in the first place. The domestic surveillance not only undermined the Constitution, it corrupted the entire justice system. Lest you reply that you can hardly shed tears for criminals, it should be pointed out that in some instances the Feds were prosecuting people for doing things not illegal in state law, and using illegal methods to do it. In other instances, they appear to have targeted civil society groups, interpreting their civil disobedience campaigns as criminal conspiracies.

They also engaged in political and economic spying on American allies such as Germany and France and friendly countries such as Brazil, and even tapped the personal phones of leaders like Merkel and Brazil’s Dilma Rousseff.

These guys went wild. A beat cop who entered somebody’s apartment without a warrant and used evidence found there to build a case against the person would be drummed out of the force if he got caught. But these high-tech rapscallions rampaged around in the private records of millions of Americans and it is still being debated whether they did anything wrong!

We don’t know the full damage they did to civil liberties when ordered to by their superiors. We know someone in the Bush White House instructed the CIA to destroy my own reputation because of my opposition to the Iraq War. Isn’t it likely that this sort of thing was routine? I’m not very important.

Not only was this massive domestic spying operation going on with impunity, but it was carefully hidden from the American public, with brutal and unconstitutional methods. Poor Sen. Ron Wyden (D-Or) got a whiff of some of it, but was forestalled by the [un-] Patriot Act from revealing it, even on the Senate floor. When sitting senators are being muzzled from discussing a massive US government program with the public, that is no longer a democracy. Who do they think is paying for their national security state? And when Wyden asked Director of National Intelligence James Clapper whether the NSA was spying on Americans, Clapper told a bald-faced lie. No, he said. He lied under oath. Clinton was impeached for a white lie over oral sex. Clapper lied to cover up a gargantuan violation of the constitution, but nothing has happened to him.

We can debate till the cows come home about whether Snowden had any other choice but to make his reveal, or had any other avenue to do something about these violations. Given that Barack Obama was briefed into them and let it go on, the likely answer is no. For all we know, the intelligence agencies blackmailed him into acquiescence. We know they spy on the other branches of government for their own purposes. And if it went to the Tea Party Supreme Court, we have reason to suspect that Mssrs. Scalia and Roberts would be perfectly happy to assign a policeman to every bedroom in the US.

But now that Snowden’s revelations are there, the American state faces a profound crisis. It can either return to constitutional values, or it can continue on its path to American Stalinism. That so many Americans seem completely undisturbed by what was done makes me think it is too late for democracy.

In any case, binary journalism only hurts the public debate, making it appear that people who want to trash the Bill of Rights are on the same footing as those who want to defend it.