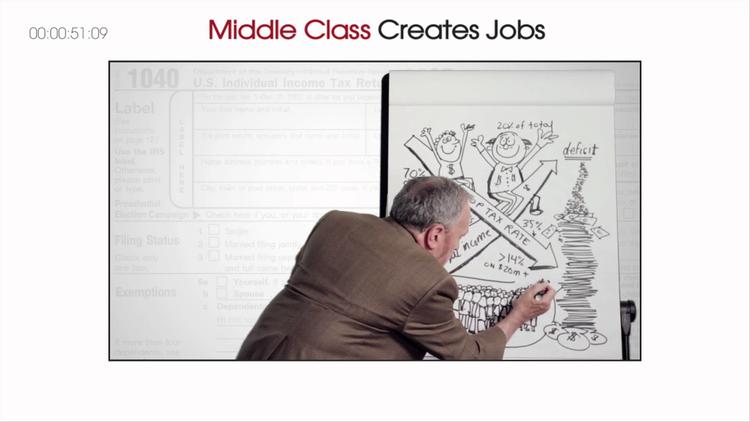 It's not a game for Americans who need jobs and education and public transportation and infrastructure repair. But public services continue to be cut, while the wealthiest Americans benefit the most from a government they say they don't want. They need government, but they don't want to pay for it.

Here are some reasons why the super-rich should be paying a lot more in taxes.

1. $2 of Every $5 Owned Today was Created in the Last Five Years, and Went Mostly to the Richest 10%, Mostly Untaxed

And most of it was accumulated passively, and unproductively, by just waiting out the stock market. As America's wealth increased from $47 trillion to an incredible $80.66 trillion in just five years, the richest 1% are estimated to have added an average of $5 million each to their fortunes. They pay no wealth tax, they can defer their income taxes, and they pay a reduced capital gains tax when they decide to cash in.

2. A Beggar Saving for a Hamburger will Pay More Sales Tax than the Entire Financial Trading Industry

There is no sales tax on financial transactions, no matter how speculative, and despite the fact that total trading value is many times more than the world economy. Derivatives trading was a major factor in the economic crash that depleted middle-class homeowner wealth in 2008. The trading volume on the Chicago Mercantile Exchange reached $1 quadrillion in notional value in 2012 (that's a thousand trillion). Yet no sales tax is paid.

3. It's Not Possible for a Financial Person to be Worth 100,000 Teachers or Firefighters

Defenders of excessive incomes use the "meritocracy" argument. But based on merit, some of the biggest moneymakers may be among the least worthy of us. Consider hedge fund managers who profit from shortages of homes and food, pay a smaller percentage in taxes than people making thousands of times less, and have the opportunity to defer all of their taxes. Or super-wealthy stock owners, like Mark Zuckerberg or Bill Gates or the Koch brothers, who take more from society than they give, yet can make up to $10 billion in one year, enough to pay the salaries of a quarter of a million medical technicians, and all of which can be tax-deferred indefinitely.

Google's business is based on the Internet, which started as the Defense Department's ARPANET; the National Science Foundation funded the Digital Library Initiative research at Stanford University that was adopted as the Google model; and Google Maps came from the massive geographical database of the U.S. Census Bureau.

Pfizer has thrived on government largesse, relying on basic research performed at the National Institute of Health. The company is also starting to profit from the Human Genome Project, which by one estimate will generate economic activity of about $140 for every dollar spent.

Just as our public research has been misappropriated, so has our land. The recent episode with freeloading Cliven Bundy highlighted the takeaway from the public, the sense of entitlement among the rich, and the disdain for a government that is supposed to protect the common good. Yet instead of defending the commons, our government leaders see it as a means of profit. Paul Ryan's Path to Prosperity proposed to sell millions of acres of "unneeded federal land." Representative Cliff Stearns even recommended that we "sell off some of our national parks."

5. The Great Majority of Tax Breaks go to the Rich

Most of the annual $1.3 trillion in "tax expenditures" (tax subsidies from special deductions, exemptions, exclusions, credits, and loopholes) goes to the top quintile of taxpayers. One estimate of total tax expenditures is a nearly incomprehensible $900 billion a year.

Paul Ryan’s great-grandfather started a construction firm, still in operation today, which in the 1950s received government contracts to help build the Interstate Highway System. Ryan attended a public high school and a public university. Part of his tuition was paid with Social Security survivor benefits. His mother, whom he refers to as his "role model," rode public transportation every day to earn a degree at the University of Wisconsin, a public university.

We're all dependent on the government services that we too easily take for granted. The wealthiest Americans receive the greatest benefits, but they insult the rest of us by treating their tax responsibility like a game.

Paul Buchheit is a college teacher, an active member of US Uncut Chicago, founder and developer of social justice and educational websites (UsAgainstGreed.org, PayUpNow.org, RappingHistory.org), and the editor and main author of "American Wars: Illusions and Realities" (Clarity Press). He can be reached at paul@UsAgainstGreed.org.

Moveon.org: “Robert Reich: Why Taxes Have to Be Raised on the Rich”