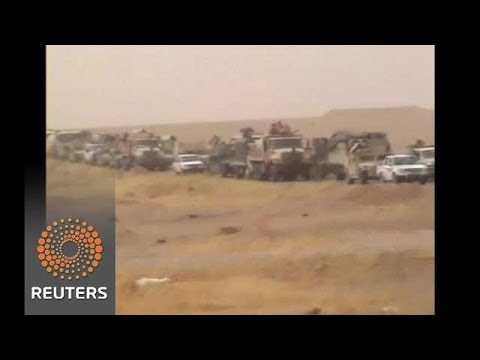 The Islamic State of Iraq and Syria [ISIS] is apparently keeping control of Mosul, Iraq’s second largest city of 2 million, and advanced to take Tikrit, the birthplace of Saddam Hussein, where they held a huge Sunni prayer session.

It has been pointed out by a number of commentators that ISIS (also sometimes called the Islamic State of Iraq and the Levant or ISIL) is probably too small an organization of cadre fighters actually to have accomplished all this by itself. Sunni tribes and townspeople appear to have joined in the attacks on the Iraqi military, which, ran away.

Since the military is largely Shiite and had been lording it over local Sunnis as though they were an occupied and humiliated population, it isn’t any wonder that they fled in the face of a popular uprising against them. They couldn’t have stood against so many hostile Sunnis. (There is a parallel to the Taliban withdrawal from Kabul in late 2001, long before they would have had to do so on purely military grounds As Pushtuns in a large hostile Tajik city, they had to worry about a popular massacre of the occupiers; this had happened in Mazar in 1997). But it is also the case that the new Iraqi army is green, whereas ISIS has been involved in fierce guerrilla war for two years and is way ahead on tactics.

Spokesman for the Islamic State of Iraq and Syria Adnan called for its fighters to advance on Baghdad. He addressed Prime Minister Nouri al-Maliki as an incompetent screw-up who had squandered a historic opportunity for his “people” [the Shiites?] by his misrule of Iraq.

The ISIS militants were stopped 70 miles north of Baghdad by regime air strikes on Thursday morning according to the Iraqi government. But a BBC correspondent is cautioning that the Iraqi government is frequently overly optimistic. ISIS is still trying for the oil refining city of Baiji, which they had held on a number of occasions during the period of American military occupation. They also want Samarra, a largely Sunni city that is the site of a major Shiite shrine with associations with the messianic Twelfth Imam whom many Iraqi Shiites expect to return, as Christians expect the return of Christ. An attack on the Golden Dome in February 2006 kicked off a Shiite-Sunni civil war.

Although PM Nouri al-Maliki, the Shiite prime minister, has asked for US air strikes on ISIS, the White House is declining to intervene so directly but is pledging to help the Iraqi army up its game.

Since the central Iraqi army is doing so poorly, Iraqis are mobilizing ethnic militias. Foreign Minister Hoshyar Zebari, a Kurd, is pledging that the Kurdistan Peshmerga militia will cooperate with the Iraq army in keeping Kirkuk out of ISIS hands and recovering Mosul. And, indeed, the Kurdistan Peshmerga paramilitary seized Kirkuk on Thursday morning.

Grand Ayatollah Ali Sistani and his colleagues in Najaf, the seat of Shiite religious authority, issued a statement roundly condemning the Iraqi political class for its divisions and wrangling and calling on them to unite to protect Iraqi citizens from the terrorist groups that had taken over Ninevah Province (i.e. Mosul and environs). Sistani also expressed condolences for the Iraqi troops killed by ISIS fighters and pledged the religious authority’s support to the Iraqi army in this struggle. It is more or less a declaration of Shiite jihad on ISIS.

Meanwhile other members of the Shiite establishment are pledging a war of militias. The leader of the The Islamic Supreme Council of Iraq (ISCI), Sayyid Ammar al-Hakim, said that there is no place in Iraq for ISIS extremists, and pledged that he will be the first to volunteer to go to the front to fight them. ISCI has a paramilitary, the Badr Corps, with close links to the Iranian Revolutionary Guards. It had largely been absorbed into the Iraqi army and Interior Ministry, but the use of the word “volunteer” suggests that Ammar may be thinking of reviving it.

Likewise, Shiite clerical leader Muqtada al-Sadr has offered to create “Peace Brigades” to fight what he called Sunni terrorists and “undisciplined militias” and to protect Shiite shrines and Christian churches from ISIS militants. He attacked al-Maliki implicitly for having provoked the crisis.

Shiite militias could be more effective than the Iraqi army. In Syria, it was Lebanese Hizbullah intervention that allowed the regime to recover Homs from Jabhat al-Nusra and ISIS. Militias are after all oriented toward guerrilla tactics. And, you can bet that master strategist Qasem Sulaimani, head of Iran’s Jerusalem (Quds) Brigade of the Iranian Revolutionary Guards, is planning out a counter-guerrilla war as we speak.