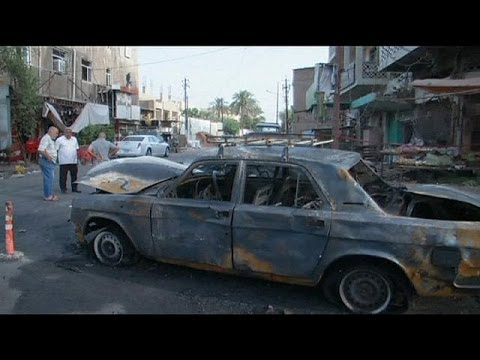 Members of an extremist Shiite Muslim militia have been recruited to fight Sunni Muslim rebels and militias in Iraq’s Anbar province. But for some Baghdad-based fighters the battle is taking place too close to home: They’re being forced to fight friends and family.

Like many other young men who live in the low-income Sadr city district of Baghdad, Sijad Abdul-Haq couldn’t find a job. So he went on the payroll of a mainly Shiite Muslim religious militia known as the League of Righteous.

The League is designated a terrorist organisation internationally and it remains one of the most feared extremist groups in Iraq; even noteworthy Iraqis, like Shiite cleric Muqtada al-Sadr, as described the league as criminals and murderers.

And in recent months, the League has been recruiting new members – particularly among poor and unemployed Shiite Muslim men – simply by offering them a decent monthly wage. It’s a form of social welfare but one that comes at a cost, as has been previously reported by NIQASH.

Many of the young men who sign on with the League of Righteous just because they are unemployed end up being trained to fight, and then possibly, end up taking an active part in the militia’s more violent activities. The League of Righteous recently ran for office in Iraq’s general elections and is known to support Iraq’s current Prime Minister, Nouri al-Maliki.

And recently the League has been demonstrating that support in more physical ways: By joining the Iraqi army as it fights to regain control of Iraq’s Anbar province, where Sunni Muslim protests have turned into a pitched battle for control over the mostly Sunni Muslim province.

And Abdul-Haq was one of the young men given orders by the League to go and join the fight in Anbar. But like several other men that NIQASH interviewed, Abdul-Haq had a problem with this. Because his father is a member of the Shiite Muslim Bahadil tribe but his mother comes from the powerful Dulaim tribe in Anbar, which is a Sunni Muslim kinship group.  And Abdul-Haq was only too well aware of the fact that his uncles and cousins were fighting in Anbar and that as a member of the League of Righteous militia, he might be forced to fight against them.

The Iraqi army in Anbar apparently called the League of Righteous militia in to help them in their fight in Anbar because they needed the help of Shiite Muslim militias who had already had experience fighting in Syria and therefore, had fought against Sunni Muslim extremist militias, like the Islamic State of Iraq and Syria, or ISIS, before. This group is well known for former affiliations with extremist organization Al Qaeda and is present in Anbar too.

“I was given orders to go and fight in Anbar but I felt terrible about it,” Abdul-Haq told NIQASH, sitting in a Baghdad café; he refused to give his real name or allow his photograph to be taken. “They might kill me if they know I talked about this, or that I talked about going to Anbar.”

Abdul-Haq also convinced his friend from the militia to talk about his experiences in Anbar.

Zine al-Abidine is 32 years old and graduated from the University of Basra. But even with a degree he was unable to find a job and he too joined the League of Righteous. He too was recently sent to Anbar to fight with the Shiite Muslim militia and he too went with mixed feelings.

First, he says, he fought in the Abu Ghraib district and then he went to fight in the Sajar neighbourhood in Fallujah.  In Sajar, al-Abidine found himself next to the corpse of one of the Sunni Muslim fighters. Upon turning the body around, he realized it was someone he knew.

From 2000 onwards, Hashoush and al-Abidine had shared a dormitory at university for four years. “I will never forgive myself for participating in that battle,” al-Abidine concludes.

“Everybody knows that the Shiite militias are driven to fight by their beliefs,” one of the League of Righteous’ senior members told NIQASH. The interview took place in another café and although this man was dressed like a villager, under his civilian clothes, everyone could see the butt of his pistol. “They fight to defend the Shiite doctrine and to protect their fellow Shiites. But,” he admitted, “some of our members do have Sunni cousins or friends and often they come from Anbar province, because it’s near Baghdad.”

The League of Righteous leader described several instances where this had happened, including one young man under his command who had been trained to fight in Iran but after fighting in two different parts of Anbar, he refused to fight in a third. “When he was ordered to go to Khalidiya he refused and said he wanted to quit the war,” the man told NIQASH.  “I couldn’t understand why but then his father called me to tell me that he had eight brothers in Khalidiya and that his son had spent most of his life there. So we accepted the young man’s objections and we sent him back to Baghdad.”

Although the militia members say they are not the only ones feeling anguish about fighting in Anbar, the League leader was quick to explain away the young men’s stories. “Sijad Abul-Haq is a well trained sniper so we couldn’t afford to let him off his duty,” he said. “Zine al-Abidine just had some bad luck and the other young man was lucky in that he had a high ranking relative inside the League who helped him get back to Baghdad. On the whole though, we won’t allow our members to disobey our orders – even if they have mixed Sunni-Shiite blood.”