By Chris Homewood, University of Leeds

What do The Amazing Spider-Man 2, X-Men: Days of Future Past, and Godzilla have in common? Aside from belonging to the summer blockbuster class of 2014, they all feature China in some form or another.

Many of these Chinese moments are fleeting – the future X-Men, for example, mount their last stand from a temple in an unspecified Chinese mountain range – but from an industry perspective, their inclusion is far from incidental. They are symptomatic of Hollywood’s renewed targeting of the tightly regulated Chinese film market, which is now the second largest after the US, making an estimated $3.6bn (£2.1bn) in 2013.

Sensing a gold rush, the Hollywood majors are scrabbling to incorporate more Chinese elements in their most lucrative blockbusters. They’re not just trying to pull in larger Chinese audiences (who typically enjoy US feature films), but to garner favour with China Film Group (CFG), the state monopoly that runs cinemas, produces, finances and distributes films, and controls the import of foreign titles.

Behind the great wall

Although Hollywood dominates the import quota, it is merely a big fish in a small pond – CFG only allows 34 foreign films a year, and American films that make it to Chinese screens are often subject to measures designed to protect domestic productions, such as competitive release scheduling. Crucially, these films also only keep a 25% share of their Chinese box office receipts.

In a bid to figure out the Chinese market and circumvent the so-called “great wall” quota, Hollywood has turned to the China Film Co-Production Corporation (CFCC) and the benefits of its “joint-production” model.

Sino-American co-productions count as domestic Chinese ventures, and they yield a healthier 38% box office return – but to do so they are required to include positive “Chinese elements”.

Michael Bay’s Transformers: age of Extinction, which opens in UK cinemas this weekend, is third American film to adopt this model. One of the most hotly anticipated summer blockbuster of 2014, it features a heavily China-inflected story.

The film’s release was prefaced by the sleeper hit Looper and the summer tentpole Iron Man 3, both of which tested the waters of the co-production agreement in 2012 and 2013 respectively. Both films were jointly produced with Beijing-based DMG Entertainment, whose CEO Dan Mintz (originally a native of New Jersey) is widely regarded as “Hollywood’s Mr China”.

But given that from a financial perspective, Hollywood currently needs China more than China needs it, what exactly does China stand to gain from the co-production model?

The answer would appear to be “soft power” – the culture-based influence which political scientist Joseph Nye famously defined as “the ability to get what you want through attraction rather than coercion or payments”. China still suffers from something of an international image problem (to put it mildly); the co-production model offers the Chinese authorities an opportunity to use Hollywood’s global reach to transmit favourable narratives and images about China to the western (and westernised) world.

Before granting joint-production status, the CFCC requires positive Chinese elements and a significant Chinese cast presence. In this regard, China is using its “hard” power-base (read: economic inducements) to compel Hollywood’s co-operation, effectively securing the Dream Factory as an adjunct Chinese soft power asset that can help spread Chinese dreams and culture around the world.

While Looper showcased Shanghai as an ultra-modern, global centre of the future, one that has a rehabilitating effect on an errant American, Iron Man 3 lends screen time to the famous Grauman’s Chinese theatre – now owned by the Chinese electronics multinational TCL, which signed a tie-in deal with Marvel Entertainment as part of a strategy to raise its company profile in the American consumer market.

Iron Man 3 also tellingly eschews the predictable Orientalist binary of “East threatens West” common in Hollywood’s output, most obviously by changing the ethnicity of its villain, the Mandarin. An archetypal “yellow peril” in his original comic book incarnation, the terroristic Mandarin of Iron Man 3 is divorced from his inscrutable Chinese origins.

Instead, Chinese characters feature largely in benevolent form, the main example being Dr Wu (Wang Xueqi), a skilled surgeon who utilises high technology to perform a life-saving operation on Tony Stark at the film’s close.

Still, it’s difficult to not be cynical about Hollywood’s involvement in these prototype East-West hybrids, which largely pay little more than lip service to the requirements of co-production status.

The briefly seen Chinese setting of Looper was incidental (the foreign elements were originally set in France), and the Chinese version of Iron Man 3 features several Chinese scenes and faces that never made it to the international cut.

This sense of bare-minimum box ticking was not lost on the CFCC President Zhang Xun, who delivered a cautionary reminder to the great and good of Hollywood at the 2013 US-China Film Summit: “We want films that are heavily invested in Chinese culture, not one or two shots.”

Transformers: Age of Extinction clearly attempts to meet this standard. A joint venture between Paramount Pictures, the state-owned China Movie Channel (CMC) and its distribution partner Jiaflix Entertainment, it features Chinese actors (such as Li Bingbing) in substantial, China-affirming roles, plenty of Chinese product placement and huge action sequences set in Hong Kong and mainland China that feature national landmarks such as the Great Wall. And unlike Iron Man 3, the same version of the film will be released in all territories.

For Hollywood, indicators of the film’s Chinese success will be immediate, based on box office receipts that, going on early indications, promise to be spectacular.

For China, on the other hand, the film’s success will help take the measure of a less tangible, longer-term problem: whether the co-production model helps the country to develop its “soft” influence in the world. 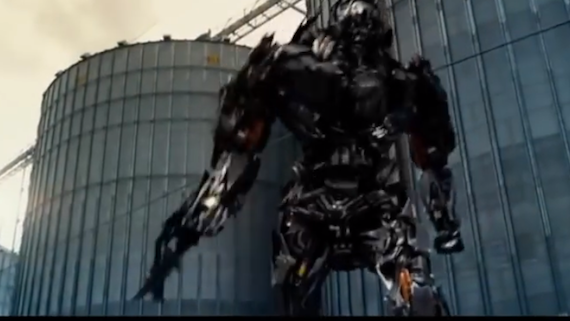