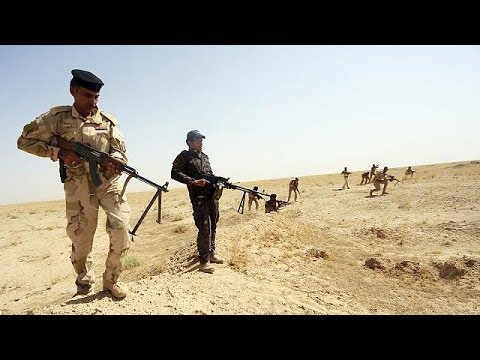 NIQASH visited Hawija, a large northern Iraqi town near Kirkuk, which is currently controlled by Sunni Muslim extremists and local tribes. The town is dominated by ISIS’ black flags and ISIS’ rules. And on the way into town, everybody gets a free Koran.

The area south of the Iraqi city of Kirkuk is now controlled by Sunni Muslim extremist fighters – and part of this includes Hawija, a large, mostly Sunni Muslim town. Although there have been clashes between the Sunni Muslim extremists and the Iraqi Kurdish military who control Kirkuk, the road between the two centres is still open. It is only being used by a few cars: People returning to Kirkuk after visiting their relatives in Hawija or people from Hawija fleeing to Kirkuk, afraid of further problems in the area.

To get to Hawija you need to go through the Kiwan area, which is now known as the “death strip”. The two opposing forces, the Sunni Muslim extremists led by the group, the Islamic State of Iraq and Syria, or ISIS, and the Iraqi Kurdish military, known as the Peshmerga, are stationed on either side of the road. Both sides are on high alert. If anyone fires a bullet over the other side, fighting breaks out.

Hawija was taken over by Sunni Muslim extremists and members of local Sunni Muslim tribes around June 16 after the Iraqi army withdrew.

As you pass the last Peshmerga checkpoint, the soldiers there advise you not to go any further unless it is extremely important. People are being killed on this road and also being abducted by ISIS, they say.

“Be careful, they will ask you well prepared questions about why you’re going into this area and they will verify the information you give them,” one of the soldiers told me. “If you give them the wrong information, you will be in a lot of trouble.”

I had already taken his advice. I studied at the art school in Hawija for several years, I know a lot of people there and I thought it wouldn’t be difficult to enter the area if I carried my ID card from the art school.

After driving for around 40 minutes past the last Peshmerga checkpoint, we came to another checkpoint. And when we saw the black flag of ISIS we knew that we had reached their area. The checkpoint was only a few kilometres outside of the Hawija district. Two masked men waved the car down and came towards us.

The taxi I was in had two other passengers, a Sunni Muslim man and woman, and they were not afraid about coming here because they were originally from Hawija.

When the men got to the car, one of them asked me why I was going into Hawija; I quickly pulled out my art school ID and said I needed to pick up my graduation certificate so I could apply for a job. The masked man told me that the art school was actually closed and that there are no new jobs going in Kirkuk. So why are you picking it up and what are you actually going to do with it?, he asked.

I explained that I knew some of the art school staff and that they were going to help me get a job.

He checked my ID card again, carefully, and then he gave me a copy of the Koran. He gave the other passengers a Koran too. “May God be with you,” he said and let us pass.

Haider, our taxi driver, who drives this road almost every day, said that from the very first day that ISIS took over they had been giving out copies of the Koran to each and every one of his passengers.

As we entered Hawija the first thing we saw was the building that was formerly used by the Iraqi army’s 12th Division. A large sign now hangs over the main entrance, reading “ISIS – Secret Operations Room” in big white letters. According to Iraqi Kurdish officials, ISIS now has an intelligence section so it can better monitor its rivals’ operations.

We didn’t stop driving. We passed by many buildings. One of them was the art school where I had studied. There was no sign on the building but masked and unmasked gunmen surrounded it. I asked what had happened to the art school and was told that ISIS had turned the school into a detention centre where members of the police and army and other locals were imprisoned.

In the past, the most important building in Hawija was the headquarters of the district council. This building has now become the centre for tribal relations. “ISIS – Public Relations – Tribal Section” was written in large letters on the building’s wall.

Asking around some of the locals later, they say that ISIS is adopting a different, more moderate strategy here. It is fostering good relations with local Sunni Muslim tribes and has told them that they will be in charge in this area. It has also assigned local individuals to start a dialogue with other Sunni Muslim tribes in the area to try and get them to enter into alliances with ISIS too.

However our taxi driver also tells us that although ISIS has informed the tribes that they own the city, the extremist group has also said that the city will operate under ISIS’ rules. Anyone who violates those rules will be punished by 80 lashes, the taxi driver explains.

We drive on. The former Hawija police headquarters has become the ISIS military headquarters. There’s a sign saying “Main Unit – The Army of the Islamic State of Iraq and Syria”.

The town looks relatively normal and people are moving around even though work in all state institutions has ceased. There are a lot of cars carrying militants and flying their distinctive black flags driving around the city and according to the locals, some of those cars probably also contain members of local tribal militias; however these have been instructed not to carry any flag other than ISIS’.

It is clear to everyone who lives here that ISIS is the most senior authority in the town. That is even though the Naqshbandi army has been involved in resistance activities in the area for some time. The group, which has strong links to the outlawed Baath party and which calls for ongoing resistance against the “Safavid”, or Iranian and Shiite Muslim, occupation of Iraq, is classified as a terrorist organization by many. In 2012, the Naqshbandi army tried to attack Hawija’s council buildings but the Iraqi army was able to wrest control back from them.

Hawija was also the site of ongoing Sunni Muslim anti-government protests that were eventually closed down violently by the Iraqi army in early 2013, resulting in as many as 50 deaths.

So perhaps it is no surprise that ISIS have found sympathetic allies here.

ISIS have turned the Abdul Wahid mosque and the Shahidan mosque into Islamic law courts and there they act as if they have the highest judicial authority. A Hawija doctor told me that any person who violates ISIS rules is trialled in one of these two mosques and also sentenced there.

I was also told that ISIS will soon announce a wali, or guardian, for Hawija and for the other parts of Kirkuk province that they control – this includes Rashad, Zab, Riyadh and Abbasi. Once a wali is appointed, ISIS plan to re-open various institutions and businesses that are closed.

One of the employees at Hawija’s courts said that most of the district government’s staff had left town and those who had stayed were not going to work because they were worried that the central government would just consider this time an open vacation, which was what they were apparently doing in Mosul. The staff also know that ISIS won’t be paying their salaries.

“ISIS is calling people in the alleys and the markets to go back to work,” says this former administrator, who stayed Hawija but who didn’t want to give his name. “But only a few people are responding to those calls.”

The fact that the provincial authorities are no longer running anything is making life very difficult for locals. Water and electricity are only available for a few hours a day, the prices of market goods have risen and there are fuel shortages.

Rubbish has been piling up on the main streets over the past few days; but groups of local young people have started a cleaning campaign because they’re convinced that if they wait for the municipal authorities to clear anything away, they’re going to be waiting for a very long time.

The Hawija district is also one of the biggest grain producers in Iraq, with around 4,500 farmers working here according to Kirkuk’s Directorate of Agriculture. However the granary doors in Hawija are currently closed and farmers cannot bring their crops there.

One farmer we met in the city told us that there were probably over 100,000 acres of grain waiting to be harvested. “If they [ISIS] don’t find a solution soon we will loose all our grain this year,” he complained.

And even if the granary does open again, the other problem facing the farmers is how to get their crops out of the district when movement between Hawija and Kirkuk remains dangerous and difficult.

Most of the people we talked to in Hawija said that they would never allow Prime Minister Nouri al-Maliki’s army to rule over them again. But they also all expressed their doubts about ISIS; they just don’t know what is going to happen next and what the future holds, under the rule of this group.