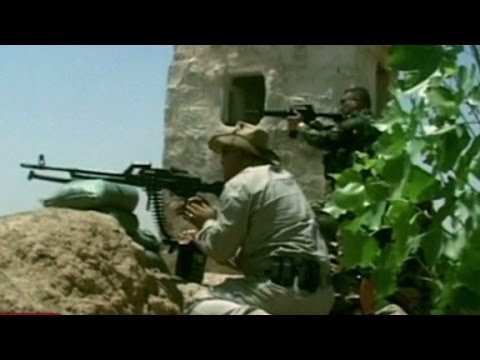 As the number of American troops sent to Iraq nearly doubled on Monday and the White House continues to flex its executive privilege to make unilateral military decisions, citizens and lawmakers alike are raising concerns and objections over the escalating American presence in the country, asking: Are we nearing 'mission creep'?

Echoing the concerns of many, the lawmaker continued: "The President has promised to prevent ‘mission creep.’ But how many Americans will we deploy? How much money will we spend? How long until we demand the Iraqi people stand up and defend their own government?"

Walsh's comments came a day after it was announced that President Obama had deployed 300 additional troops, as well as more helicopters and armed Predator drones, to the war-torn nation. Operating under the War Powers Resolution of 1973, Obama has thus far sent roughly 650 American troops to Iraq. The legislation permits the president to send up to 770 troops to the country without Congressional approval.

During a Pentagon press conference on Tuesday, press secretary Rear Adm. John Kirby refused to rule out the possibility that more troops would be sent.

“Is there a grand total? No," Kirby told reporters. "But in terms of the grand total limit, he’s the commander in chief. He makes these decisions. And he needs the freedom to make those decisions as he and the military commanders and the civilian leadership here in the Pentagon advise him to.”

“There's no mission creep,” Kirby insisted when asked, but added that the situation in Iraq is "fluid" and that both the President and military leadership "expect and should have a certain measure of flexibility."

The Pentagon's repeated calls for "flexibility" in responding to the situation in Iraq, in addition to President Obama's claimed authority to send even more troops, has many on alert.

Last week, two members of Congress sent a letter to President Barack Obama asking that respect the Constitutional requirement to seek Congressional authorization before using military force in Iraq. Citing that letter, a coalition of 32 organizations including Iraq Veterans Against the War, Codepink and Peace Action issued a statement on Tuesday calling on other lawmakers to support their call and "demand a vote."

"The current situation in Iraq has grabbed the nation’s attention, and the President has already deployed U.S. military personnel and assets in response to the crisis," the group writes. "Yet the President and Administration officials have also suggested that the U.S. military may take further action, including potentially airstrikes and other uses of military force."

The letter cites recent news reports that have suggested that the President may proceed with further military intervention in Iraq without any Congressional approval.

In a memo sent to House Speaker John Boehner on Monday, Obama wrote that the troops were being deployed "for the purpose of protecting U.S. citizens and property" from the fighters associated with the Islamic State of Iraq and Syria (ISIS), recently renamed the "Islamic State." However, he added that the force "will remain in Iraq until the security situation becomes such that it is no longer needed."

CNN: “US says it will send additional troops to Iraq”