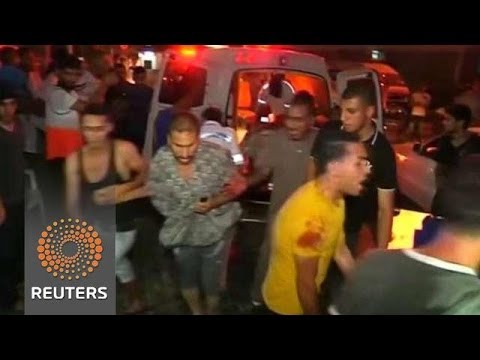 GAZA CITY (Ma’an) — The Israeli military on Monday evening sent text messages and phone calls to residents of all cities in the northern Gaza Strip and parts of Gaza City telling them to evacuate their homes “immediately,” potentially displacing more than 400,000 people.

The military said in a statement that it had told the residents of Shujaiyya and Zaitoun neighborhoods in northern and eastern Gaza City as well Jabaliya, Beit Hanoun, and Beit Lahiya cities in northern Gaza to evacuate their homes and leave for central Gaza City.

The Israeli military has previously said that it would treat all civilians who stay behind in areas it had deemed off-limits to be combatants.

The warnings come after an Israeli drone strike killed 10 people in a playground in al-Shati, after Gaza militants fired rockets into Israel earlier in the day in response to Israeli shelling.

Israeli shelling and airstrikes on Monday killed 22 and injured more than 100, while medical crews found 12 more bodies in the rubble, bringing the total number dead since the beginning of hostilities 21 days ago to at least 1,067.

The UN’s Palestine refugee agency UNRWA said early last week that 43 percent of the Gaza Strip had been deemed off-limits to civilians.

The Israeli assault has already displaced 135,000 people in the last 21 days, as more than 2,000 homes have been destroyed and the Israeli army has told tens of thousands of flee their homes.

All borders in and out of the Gaza Strip are shut to civilians, however, and UN-designated shelters have been bombed repeatedly in Israeli airstrikes and shelling.

Operation Protective Edge was launched 21 days ago in what Israel said was an attempt to stop rocket fire from the Gaza Strip, which had increased after Israel launched a massive operation in the West Bank that left 10 Palestinians dead, 130 injured, and more than 600 Hamas-affiliated individuals in prison.

The operation, named “Brother’s Keeper,” was launched in order to find three Israeli teenagers who disappeared in June from the Jewish settlement of Gush Etzion in the West Bank.

Israel blamed Hamas for the kidnapping without any evidence, a charge the group denied.

Hamas has said since the assault began that it would only accept a ceasefire on the condition that Israel ends its eight-year blockade of the Gaza Strip, which has led to recurring shortages of basic necessities as well as electricity, fuel, and water.

Israel, however, has refused to accept this condition, saying it would keep the assault going until it undermined Hamas’ military capabilities, particularly its tunnels system.

Reuters: “(GRAPHIC IMAGES) Panic on the streets of Gaza”