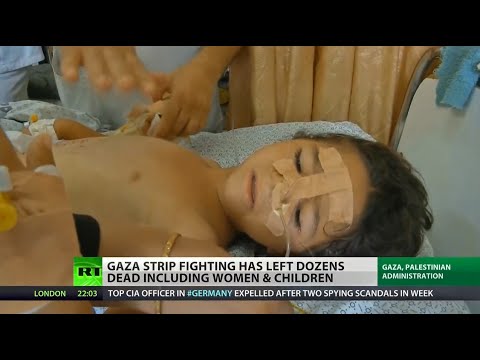 A horrible video is circulating on social media, of a Palestinian father in Gaza who is bringing a toy to his four year old son, only to find once he enters his home that his son’s head has been crushed by Israeli shrapnel. That is the face of Israel’s current military operation against Gaza to the outside world.

But from the point of view of Israeli hawks, the point of a campaign like the present one against the Gaza Strip is to degrade the military and organizational capabilities of the enemy. They clearly do not care if they thereby kill dozens of women, children and non-combatants (they are). The important thing for them is to accomplish what they see as a narrow military and counter-terrorism objective.

It is a bizarrely ahistorical quest, as though the Israeli leadership lives in a bubble isolated from the demographic and political realities of its neighborhood. They seem to think they are hanging by their fingers from a cliff, that Hamas is prying their fingers loose, and that if only they can push Hamas back, they can go on clinging to the cliff for another period of time, avoiding falling. They don’t seem to realize that if this is actually their situation, it is untenable in the long run. The current campaign will end in failure and likely will help doom the Israeli enterprise over the next few decades.

The Israeli hawks have been trying to destroy Hamas since the late 1990s, when it went from a favored client of the Israeli state (having received support from Tel Aviv in the 1980s to offset the Palestine Liberation Organization) to enemy. The military wing of Hamas launched a vicious campaign of terrorism inside Israel in response to the doubling of the Israeli squatter population on Palestinian land in the 1990s. In the early zeroes, the Israelis conducted a campaign of murder against Hamas leaders, including against civilian party leaders with no operational role. They assassinated Sheikh Yasin, the spiritual leader of the movement, with a rocket fired from a helicopter gunship at his wheelchair as he was issuing from a mosque, killing and injuring people around him, as well. Sheikh Yasin had spoken of the possibility of a decades-long truce with Israel even though he rejected its legitimacy. In his absence, the truce talk rather declined, though Hamas has proved itself willing and able to negotiate long-lasting cease-fires with Israel; most often it has been the Israelis who violated them.

The theory behind the murders of leaders is that leadership is a rare quality and that if you inflict attrition on leaders, you will fatally weaken the organization. Israeli intelligence operatives drew on social science research about how many top-level managers a Western corporation could lose before it collapsed. In societies where kinship systems remain relatively strong, however, you don’t have a hierarchical GM corporate flow chart for leadership, and if you kill someone’s cousin, the republic of cousins comes together for revenge. This whole theory and whole operation vindicates the old saw that Government Intelligence is an oxymoron.

Because of the Israeli attacks on Hamas figures, the party became more popular both in Gaza and the West Bank, and it won the January, 2006, Palestine Council elections in both territories. So I think we can pronounce the serial murders committed by then Prime Minister Ariel Sharon an abject failure.

Next the Israelis kidnapped about a third of the democratically elected Palestine National Council and illegally sequestered them and helped the PLO make a coup in the West Bank. They failed, however, to dislodge Hamas from the Gaza Strip.

From 2007 the Israelis put a severe and creepy blockade on the Gaza Strip, in hopes of making Hamas unpopular, figuring people in Gaza would blame it for the consequent collapse of the Gaza economy. This policy is illegal in international law. Israel is the occupying power in Gaza, and the 1949 Geneva Conventions forbid military occupiers from collectively punishing non-combatants among the occupied population. In response, Palestinians in Gaza just got really good at smuggling, developing an extensive tunnel network into the Sinai desert. My guess is that despite the Israeli naval blockade, things must get brought in sometimes by sea, as well.

Among the things they imported were small rockets, with which to harass the Israelis who had moved into the homes in what is now southern Israel that used to belong to the Palestinians of Gaza.

Israel’s 2008-2009 and 2012 episodes of what hawks call “mowing the lawn” in Gaza were aimed, as well, at inflicting attrition on the rocket stock and at killing Hamas leaders and disrupting their institutions. (Since Hamas had been democratically elected in 2006, the police in Gaza had to report to the party after that, so the Israelis bombed the police stations; but most police were not Hamas cadres).

Hamas had received some support from Iran and Syria. My guess is that it has been exaggerated, but it was there. The attempted Syrian revolution and then the outbreak of civil war in Syria posed a problem for Hamas. The Syrian Muslim Brotherhood is a kindred movement, and it is opposed to the Baath government in Damascus. So Hamas’s dependence on Iran and on Bashar al-Assad was, let us say, awkward.

When Muhammad Morsi was elected president of Egypt in summer 2012, Hamas gravitated to him as its preferred sponsor and mostly broke with Syria and Iran. Unfortunately for Hamas, Morsi was overthrown in July of 2013, leaving Hamas high and dry and with no sponsor.

Worse, current Egyptian President Abdel Fattah al-Sisi and the officers who back him really, really hate political Islam. They banned the Muslim Brotherhood, killed over a thousand members in crackdowns on sit-ins, and imprisoned perhaps 20,000 to 30,000 members and sympathizers. Al-Sisi sees Egypt’s security problem with Bedouin and fundamentalists in the Sinai Peninsula as a side-effect of Hamas activities.

So the Egyptians have been unusually energetic in closing off the smuggling routes and tunnels into Gaza from Sinai. This move has, along with the vigorous Israeli blockade, contributed to fuel shortages and water and sewage problems as well as economic distress. At the same time, young Palestinians in Gaza have rebelled against Hamas and some say they want to see it overthrown the way Morsi was.

My guess is that Israeli Prime Minister Binyamin Netanyahu and other Likud leaders see Hamas as unusually vulnerable. In essence, al-Sisi is shoring up Israel’s western flank. The Israeli hawks no doubt believe that if they can destroy, or get Hamas to fire off, large numbers of its rockets, that they can deplete that stock and that al-Sisi will help ensure that it is not replenished, and that Syria and Iran might not be so eager now to help their fair weather friend.

With leaders killed and rockets depleted, the Israeli hard liners probably believe, Hamas may be fatally weakened. At the very least, it will be less able to resist future episodes of lawn mowing in Gaza.

The theory behind this campaign, however, is incorrect. Hamas is perfectly capable of building more rockets, even if they are smaller and have less range than the imported ones. And killed leaders can be replaced by their cousins.

Gaza’s population has grown to about 1.7 million. It has a high rate of population growth and will likely double over the next two or three decades. Egypt will never allow the Palestinians of Gaza to become refugees in the Sinai. In the 2008-09 campaign, when some Palestinians attempted to flee into Egypt, the Egyptian military just shot them. So the Palestinians of Gaza are Israel’s problem, now and in the future. Gaza faces increasingly dire water problems, a recipe for severe future conflict. Israel eventually will face not 4.3 million stateless Palestinians but twice that.

As the living conditions in Gaza deteriorate, and people begin to thirst to death, the international outcry will grow louder. The boycott, divestment and sanctions movement will grow, at first mainly in civil society and the business world, but ultimately it will be adopted by governments in the face of an absolutely unacceptable ongoing humanitarian catastrophe.

Ironically, the very mechanisms of economic sanction engineered by Israeli and pro-Israel lobbies against Iran and Syria are likely increasingly to be applied to Israel itself. The Israeli economy is fragile and highly dependent on outside trade and on European technology transfer, which could be sanctioned.

All it would take would be for the economy to be hurt enough to make it attractive for more Israelis to emigrate every year than immigrate for a reverse snowball effect ultimately to doom Israel, slowly and over decades. Already, a million first and second generation Israelis live abroad, finding Israel too nervous-making as a place to reside. It may even be that many of them are being counted as Israeli residents by the propagandists in Tel Aviv, so that the figure of 6 million Jews actually in Israel is exaggerated.

The Israeli right wing will likely fail in its attempt to subject Gaza and uproot radicalism there, since the radicalism grows out of the conditions that Israel imposes on the Palestinians. And, it is incurring increasing ill will with its episodic lawn-mowing, since the outside world is unwilling to accept that it was necessary to kill all those women and children and soccer spectators with aerial and naval bombardment.

As in the Bill Murray science fiction vehicle “Groundhog Day,” the Israelis, the Palestinians and the world are doomed to relive these periodic slaughters over and over again, until slowly, inexorably, they further corrupt the Israeli soul and make the Zionist enterprise so unlovely in the eyes of the world that it loses crucial support, and the snowball rolls uphill, getting smaller and smaller.