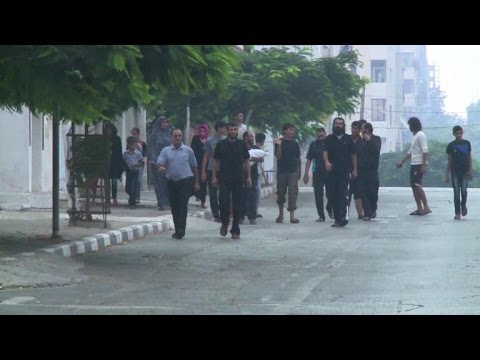 By Mohammed Suliman via al-Akhbar

“A massacre, a massacre!” were the words my brother, who works as a doctor at Gaza’s al-Shifa Hospital, said as he yelled over the phone urging me to come to Gaza’s main hospital immediately. “Come witness the massacre,” he said.

At first light, as I readied myself to go to the hospital, I heard knocks on my door. Three young men in tattered, seemingly burned clothes stood there. They asked me if I knew of any flats in the area they could rent. They were survivors of the yet unfinished massacre. “We’ve just fled from Shujayeh, there’s a massacre there,” they told me before they walked away.

On my way to al-Shifa, I saw scores of people roaming the streets, some barefoot, others weeping. They had fled the “Death Zone.” Drones were still buzzing overhead, warships shelled sporadically, and Israeli jet fighters roared intimidatingly before the roaring soon faded into the distance. But it all somehow felt so quiet.

I soon arrived at al-Shifa. Flabbergasted, I made my way through the crowds of people who had already gathered there seeking shelter with their families and children. Some lay on the ground, and others wailed the death of their children and relatives. Some stood by the morgue looking for their lost family members. These were some of the survivors of al-Shujayeh massacre.

“We were sitting at home after [breaking the fast] when suddenly shells started raining down on us,” 42-year-old Fatima al-Dib told Al-Akhbar. Fatima and her family hid under the stairs and were stranded for nearly 10 hours unable to escape while Israeli mortar shells fell on and around their house.

“There was a blazing fire outside,” Fatima, a mother of two boys and three girls, recalled the past night. “My daughter was injured, so we carried her and hid under the stairs. We stayed there all night long from 8:30 in the evening until 6:00 in the morning as we heard the Israeli artillery fire shells in our direction nonstop,” she told us tearfully, her daughter in her arms.

On their way out, Fatima saw houses left in ruins, glass shattered, corpses strewn on the sidewalks, some disfigured and others ripped apart. “They must have been trying to flee when they were killed… When I got to al-Shifa, I realized I have just survived a massacre,” Fatima commented.

On July 19, Israeli forces perpetrated a vicious massacre against residents of al-Shujayeh area, east of Gaza City. When night came, Israeli artillery intensified its bombardment of al-Shujayeh throughout the night. Ambulances and civil defense forces were prevented from entering the targeted areas to evacuate the dead and injured. Houses were destroyed with their residents trapped inside, and other houses burned all night long. Corpses were buried under the rubble, and the injured bled to death. Children screamed for their lives. More than 70 have been killed, and more than 250 others were injured, the vast majority of them civilians. Over half of them are women and children.

Abu Mohammed al-Helo and his family were some of the survivors. Abu Mohammed came to al-Shifa and was frenetically looking for his brother Jihad and his family. Neighbors told him that Jihad’s house was shelled but that he was still alive. “My brother and his family are trapped under the rubble,” he told us. “Neighbors say they heard them shouting for help as they escaped the area but couldn’t rescue them because of the strikes,” With tears welling up in his eyes, he walked away, looking for help.

As I stood by the morgue to meet some of the families of the victims, very few people came to see the corpses and identify their relatives. It was simply unclear who was dead and who was still alive. Some were also completely disfigured that it was impossible to identify them. Most of the families were either still stranded in Shujayeh or just unaware that their family members have been killed. They were instead waiting for them to join them at UNRWA schools where families sought shelter.

The International Committee of the Red Cross has come under fire for failing to intervene and rescue the injured and evacuate residents of al-Shujayeh whose calls went unanswered.

Ahmed Jindiyya lost his brother Mohammed after a missile landed on his house. He called the Red Cross, which told him they will come to their rescue but never really turned up. “We were at home when our neighbor’s house was bombed. We tried to escape but the shells soon hit our house,” Ahmed told Al-Akhbar.

“As the shells hit around us, I hugged my children and tried to calm them down. But the shelling got closer and closer, so we covered our heads with pillows and a mattress. Then a missile hit our house. Mohammed [Ahmed’s brother] got killed, and some others were injured”

An ambulance finally arrived, and the injured were picked up. Ahmed, whose family is comprised of five sons and three daughters, escaped with his family in the middle of the night. According to Ahmed, a family including women and children was running away ahead of them when a shell hit and killed them.

“We decided to hide by walking on the sidewalk close to the wall,” Ahmed narrated how he and his family barely escaped death as mortars fell near them. “My children were crying and we walked as fast as we could till we got to al-Shujayeh Square where ambulances picked us up.”

When they got to al-Shifa hospital, Ahmed was reunited with the rest of his family. He saw his dead brother for only a short time as bodies were being piled on top of each other as new ambulances arrived.

Hamada al-Ghafeer described his and his family’s survival as “a miracle.” As bombs fell down, he and his family hid under the stairs, broken glass showering over them. “I prayed that I’d die before my kids and not live to see them torn and burnt in front of my eyes,” 39-year-old Hamad said.

“They were bent on obliterating all of al-Shujayeh. I can’t believe we outlived this massacre. It’s a miracle, a rebirth.”