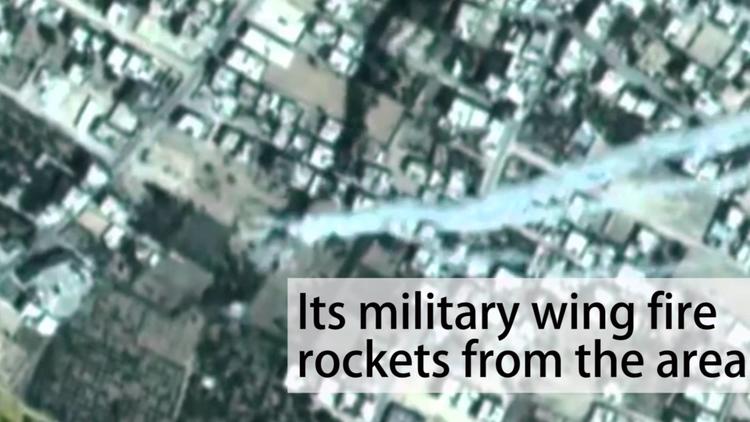 By United Nations Office for the Coordination of Humanitarian Affairs

• The Rafah area was subject to the heaviest shelling and fighting recorded since the start of the emergency, resulting in dozens of fatalities; many of the bodies could not yet be recovered or identified.

• The public health system is on the verge of collapse : while the number of casualties continues to grow, five hospitals and 34 clinics have shut down due to damage and insecurity.

• Up to 25 per cent of Gaza’s population may now be forcibly displaced, of whom 259,000 are hosted in UNRWA shelters alone .

• Lack of electricity and fuel shortages disrupt the functioning of hospitals and affect access to water for the entire population . The current lack of adequate water chlorination may have serious public health consequences.

66 Israelis killed, including 63 soldiers , two civilians and one foreign national

5 Hospitals have shut down due to insecurity

1.8 million People have reduced or no access to regular water and sanitation.

475 ,000 P eople may be displaced, staying in emergency shelters or with host families

Following yesterday’s collapse of a 72 – hour humanitarian cease-fire brokered by the UN and the USA, hostilities intensified . The Rafah area in southern Gaza was subject to the heaviest shelling and fighting recorded since the start of the emergency, as well as the advancement of Israeli forces westwards into the most densely populated areas. According to Israeli media reports, these developments took place in the context of the Israeli army’s attempts to locate a soldier missing in action and reported to have been captured.

Amid a massive increase in casualties, the single government hospital serving Rafah had to be evacuated and closed after it was hit by a projectile and unable to operate due to the hostilities. Prior to that, the hospital received anonymous calls warning of imminent attacks, causing major panic and chaos among patients and staff.

Similar calls were received at Shifa, Gaza’s largest hospital. The insecurity and lack of access affecting ambulance s and rescue teams remains a major concern. Yesterday, a n ambulance evacuating patients in Rafah was hit by tank fire, killing three paramedics. Despite coordination with the Israeli forces, Palestinian Red Crescent Society (PRCS) teams have been largely unable to operate in the Khuza’a town, east of Khan Younis, to retrieve bodies and potentially injured people from under the rubble , due to the fighting and access restrictions.

Since the last situation update, at least 86 persons have reportedly been killed and identified , the majority during bombardments in the Rafah area. However, some reports indicate that the total number of fatalities in Rafah alone may include as many as 136 people, many of whom could not yet be retrieved from under the rubble or their identity established . Many of these casualties ocurred yesterday in the morning hours, during the initial fighting and shelling, while they were in the streets, believing a ceasefire was in force. Other casualties fell during the targeting of homes: – Yesterday at approximately 23:00, an Israeli airstrike attacked the house of the Zoroub family, in a UNDP housing project in Rafah, killing at least 13 family members, including seven children and three women.

– Today at around 11:30, another airstrike targeted a two storey residential building located in Al Sabra neighbourhood of Gaza city , belonging to the Al Nyrab family, who lived there together with another four families . While members of the latter managed to escape, the owner of the building, along with his wife and three of their children, 8, 10 and 14 years old, were killed. Since the launch of the Israeli military operation, hundreds of homes have reportedly been directly targeted by Israeli airstrikes, and it is estimated that nearly 900 houses have been totally destroyed or severely damaged, causing civilian casualties, including multiple members of the same families.

Up to 30 July, at least 76 families have lost three or more family members in the same incident, for a total of 407 fatalities.

Such cases raise concerns about the targeting of civilians and civilian objects and the launching of indiscriminate attacks. This brings the cumulative death toll among Palestinians to at least 1,525 , according to preliminary data collected by the Protection Cluster from various sources, which includes 301 persons ( 20 per cent), who could not be identified or their status established . Of the fatalities whose identity and status could be verified (1,196 ), nearly 84 per cent ( 1,033 people) are believed to be civilians, including 329 children and 187 women, and 16 percent ( 191 ) members of armed groups.

Indiscriminate firing by Palestinian armed groups in Gaza into southern and central Israel continued, with most falling in open areas or intercepted by the Iron Dome system , resulting in no additional fatalities . Since 8 July, three civilians in Israel have been killed, including one foreign national, and dozen s directly injured by rockets or shrapnel.

The number of Israeli military fatalities remains at 63.

Thousands of residents from the eastern part of Rafah governorate fled westwards towards Rafah City and the coast, with many seeking refuge in UNRWA shelters. As of this afternoon, UNRWA was providing shelter to 259,321 in 90 schools throughout the Gaza Strip, 6,000 more than yesterday. This represents an average of over 2,800 IDPs per shelter, which normally have the capacity to accommodate only 500 people. Another 15,700 IDPs are residing in 19 government schools and other institutions and some 7,000 are reportedly seeking refuge in public building or informal shelters. The Ministry of Social Affairs ( MoSA ) estimates that the number of persons staying with host families throughout the Gaza Strip could be as many as 200,000. The total number of IDPs in Gaza is estimated at approximately 475,000 , which represent one quarter of the Gaza population.

Overcrowding at shelters is challenging the already stretched capacity to provide IDPs with basic necessities, maintain hygiene conditions, and prevent the outbreak of epidemics. While showers in shelters have improve d personal hygiene and decrease d the risk of spread of disease, an accelerated level of diarrhea has been reported among children. WHO and UNRWA are monitoring health in shelters in order to pre vent and control any outbreak of communicable disease. A strong mobilization of resources is required to meet the most urgent needs, particularly those stemming from the massive number of displaced persons and those arising from wide – scale damage to infrastructure.

But resources will mean little if the blockade on Gaza and the denial of Palestinian rights continue.

While the number of people injured over the course of hostilities continues growing rapidly , the public health system is nearing collapse. At least 12 hospitals have been damaged since the start of the Gaza emergency, of which five have had to shut down. Fourteen (14) primary health clinics also sustained damage and nearly half of all clinics in Gaza (34 out of 75) have closed, primarily due to insecurity, including all those located within the three kilometer buffer zone declared by Israel. Hospital are increasingly forced to discharge patients prematurely , to accommodate newer and most urgent cases, even though these patients often do not have a ny place to go to , let alone an adequate one.

Following the drastic reduction in electricity supply since 29 July, hospitals are now dependent, almost exclusively, on unreliable back – up generators as their main power source. Constant fluctuations in power supply have resulted in the malfunctioning of sensitive medical equipment, including ultrasound, X – ray, laboratory machines, cardiac monitors, sterilizing machines and infants’ incubators. The operation of hospitals is being further disrupted due to the constant inflow of IDPs into their facilities, who are seeking refuge, us ing the bathrooms, washing their clothes and other necessities. The functioning of, and access to obstetric services is of increasing concern. Nursing attendance in the maternity department of Shifa Hospital, the largest in the Gaza Strip, was reduced in the past days to 40 per cent. At the same time, the closure of Harazeen Maternity Hospital in the As Shuja’iyeh neighborhood of Gaza City, increased the number of women seeking delivery assistance at Shifa by around 25 per cent. It is feared that the recent closure of Shifa’s antenatal services for high – risk pregnancies may have an impact on fetal and maternal morbidity and mortality.

We are now looking at a health and humanitarian disaster, the fighting must stop immediately The Humanitarian Coordinator, James W. Rawley, 2 August

ensuring respect for the IHL principles of distinction, proportionality and precaution in attack.

Humanitarian space: increased access for humanitarian workers to carry out life – saving activities , for example , through regular and meaningful humanitarian pauses or corridors for the evacuation of the injured . This is needed among other reasons, to complete search and rescue operations in several areas, and repair critical water and electricity infrastructure.

Additional fuel supply : needed to operate backup generators at essential facilities, including water, sanitation and health, for longer hours. Scale up response to IDPs : additional shelters are needed to reduce overcrowding and accommodate new IDPs, alongside the replenishment of food, water and hygiene materials, and NFI stocks.

Assistance for IDPs living with host families also needs to be increased, particularly the provision of NFIs and water and hygiene kits.

• Child protection and psychosocial support is urgently required to address issues of child abuse, exploitation and violence inside shelters and refuges.

• Thousands of explosive remnants of war are left in civilian areas affected by conflict, causing a major threat to children.

This report is produced by OCHA oPt in collaboration with humanitarian partners. It covers the period from 1 August (15 00 h r s) to 2 August (1500 h r s). The next report will be issued on 3 August .

or donate To the Friends of UNRWA by Paypal for a US tax deduction at Ebay without making a purchase (see the “Donate” button on the right).