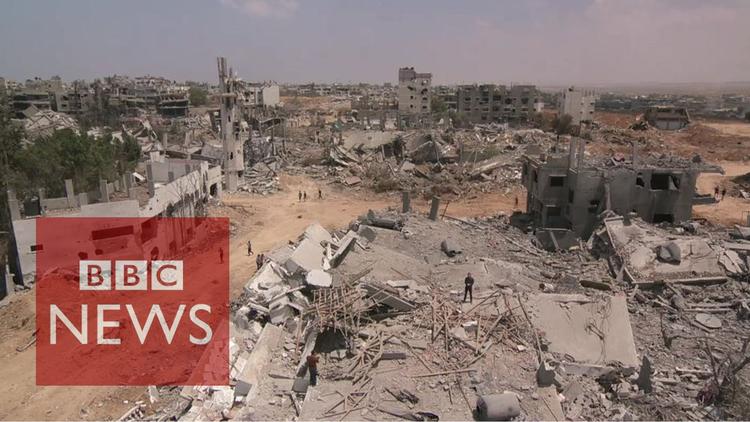 The Israeli government is saying that it will only let in building materials so that Palestinians in Gaza can rebuild or repair the some 40,000 buildings that have been damaged or destroyed if Hamas disarms.

It is legitimate for Israel to seek the disarming of Hamas, but it isn’t legitimate or legal in international law for it to hold non-combatants’ lives and welfare hostage in order to accomplish that goal.

Israel is the occupying Power in Gaza because it controls its land and sea borders and its air space, and decides policy for its inhabitants, such as whether they can export their made goods (the answer is no). I.e. it has effective control. Israelis sometimes attempt to escape the obligations of the occupier by saying that they “withdrew” in 2005. But that doesn’t change their status as occupier, and, indeed, the very fact of having sent 8,000 Israelis into Gaza where they attempted to usurp 40% of its land and a lion’s share of its water was a war crime. The Geneva Conventions don’t allow the occupier to transfer its own citizens to the militarily occupied territory! (Article 49: “The Occupying Power shall not deport or transfer parts of its own civilian population into the territory it occupies.”> So that they are no longer committing this crime is all very nice, but it doesn’t relieve them of their obligations as the occupying Power.

In the Geneva convention of 1949 on the treatment of occupied populations by the military occupier, civilian non-combatants are called “protected persons”:

No protected person may be punished for an offence he or she has not personally committed. Collective penalties and likewise all measures of intimidation or of terrorism are prohibited.

Reprisals against protected persons and their property are prohibited.”

So Gaza civilians cannot be denied building materials because somebody else fired a flying pipe bomb into the Israeli desert. The noncombatants don’t bear a personal responsibility for those little rockets.

This article 33 was put in because the world was appalled by Nazi crimes of collective punishment.

That is why the Israeli blockade of the civilians of Gaza since 2007 is and has all along been a war crime, contravening the Geneva Conventions.

Using the children they just made homeless as a bargaining chip in a bid to disarm Hamas is not only illegal, it is also heartless.