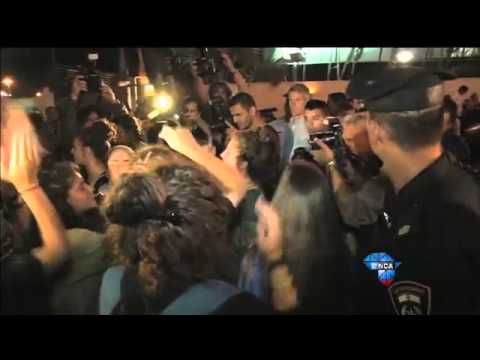 An Israeli crowd gathered outside the wedding of a Muslim man and a Jewish woman in Rishon Lezion, shouting “death to Arabs” on Sunday. They were from the far right Lehava group, and make a specialty of harassing couples in mixed marriages. They called Maral Malka, 23, a traitor for converting to Islam and marrying Mahmoud Mansour, 26. Both hail from Jaffa. Ms. Malka’s father, Yoram, opposed the marriage as well, and said that he had a problem with his new son-in-law because he is “an Arab.” (It is interesting that he used a racial rather than a religious epithet). Israel’s recently-elected president, Reuven Rivlin, denounced the protest as “outrageous.”

Religiously mixed marriages are not permitted in Israeli law, though they are recognized if conducted abroad and then the bride and groom return. Often couples fly to Cyprus for a marriage and honeymoon if they hail from different faiths but are Israeli citizens. An average of 20,000 Israelis get married in Cyprus every year, about 60% of them ineligible for marriage by the rabbinate. For others, going to Cyprus or the Czech Republic functions like an elopement, to avoid having to throw a huge wedding party. Some Palestinian-Israelis, one a Muslim and the other a Christian, also have to tie the knot abroad because their religious authorities won’t marry them. Israeli personal status law, like that in Lebanon and Egypt, is governed by the individual’s religious community.

This marriage could be conducted in Israel because Ms. Malka converted.

I remember when I was an early teen that it was still illegal for European-Americans and African-Americans to marry in Virginia.