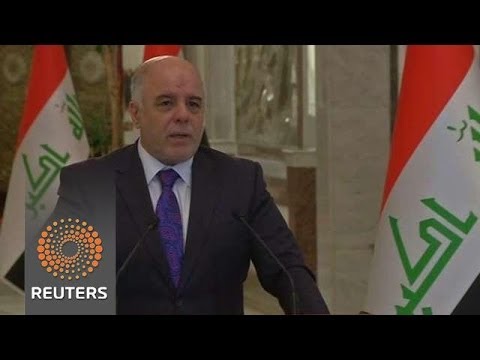 In Baghdad [last] week, Iraq’s most senior Shiite Muslim politicians are lamenting their increasing isolation from the international community. The EU and the US are bypassing Baghdad to support Iraq’s Kurdish forces militarily; they’re also holding meetings with Iraq’s Sunni Muslim leaders and have apparently promised to support more Sunni independence. Is this the beginning of the end of a united Iraq?

At a meeting . . . that gathered senior leaders from Iraq’s Shiite Muslim political scene, one man turned to another and whispered in his ear: “So it seems we will not be ruling all of Iraq ever again. We will have Baghdad and our Shiite cities in the south, but nothing else”.

Almost everyone who attended the meeting – NIQASH was told about it by the whispering politician, who did not wish to be identified – was thinking the same thing. A short discussion on this exact topic followed but it was very negative in tone, and downright pessimistic about the future. This was then followed by conversations about how to distribute the country’s ministries among elected politicians. The subject of how the Shiites of Iraq had lost the country was not revisited.

Many of the politicians believe that a decision has been made by the international community. Over the past eight years foreign allies had always supported the Shiite Muslim politicians of Iraq. But this group has failed to rule the country well and unite its people. So the international community has decided to support the other major players in Iraq, the country’s Sunni Muslims and the Kurds.

In an exclusive interview with the New York Times published August 9, US President Barack Obama said that, “a residual US troop presence would never have been needed [in Iraq] had the Shiite majority there not “squandered an opportunity” to share power with Sunnis and Kurds.”

“Had the Shia majority seized the opportunity to reach out to the Sunnis and the Kurds in a more effective way, [and not] passed legislation like de-Baathification,” no outside troops would have been necessary,” the story said. “Absent their will to do that, our troops sooner or later would have been caught in the crossfire, [the President] argued.”

This was seen as an ominous sign by Shiite Muslim politicians as were several other very clear indicators that the international community no longer trusts the country’s Shiite Muslim parties to make the best decisions.

For example, Iraq’s foreign allies are communicating directly with other sectors of the Iraqi population, bypassing Baghdad.

The most obvious example is the US decision to launch air strikes in support of the country’s semi-autonomous Iraqi Kurdish region, against the Sunni Muslim extremist group known as the Islamic State. In previous months, there had been no such support from the US when members of the same extremist group took part in ejecting the Iraqi army from provinces like Anbar – and even when the group took control of the northern city of Mosul in early June. The June takeover has led directly to the threats made against the nearby Iraqi Kurdish region.

Over the last few weeks there has been more and more talk from both the US and the European Union about directly arming Iraq’s Kurdish as well as directly supporting them militarily.

The European Union foreign affairs council released a statement after members met in Brussels on August 15 saying that it welcomed “the decision by individual Member States to respond positively to the call by the Kurdish regional authorities to provide urgently military material”.

Back in Baghdad, senior Shiite Muslim politicians expressed surprise at the enthusiasm of the international community for supporting the Iraqi Kurdish military, while Iraqi army forces fighting Sunni Muslim extremists north and south of Baghdad, as well as in the provinces of Diyala and Samarra were ignored.

The international reactions seem to have been something of a wakeup call for some of these politicians, who apparently had not realised that Iraq was on the verge of a whole new political scenario. As the President of the Iraqi Kurdish region has noted before, the Iraq “before Mosul” and “after Mosul” is a different country; he is referring to June 10, when the Islamic State, or IS, group took control of the northern city.

A statement was even issued by the office of the Commander in Chief of the Iraqi Armed Forces in Baghdad – that job is currently occupied by al-Maliki. It was released to the Iraqi media and said that while the Office welcomed international support, those providing it should carefully consider Iraq’s sovereignty. The statement warned against the distribution of military equipment without the consent or knowledge of the government in Baghdad.

Iraqi Kurdistan is important to the US for many reasons. Barack Obama said that part of the reason for launching air strikes was to protect US staff inside the region – the US has a consulate there as do many other countries. Because Iraqi Kurdistan has been the safest part of Iraq for years now, it is a base for many of the foreign firms and NGOs working in the country.

As a result of the last couple of month’s fighting, Iraqi Kurdistan has also become a shelter for over an estimated million refugees, both from inside Iraq and from Syria.

Additionally, the government in Baghdad had cut off funding and military aid to Iraqi Kurdistan several months ago, over budget and oil industry disputes. As a result, IS fighters had been able to come dangerously close to Erbil, the capital of Iraqi Kurdistan – despite the region’s own military, who appeared to be under armed and under-resourced.

When arms shipments arrived in Iraqi Kurdistan from the US and the European Union this month, it was yet another sign that the international community were ignoring the political leadership in Baghdad and going straight to the Iraqi Kurdish.

“We are holding meetings on an ongoing basis with US officials to discuss the political and security situation in Sunni Muslim-majority provinces, particularly Anbar,” Saleh al-Issawi, deputy head of Anbar’s provincial council, told NIQASH. “We have asked the US to help us not to repeat what happened during al-Maliki’s regime. And we have told them that we have the power to manage our own cities’ affairs, both in terms of administration and security. We told them that we want to form our own military in Anbar and in other Sunni Muslim areas so that we can protect ourselves in the same way that the Iraqi Kurdish military protect Iraqi Kurdistan.”

“The US has agreed with us,” al-Issawi told NIQASH. “They have promised to support Iraq’s Sunnis and help us to avoid the previous experience with the Shiite Muslim-led government in Baghdad which was ignoring and oppressing us.”

Al-Issawi says that the US has agreed to help train and arm a new Sunni Muslim military force without coordinating with Baghdad.

“Meetings between the US and Sunni Muslims and the Kurdish are still going on,” a senior Iraqi Kurdish politician, who did not wish to be identified, told NIQASH. “They are discussing how to solve the conflicts that exist between Iraq’s Sunni, Shiite and Kurdish populations.”

“How Iraq is being run is changing,” the official alleged. “There hasn’t been any kind of official decision but informally it seems to have been agreed that Iraq’s provinces should have more independence. The government in Baghdad won’t be able to interfere in provincial affairs.”

Also worth remembering is the country’s increasingly important Law 21 – amendments to it were passed in the middle of last year – which legally gives Iraq’s provinces more power and independence from Baghdad. But the same old questions remain: will the Iraqi Kurds and the country’s Sunni Muslims trust the new Shiite Muslim-led government with this law, after the previous Shiite Muslim-led government managed to ignore it completely? And have the demands of Iraq’s Kurds and Sunnis changed “after Mosul” – are these now greater than Law 21 can address?

In a recent interview Jay Garner, a retired US army general who headed the occupation of Iraq first, after 2003, told British newspaper The Guardian, that, “the Iraq that we knew no longer exists.”

The “very best” that can be hoped for now, Garner, a long-time supporter of the Kurdish region, told the Guardian, “is a confederation, a federal system of Sunnis, Kurds, Shia. I think Iraq is now partitioned and we ought to accept that”.