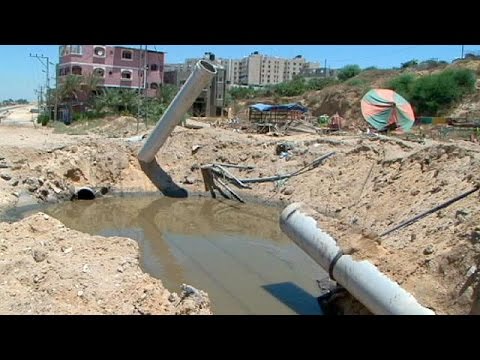 GAZA CITY (Ma’an) — The Palestinian Water Authority said on Thursday that the water distribution network in Gaza had suffered $34.4 million worth of damage as a result of the Israeli offensive over the last five weeks, including dozens of destroyed facilities.

The immense scale of the destruction of Gaza’s infrastructure has only become increasingly apparent over the last two weeks, as a relative calm due to back-to-back temporary ceasefire has allowed authorities to survey the damage.

$9 million worth of damages, meanwhile, were caused to water services vehicles and machinery.

The water network would also require some $32.6 million worth of emergency supplies to cover the Strip’s water needs for the next six months, the authority added, highlighting that because of the damage sustained by an Israeli airstrike on the territory’s sole power plant, fuel for the water network was an urgent concern.

The Gaza water sector needs $620 million worth to develop water services and facilities, the authority estimated in the statement, of which $240 million had already been provided for by donors for water desalination, sewage treatment projects and other short- and medium-term projects.