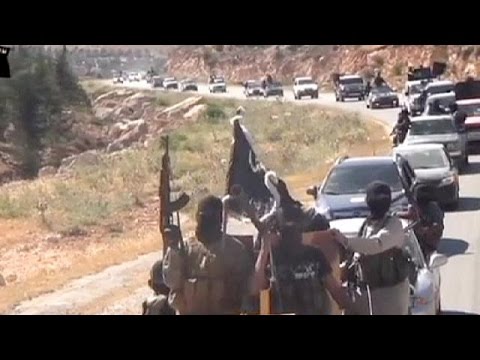 By Glenn Kates via RFE/RL

Thousands of social-media users were unwittingly exposed to horrifying images of James Foley’s execution in the hours after Islamic State (IS) militants posted video of his beheading online.

It was exhibit A in the extremist group’s two-pronged propaganda campaign: inflict fear in the West while using the same imagery to inspire and recruit radicals from around the world.

But since the video first appeared on August 19, major companies like Twitter and YouTube have increased their efforts to take down offensive material and remove accounts linked to terrorist groups. IS, though, appears to be adapting to the shutdowns by moving to open-source and more decentralized social networks that are difficult to regulate and also experimenting with other tools that are less popular in the West.

“It would be bizarre to imagine that just because Facebook or Twitter was slightly more difficult for them to use they would stop communicating with each other or spreading their message,” says Jamie Bartlett, author of “The Dark Net,” a new book about hidden online communities. “It’s in keeping with the modus operandi both of what we know about terrorist organizations and what we would expect any organization to do when they think their message is being unfairly censored.”

According to the Vocativ news site, an official IS forum has laid out a five-point plan to fight the account suspensions, which includes building its own servers and redirecting supporters to platforms besides Twitter and Facebook. It also suggested hacking Western TV channels.

Diaspora, a social network whose servers are distributed among a network of “podmins” rather than centralized, confirmed shortly after the Twitter and YouTube clampdown that IS supporters had begun moving to its platform.

The nonprofit expressed concern but said removing the content would be more difficult than it is for traditional social networks.

“Anyone is able to use Diaspora’s software in any way they choose,” the company said in a statement. “We cannot therefore prevent anyone from using the software; we are also not able to influence the decisions of podmins.”

But it also said that “larger” pods had already removed IS-related accounts and posts and a follow-up statement said “all of the most active accounts” had been closed.

On Vkontakte, a social network that is more popular than Facebook in Russia and some Russian-speaking countries of the former Soviet Union, an account set up earlier this month began posting updates shortly after the video of Foley — who had been missing for almost two years — appeared online.

IS has as many as 80,000 members in Iraq and Syria, according to the Syrian Observatory for Human Rights, with tens of thousands allegedly recruited from abroad. The Sunni-Islamist group, which now controls major cities in the two countries and seeks to create an Islamic Caliphate, has committed mass executions against Shi’ite Muslims and religious minorities in territory it has conquered.

The page on VKontakte violates the site’s own rules on extremism and may itself be taken down soon, but Bartlett, who also directs the London-based Centre for the Analysis of Social Media, says that in the long-term the group will continue to find ways to skirt censors — particularly as tools meant to protect online privacy gain traction.

As concern over government and corporate access to user data has grown in the West, so too has investment in technologies that put online privacy and Internet freedom at a premium. Internet censorship circumvention tools that aid IS can also benefit online activists and dissidents in authoritarian countries that punish dissent.

“The people who make these platforms are fully aware that they’re constantly faced with this dilemma,” says Bartlett. Generally though, “they’re willing to accept all the terrible awful propaganda if it also means that people can speak freely.”