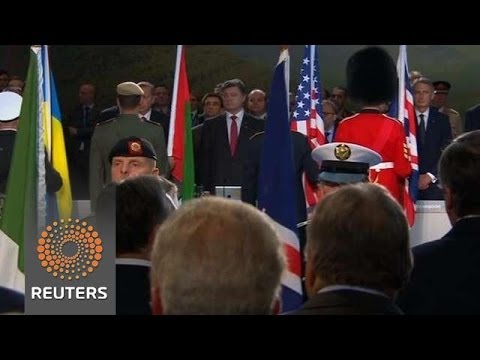 The NATO summit in Wales was supposed to be all about getting out of Afghanistan. Instead, two new issues dominated it– the Ukraine and ISIL in Iraq and Syria.

British prime minister David Cameron joined Barack Obama in castigating NATO members for paying ransoms to ISIL and for not stepping up to deal with it. Cameron is said to be canvassing his backbenchers in parliament about whether they would accept a Royal Air Force role in bombing ISIL positions in Iraq. He has to do this because last year this time the British parliament shot down any British role in bombing Syria in response to the Bashar al-Assad regime’s use of poison gas. Parliament’s reluctance played a role in forestalling an Obama intervention in Syria.

Cameron and Obama expect Haydar al-Abadi to form a government of national unity in Iraq within the next few days. At that point, they expect al-Abadi formally to invite Western air power into the country to combat ISIL, which has taken 40% of the country.

Germany has already been prevailed upon to send some military equipment to the Kurdistan paramilitary, the Peshmerga. Other NATO members may well offer military aid to the Iraqi army.

The big question is Syria. As I argued yesterday, there are important questions about whether a Syrian intervention would comport with international law. While this consideration is not important in the United States, the European Union states have incorporated much international law into EU legal codes, and leaders who infringe against it could find themselves in court.

My reading of the reporting from Wales is that most NATO states have little intention of intervening directly in Iraq and most of them have no intention to get involved in Syria. The US and Britain (and, far from Europe, Australia) are the most likely to commit to the Iraq front. The NATO country closest to ISIL territory, Turkey, seems reluctant to get involved in directly fighting ISIL (and critics of the religious Right party, AKP, which is in power, suggest that behind the scenes President Tayyip Erdogan is supporting the hard core Muslim rebels in Syria.

Despite all the vehement talk, the US likely will have few allies in the air in Iraq as President Obama seems to be stampeded (by the Washington hawks and fear of losing the midterms for looking weak) into a wide-ranging new Iraq war that seems likely to spill over into Syria.

The biggest problem the US faces, however, is the lack of effective allies on the ground in Iraq. The ragtag assemblage of radical Shiite militias, Iranian advisers, Kurdistan paramilitary and regular Iraqi army troops that broke the siege of Amerli then went on to attempt to take Tikrit from ISIL. They fairly quickly failed in this further campaign. Apparently it is important to them to fight for a grateful Shiite population, but they don’t do nearly as well when fighting ISIL in Sunni Arab areas. But the latter is the ultimate objective. Air power can’t do the job, you need effective troops on the ground. Where will Mr. Obama find them?