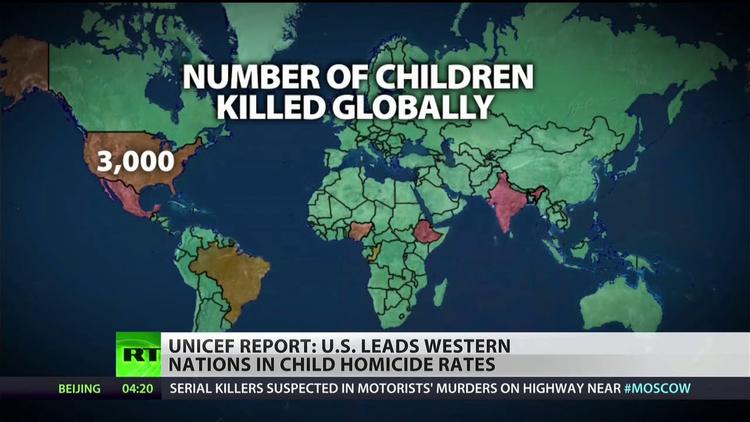 RT America: “America leads all Western nations in the number of child homicide victims, according to a new report from UNICEF. In 2012, there were four adolescent homicides per 100,000 people in the US, which is on par with the child death toll in Iraq. RT’s Ameera David takes a look at the troubling figures.”

NEW YORK – The largest-ever compilation of data on violence against children shows the staggering extent of physical, sexual and emotional abuse — and reveals the attitudes that perpetuate and justify violence, keeping it ‘hidden in plain sight’ in every country and community in the world.

“These are uncomfortable facts — no government or parent will want to see them,” said UNICEF Executive Director Anthony Lake. “But unless we confront the reality each infuriating statistic represents — the life of a child whose right to a safe, protected childhood has been violated — we will never change the mind-set that violence against children is normal and permissible. It is neither. “

The UNICEF report Hidden in Plain Sight draws on data from 190 countries, documenting violence in places where children should be safe: their communities, schools and homes. It details the lasting, often inter-generational effects of violence, finding that exposed children are more likely to become unemployed, live in poverty and be violent towards others. The authors note that the data is derived only from individuals who were able and willing to respond, and therefore represent minimum estimates.

• Sexual violence: Around 120 million girls under the age of 20 worldwide (about 1 in 10) have experienced forced intercourse or other forced sexual acts, and one in 3 ever-married adolescent girls aged 15 to 19 (84 million) have been victims of emotional, physical or sexual violence committed by their husbands or partners. The prevalence of partner violence is 70 per cent or higher in the Democratic Republic of the Congo and Equatorial Guinea, and approaches or exceeds 50 per cent in Uganda, the United Republic of Tanzania and Zimbabwe. In Switzerland, a 2009 national survey of girls and boys aged 15 to 17 found that 22 per cent and 8 per cent, respectively, had experienced at least one incident of sexual violence involving physical contact. The most common form of sexual violence for both sexes was cyber-victimization.

• Homicide: One fifth of homicide victims globally are children and adolescents under the age of 20, resulting in about 95,000 deaths in 2012. Homicide is the leading cause of death among males between 10 and 19 years old in Panama, Venezuela, El Salvador, Trinidad and Tobago, Brazil, Guatemala and Colombia. Nigeria has the highest number of child homicides – 13,000. Among countries in Western Europe and North America, the United States has the highest homicide rate.

• Bullying: Slightly more than 1 in 3 students between the ages of 13 and 15 worldwide are regularly bullied in school; in Samoa, the proportion is almost 3 in 4. Almost a third of students 11 to 15 years old in Europe and North America report bullying others – in Latvia and Romania, nearly 6 in 10 admit to bullying others.

• Attitudes towards violence: Close to half of all adolescent girls aged 15 to 19 (around 126 million) believe a husband is justified in hitting his wife under certain circumstances. The proportion rises to 80 per cent or more in Afghanistan, Guinea, Jordan, Mali and Timor-Leste. In 28 of 60 countries with data on both sexes, a larger proportion of girls than boys believe that wife-beating is sometimes justified. In Cambodia, Mongolia, Pakistan, Rwanda and Senegal, girls are around twice as likely as boys to think a husband is sometimes justified in hitting his wife. Data from 30 countries suggest that about seven in 10 girls 15-19 years old who had been victims of physical and/or sexual abuse had never sought help: many said they did not think it was abuse or did not see it as a problem.

UNICEF points to six strategies to enable society as a whole, from families to governments, to prevent and reduce violence against children. They include supporting parents and equipping children with life skills; changing attitudes; strengthening judicial, criminal and social systems and services; and generating evidence and awareness about violence and its human and socio-economic costs, in order to change attitudes and norms.

“Violence against children occurs every day, everywhere. And while it harms individual children the most, it also tears at the fabric of society — undermining stability and progress. But violence against children is not inevitable. It is preventable — if we refuse to let violence remain in the shadows,” Lake said. “The evidence in this report compels us to act — for the sake of those individual children and the future strength of societies around the world.”