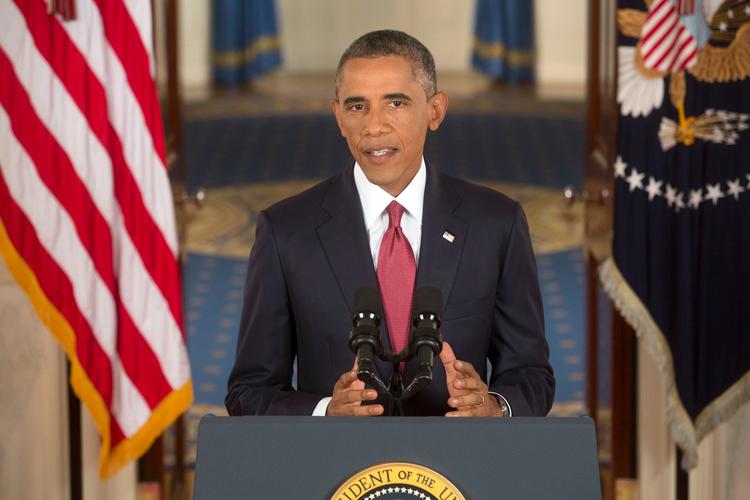 President Obama’s speech launching his war on ISIL avoided the qualifications that he had earlier made, which had produced caviling inside the Beltway from politicians who confuse careless belligerency with decisiveness.

From a language of containing ISIL, he was forced to speak of degrading and destroying it. He went back and forth between trying to reassure the left wing of the Democratic Party that he had not suddenly been possessed by the ghost of Dick Cheney and assuring the skittish American people that he was going to make mincemeat of the terrorist American-beheaders.

Analysts will focus on his four-step program of fighting ISIL, but it is in the president’s analogies to his present battle that we find clues to what he really expects to happen. He says that this is not a war as Iraq and Afghanistan were wars, i.e. with the commitment of several divisions of conventional US ground troops. He cautioned:

“But I want the American people to understand how this effort will be different from the wars in Iraq and Afghanistan. It will not involve American combat troops fighting on foreign soil. This counterterrorism campaign will be waged through a steady, relentless effort to take out ISIL wherever they exist, using our air power and our support for partner forces on the ground. This strategy of taking out terrorists who threaten us, while supporting partners on the front lines, is one that we have successfully pursued in Yemen and Somalia for years.”

Invoking Yemen and Somalia is a signal of minimalism in every way. On MSNBC, veteran, experienced and brilliant correspondent Richard Engel took apart this analogy. He pointed out that Yemen and Somalia are holding actions but that in Iraq the US and its allies would have to take territory.

But what if Obama is talking big but carrying a soft stick? What if he really does mean he has a Yemen-like situation in mind?

What if Obama wants to prevent the fall of Baghdad, Erbil and even Riyadh? What if he is privately skeptical about Baghdad recovering Mosul any time soon? He has after all used drones in Waziristan in northwest Pakistan not to inflict military defeat but for tactical advantage. Iraq and Syria are the new Waziristan.

Yemen is of course a mess. In the north you have a Zaidi Shiite rebellion, the Houthis, who recently have threatened the capital, Sanaa. In the south you have secessionists of various stripes, some nationalists and some fundamentalists. On the Red Sea coast you have Sufis and some Salafi fundamentalists, the latter shading at one end of the spectrum into al-Qaeda. You also have al-Qaeda in the Arabian Peninsuala (AQAP) in the south and east. A third of Yemenis go to bed hungry every night. The country suffers from lack of water. Oil exports are limited. It is the poorest Arabic-speaking country. US air strikes and drones have arguably alienated and radicalized more Yemenis than they have killed al-Qaeda members.

The best that can be said for US actions against AQAP in Yemen is that they may have forestalled AQAP and kindred groups from taking and holding some provinces. For instance, AQAP took over Zinjibar and some other towns in Abyan Province in 2011, but in 2012 a government offensive backed by US air power and aided by grassroots anti-al-Qaeda popular committees expelled AQAP from Abyan.

True, AQAP relocated east to Hadramawt, and it still kills Yemeni soldiers, but it is farther from Sanaa now and it really did lose Abyan province, which it had hoped to make a caliphate.

Obama hinted in his speech that he wants to help Baghdad and Erbil take back towns from ISIL just as Abed Rabbo Mansour Hadi, the president of Yemen, took back Zinjibar. And just as AQAP hasn’t disappeared in Yemen, Obama expects ISIL to be around for a while. In essence, the Yemen policy has de facto yielded a sort of containment with regard to AQAP, though how successful it will be in the long run can be questioned.

What if Obama is a sharper reader of the Middle East than his critics give him credit for? He knows ISIL is likely not going away, just as, after 13 years, the Taliban have not. US military action may even prolong the lifetime of these groups (that is one argument about AQAP) even as it keeps them from taking more territory.

Don’t listen to his expansive four-stage program or his retooled, stage-managed John Wayne rhetoric. Look at his metaphors. He is telling those who have ears to hear that he is pulling a Yemen in Iraq and Syria. He knows very well what that implies. It is a sort of desultory, staccato containment from the air with a variety of grassroots and governmental forces joining in. Yemen is widely regarded as a failure, but perhaps it is only not a success. And perhaps that is all Obama can realistically hope for.

The White House: “President Obama Addresses the Nation on the ISIL Threat”