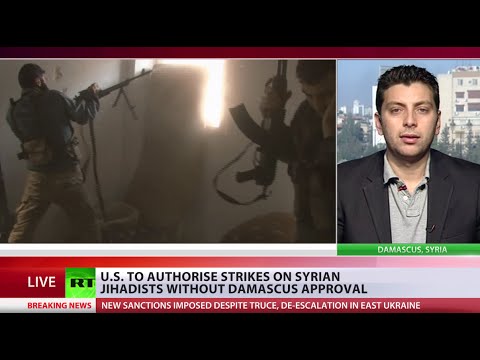 Russia on Thursday pushed back against President Obama’s state plans for taking on the so-called Islamic State in Iraq and the Levant (ISIL or ISIS) in Syria.

Russian Foreign Ministry spokesman Alexander Lukashevich remarked on television: “The US president has spoken directly about the possibility of strikes by the US armed forces against ISIL positions in Syria without the consent of the legitimate government,” “This step, in the absence of a UN Security Council decision, would be an act of aggression, a gross violation of international law.”

The Russian ambassador to the United States, Vitaly Churkin insisted that the Syrian government would have to give its consent, otherwise the operation to bomb ISIL in Syria “will complicate international operations and will pose problems for Russia as well as for many other countries respecting international law, including China. . . Respect for international law is necessary so that the international community is able to take consolidated actions on a problem as complicated as this one and if it [the US] opts for such actions, its choice will be highly regrettable and will create obstacles for further cooperation…”

Russia is divided over the new US initiative. It is desperately afraid of ISIL (in which Chechen fighters serve) and happy enough that the US had decided to intervene against it. But it doesn’t want the US overthrowing Bashar al-Assad and trying to turn Syria into a US sphere of influence.

Britain’s government is divided over the international legality of any bombing raids on Syria. Foreign Minister Philip Hammond had ruled out British air strikes on that country but Prime Minister David Cameron says that they are still on the table.

For my overview of the legal issues, see this blog entry

ISIL in Iraq is unambiguous, and there the Obama administration has Russia and Iran as behind the scenes allies in defeating the terrorist organization. ISIL in Syria is also opposed by Russia and Iran, but they want the Baath regime of Bashar al-Assad to be the beneficiary of ISIL’s defeat. The Obama administration imagines that there is still a “moderate” opposition that it can back against both ISIL and al-Assad.

In essence then, in Iraq the outside great powers are on the same page. But in Syria, the Obama administration is setting up a future proxy war between itself and Russia once ISIL is defeated (if it can be), not so dissimilar from the Reagan proxy war in Afghanistan, which helped created al-Qaeda and led indirectly to the 9/11 attacks on the US. Obama had earlier argued against arming Syrian factions. My guess is that Saudi Arabia and other US allies in the region made tangible backing for the Free Syrian Army on Obama’s part a quid pro quo for joining in the fight against ISIL.

In Jedda, US Secretary of State John Kerry said that if the situation in Crimea and Eastern Ukraine were not so tragic, Russian expressions of concern over international law in Syria would be laughable. Kerry secured support for the US push against ISIL from 10 Middle Eastern countries in Jedda, though it remains to be seen whether this resolution is more than lip service.

RT: “US strikes, intervention against ISIS in Syria could turn against army’