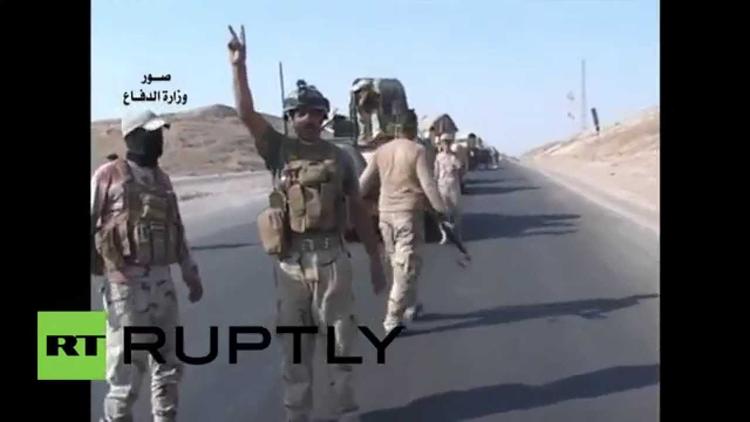 Mosul locals were invited to witness the city’s first death by stoning late last week – extremists who had taken over the city in early June had sentenced a man to death for adultery. Eyewitnesses say the event was shocking. And many in Mosul expect more of the same; they believe the extremists are trying to distract them from recent defeats.

An open invitation had been issued by the bearded gunmen roaming the streets of the Bab Al Sham neighbourhood in the northern Iraqi city of Mosul: Come and watch the first death by stoning in this town, they said.

Mosul was taken over by Sunni Muslim extremists from the group now known as the Islamic State in early June, when Iraqi army forces fled the metropolis. Since then the extremists have established their own set of rules and their version of strict religious law.

And late last week the group’s gunmen had been inviting everyone who passed by them in the Bab Al Sham neighbourhood in Mosul to come and watch some of their “justice” in action. At first local man Abdallah says he had not taken them seriously. But the 36-year-old who cannot give his full name for security reasons was curious. And soon he saw some members of the extremist group collecting stones in a yard, near a main street that was crowded with people.

Abdallah told NIQASH the stoning was the worst thing he had ever seen in his life. “I was told to sit down and there were hundreds of other people doing the same thing, waiting for the Iqamat al-Had [the application of Islamic law]. A circle was formed and there were a lot of masked gunmen around,” he describes the scene.

“While we were watching the militants moving around, collecting stones and organizing seating for everyone, two of the masked men dragged a young, blind folded man in behind them,” Abadallah continues. “He was pleading for mercy and yelling loudly and everyone could hear him screaming. After stoning him they hit him with one big rock and killed him.”

“The people of Mosul have grown used to the extremist group’s methods,” says one of the city’s Muslim clerics, who is now living in Dohuk after fleeing Mosul. “They announce their crimes before they commit them, as they did when they destroyed various shrines in the city and when they chased the Christians out of the city.”

“Executions of those who are sentenced to death by the extremists’ judges have usually been kept secret though,” explains the cleric whose name must remain anonymous for security reasons. “The Had is usually carried out in an unknown place and the corpse is only returned afterwards. After that, the extremists call the family’s victim so they can come and get the body.”

“But now,” the cleric tells NIQASH, “things seem to be different. The extremists have announced that they will start applying the religious verdicts in public. Basically they are doing this to terrorise the people of the city and force them to obey their orders.”

One of the worst penalties is being stoned to death. In this case, the victim was a young man named Marwan.

“The young man was brought into the middle of the yard and his hands and feet were tied,” Abdallah describes the scene. “A preacher started to say that this married man had committed adultery and that’s why he was being punished. It is the responsibility of the guardian of the Muslims to punish him, he said – and by that, he means Abu Bakr al-Baghdadi,” Abdallah explains.

“The young man began crying and shouting,” Abdallah continued. “But the preacher kept calling out “Allahu Akbar” and people were repeating it so loudly that by the end, you couldn’t hear the young man’s voice any more. He was trying to untie his hands and legs but one of the gunmen came closer to him and stopped him.”

The story of the terrible event spread around the city quickly. People were talking about how the gunmen were throwing rocks at the young man’s head with all their strength.

After about 20 minutes, it was all over. Everything was still except for the blood pooling underneath the young man’s head. The preacher took the young man’s pulse and made a sign to the gunmen that they could leave; the man was dead. SUVs carrying black flags started to depart while songs of victory were played on their car stereos.

One of the Islamic State group’s members had filmed the whole thing, from start to finish. No doubt the footage would later be disseminated online both to terrorize those who opposed the IS group and appeal to those who the group is trying to recruit.

The young man’s body was then transported by ambulance to Mosul’s morgue. NIQASH spoke to some of the employees there. They’re used to seeing dead people but even they were surprised at the severity of the injuries to the man’s head and face.

“He suffered a lot before his death,” one of them said sadly.

The people of Mosul have been discussing this incident a lot. It came at the same time as changes in the security situation in the province of Ninawa and many believe that the IS group’s leaders are just trying to distract them from defeats the IS group have suffered at, for example, the Mosul Dam and in towns on the Ninawa Plain, as the US continues to bomb strongholds from the air and the Iraqi and Kurdish forces attack on the ground.

It has also made the people of Mosul sure that this will not be the last savagery they will see from the IS group in coming days. They fear that soon they will start seeing people hanged on power poles, appendages amputated and crucifixions in the so-called Caliphate.

RuptlyTV: “Iraq: Army celebrates victory over IS in Anjana”