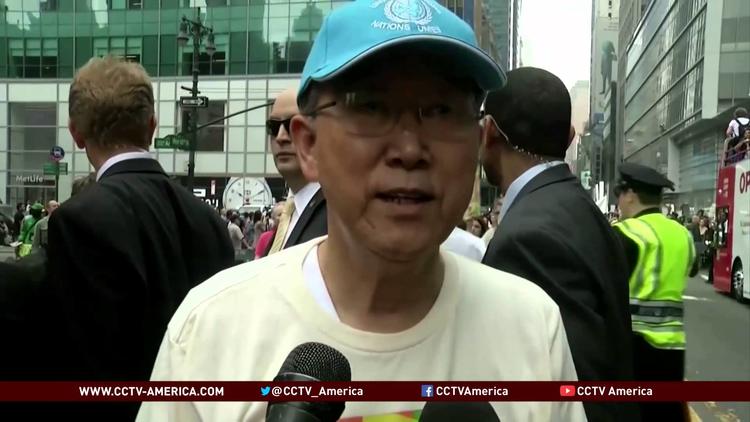 Global mobilization is exceeding expectations on Sunday, with hundreds of thousands of people taking to the streets demanding action on climate change on the eve of the UN Climate Summit. In addition to the massive action in New York City, People’s Climate demonstrations took place in cities and towns across continents, from rural villages to major urban centers.

According to a press release sent out by 350.org and the global civic organization Avaaz, people in more than 156 countries joined 2646 events and rallies—in India, Tanzania, South Africa, Brazil, Germany, and Taiwan, among many others—in solidarity with the People’s Climate March happening in Manhattan on Sunday.

“We’re starting today in New York with already thousands upon thousands of people having marched around the world,” 350.org global communications director Hoda Baraka told Common Dreams, pointing to sizable events in Melbourne and Jakarta. “There’s so much happening at the same time, it’s quite breathtaking and moving and powerful, to be honest. It is, at the end of the day, a global moment. It’s a global issue. All these different constituencies coming together for climate action—that’s a really a very important and telling turning point for the climate movement.”

A particularly urgent call came from the Pacific Islands, which given its elevation above sea level, is at the frontlines of the fight against climate change. There, from Tonga to Tuvalu to Tokelau, people rallied calling for ‘Action, Not Words,’ to protect their homes and livelihoods. In rural Papua New Guinea, students from a primary school marched to a nearby lighthouse, which has recently become semi-submerged due to rising sea levels.

“We’re not waiting for politicians to move,” said Seia Mikaele Maiava, Pacific Climate Warrior from Tokelau. “This is a matter of survival for us. We’re not drowning, we’re standing up and fighting for our homes.”

Organizers see Sunday’s demonstrations as just the beginning of a series of actions that will continue in the lead up to the 2015 United Nations Conference on Climate Change in Paris. For example, people all across the Pacific are preparing to send 30 Pacific Climate Warriors with their canoes to block the world’s largest coal port in Australia in October. A global day of action against fracking is also planned for next month.

“With hundreds of thousands marching in more than 2,500 protests worldwide, this is by a long way the largest climate mobilization in history,” said Ricken Patel, executive director of Avaaz, in a statement. “It’s a wake up call to politicians that climate change is not a green issue anymore, it’s an everybody issue. The public has heard our scientists that everything we love is under threat, and we’re prepared to fight for the only solution—a world powered by 100 percent safe, clean, sustainable energy.”

This work is licensed under a Creative Commons Attribution-Share Alike 3.0 License
Commondreams.org