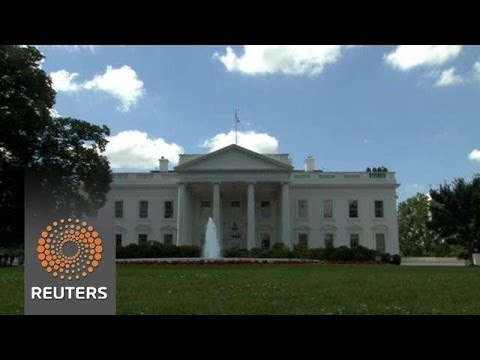 (Erbil) – The Iraqi government should promptly investigate an airstrike that hit a school housing displaced people near Tikrit on September 1, 2014. The attack killed at least 31 civilians, including 24 children, and wounded 41 others. According to three survivors, no fighters from the armed group Islamic State or other military objects were in or around the school at the time.

The attack occurred around 11:30 p.m. on September 1 on the Al-Alam Vocational High School for Industry in the Alwayi Al-Thawri neighborhood of Al-Alam, 18 kilometers northeast of the city of Tikrit. The area is under the control of Islamic State, formerly known as the Islamic State of Iraq and Sham (ISIS).

“Iraq’s allies in the fight against ISIS need to put pressure on Baghdad to stop this kind of violence,” said Fred Abrahams, special adviser. “ISIS is incredibly brutal, but that’s no excuse for what the Iraqi government is doing.”

The three survivors and a local resident told Human Rights Watch that they heard an aircraft, most likely a helicopter, fly over the area shortly before midnight, followed by a large explosion at the school. The unidentified munition hit the school courtyard, where dozens of displaced people from Tikrit had gathered.

Based on a list provided by one of the survivors, the attack killed six men, eight women, and 24 children. Thirty-two people died immediately and six died later from their wounds, the survivor said. Fifteen of the 41 wounded were children.

The member of parliament from Al-Alam, Ashwaq al-Jabouri, said that 31 people died in the attack and 11 were wounded. She called on the presidency of the Iraqi parliament to investigate.

The Iraqi government told Human Rights Watch on September 13 that the pilot involved had targeted a car that the military thought was transporting Islamic State fighters. The car drove near the school and was apparently carrying explosives when the missile struck it, causing an explosion that was “far larger than normal,” the government said.

The three survivors, interviewed by phone, told Human Rights Watch that about 70 people from the extended Jurefat family had been living in the school for about two months prior to the attack. The group had fled Tikrit when the Islamic State took that city in late June. ISIS seized control of Al-Alam on June 23 after townspeople fought them for two weeks.

“There was no ISIS in the school,” one of the survivors said. “We’re all tribesmen and according to our traditions we don’t let strangers sit with our families.”

Islamic State fighters were in the Al-Alam area and the Alwayi Al-Thawri neighborhood, including at times in a police station 250 meters west of the school, two of the survivors and two local residents said. But the three survivors Human Rights Watch interviewed said there were no fighters or military equipment in or around the school at the time of the attack.

Two of the survivors and one neighborhood resident said Islamic State fighters had fired at an Iraqi government aircraft flying over the town at about 6 p.m. on September 1, approximately five hours before the attack on the school. There was no fighting in the area after that, they said.

The Iraqi military has carried out multiple attacks in Tikrit and nearby areas in its fight against Islamic State. One man who fled Tikrit told Human Rights Watch that a government airstrike on August 27 hit a home where his family and eight others, all from the extended Albu Nassir family, were staying in the village of Samra, eight kilometers north of Al-Alam. The attack killed six members of the man’s family, including two children and two pregnant women, and wounded 20 other people, he said.

In July, Human Rights Watch documented 17 Iraqi airstrikes that killed at least 75 civilians and wounded hundreds of others, including six attacks with barrel bombs. The attacks took place in Fallujah, Beiji, Mosul, Tikrit, and al-Sherqat.

The attacks revealed a pattern of aerial bombardments in residential areas by government forces using helicopters, jets, and other aircraft. The attacks hit areas around mosques, government buildings, hospitals, and power and water stations. 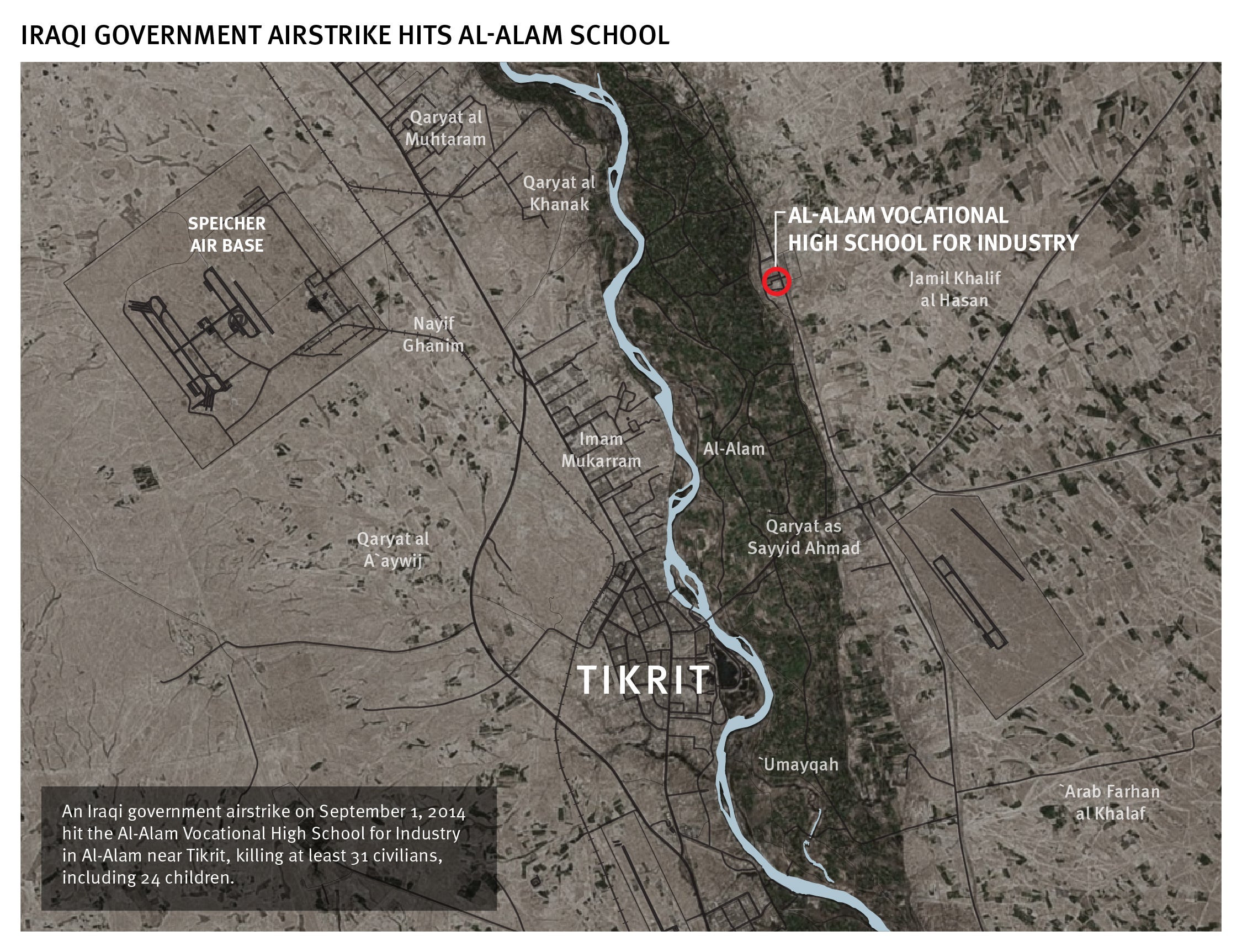 The United States has sent Iraq military aid, including Hellfire missiles, ammunition, and surveillance drones, since January. The Iraqi government’s ongoing unlawful attacks suggest that the government could use US weapons in ways that unlawfully kill civilians. On August 8, the US began airstrikes against select Islamic State targets.

Foreign governments providing Iraq with military support and assistance should ensure that their aid is not being used in violations of the laws of war, Human Rights Watch said.

The laws of war oblige all parties to take all feasible precautions at all times to minimize the risk to civilian life and to civilian objects. Islamic State forces are therefore required to avoid, to the greatest extent possible, deploying their forces in buildings with a civilian purpose or near civilians. When they fail to do so, however, the Iraqi government still needs to take account of the risk to, and likely impact on, civilians before launching an attack.

“The fight against the shockingly abusive Islamic State cannot be carte blanche for the Iraqi government to kill dozens of civilians without a clear military target,” Abrahams said. “The US and others giving military aid to Iraq need to ensure that their weapons are not being used to break international law.”

Accounts of the September 1, 2014 Al-Alam Attack
One survivor of the Al-Alam school attack said he was spared because he was near the bathrooms when the munition hit the courtyard:

The man said he also lost his brother, nephew, and niece.

Another survivor said he heard what he thought was a helicopter about 11:30 p.m. and then saw a huge explosion in the school courtyard:

I lost my father, brother, and sister, and my mother was severely wounded, which led to the amputation of her left leg. My cousin is still in intensive care. My wife endured two operations. Fourteen members of our family are severely wounded and 15 lightly wounded.

The man had shrapnel injuries in his legs and back and was evacuated first to Hawija and then to Kirkuk, both nearby cities, for treatment.

A third survivor, who was also wounded, said the men were sitting apart from the women and children in the courtyard when the munition struck. He lost his wife, two sons, a daughter, a sister, and a nephew. Five members of his family were wounded, including his son Yazin, who was six months old. “There was no fighting at all before the attack,” he said.

Two men who live near the school said they heard the attack at about 11:30 that night and quickly went to the school. One of them said that when he got there he saw Islamic State fighters keeping civilians away from the school and evacuating the wounded. “I saw no wounded or killed ISIS fighters,” he said.

The man said that he had seen ISIS fighters shooting at an Iraqi plane in his neighborhood at about 6 p.m. A few minutes later a drone flew over the area but the fighters did not shoot at it, he said.

One of the survivors said that the morning after the attack, relatives of those killed traveled in a convoy of minivans to a nearby cemetery to bury the dead. As they approached the cemetery at around noon, a munition fired from a plane struck the ground about 100 meters in front of them in what he believed to be an attack on the funeral gathering. No one was wounded.

The survivor and a local resident who accompanied the group said the relatives sought shelter in a nearby house and then took the bodies to the cemetery one by one for burial.

As of September 10, 13 of the wounded survivors were receiving medical treatment in Kirkuk, one of the survivors said. He claimed that Kurdish authorities controlling the city, fearful of the influx of Arabs from areas held by Islamic State, were not letting him into the city to see his injured relatives. When his son died in the hospital on September 8, he had to get the body at a checkpoint, he said.

Mirrored from Human Rights Watch via their Creative Commons License.